Welcome back to Enuffa.com for another edition of Awesomely Shitty Movies!

Today we'll be examining the brazenly tawdry late-80s time capsule known as The Lost Boys.  Before the Twilight movies forever ruined the vampire genre Joel Schumacher gave us teenage vampire garbage we could really sink our teeth into.  Teeth, get it??  Cuz vampires like to bite people?  With their teeth?

Buckle up and set the DeLorean for 1987, the heyday of such screen legends as Corey Haim, Corey Feldman (what's with all the Coreys??), Jason Patric, Jami Gertz, and the one teen heartthrob from this era whose career escaped more or less unscathed, Kiefer Sutherland. 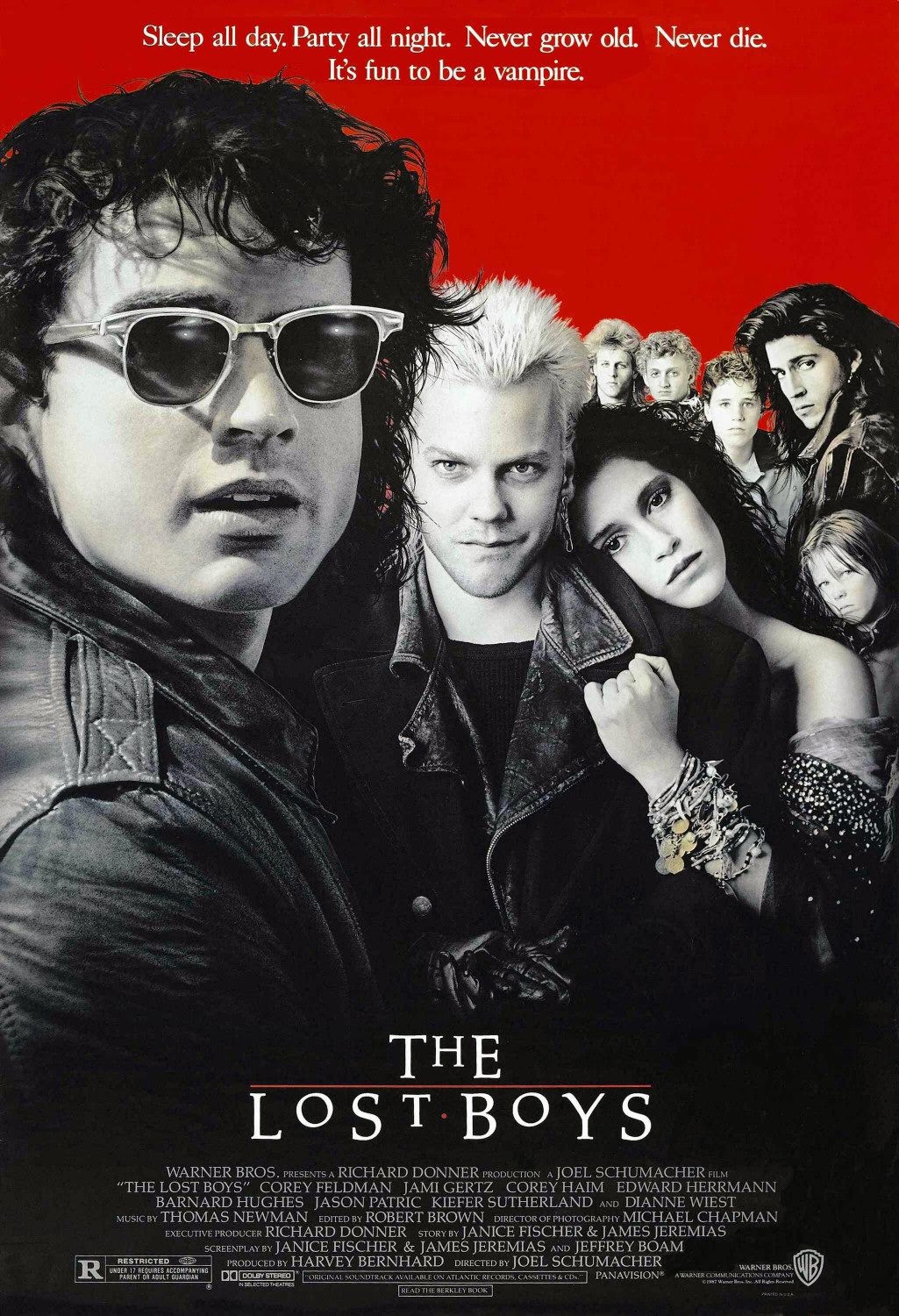 Originally The Lost Boys was to be a Peter Pan-inspired film about pre-adolescent vampires, stemming from the idea that Peter could fly and never grew old (Kiefer's character was originally called Peter, while the protagonist brothers were Michael and John, later to be Michael and Sam).  However when Schumacher came on board he decided teenage characters would be much more marketable/sexier.

The resulting film is delightfully "late-80s," from the costumes, to the heavy metal-influenced fashion sense of the teenage characters, to the awesomely dated soundtrack, to the southern California setting.  It's a quintessential 80s summer movie.  And it's fantastically dumb.

This movie's got a pretty great cast, all perfectly suited to their roles.  Corey Haim, while never ascending to the heights of great acting, was exactly right for the main character of Sam.  Sam is the audience's guide through the story, usually in way over his head and scared shitless the whole time.  Jason Patric as his older brother Michael is the character with the real arc (he goes from brooding, sullen prettyboy to brooding, sullen vampire), and he's the one whose relationship with the villains sets things in motion.  Dianne Wiest is excellent as always, as their mother Lucy.  Corey Feldman, whose childhood work was actually pretty underrated, is hilarious as the aspiring vampire killer Edgar Frog.


And of course the showstopper is Kiefer Sutherland as David, the leader of the vampire gang.  Sutherland was fresh off his breakout performance as teenage deliquent Ace Merrill in Stand By Me, and his performance here is similar, but with the volume turned way up.  In The Lost Boys he's a total badass motherfucker who repeatedly toys with the protagonists and kills rival gang members without remorse.  Great villain.

As 80s horror movies go, this one has some skillfully executed makeup and visual effects.  Simple but effective, the vampires all morph into monsters when it's time to attack, sporting thicker brows, orange wolfen eyes, and sharp fangs (it did always bug me that the vamp fangs in this movie were on the second incisors instead of the canine teeth).  The blood n' guts effects are all kept pretty understated and realistic, and are very well-crafted. 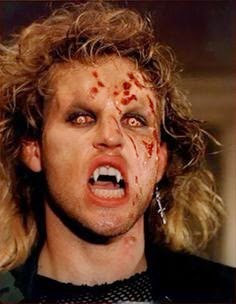 I love how horribly dated all the songs are in this film.  The main theme "Cry Little Sister" by Gerard McMann, immediately transports me back to my early teens.  "I Still Believe" by musclebound singer/saxophonist Tim Cappello is brilliantly stupid cheeseball rock.  The movie even features Echo & The Bunnymen covering The Doors' "People are Strange," which I must confess is partly responsible for introducing me to Jim Morrison & co.

Has any other movie setting so perfectly captured the essence of summer vacation?  Beach, boardwalks, carnival rides, weirdos wandering about, disposable income spent on crap like leather jackets, earrings and comic books?  I'd totally live in this fictional town of Santa Carla, vampires or no.

This movie, like many of the period, is jam-packed with insipid one-liners that may as well have been accompanied by a rimshot.  While most of the dialogue is serviceable if trite (let's be honest, I'm not expecting Shakespeare in a popcorn movie about homoerotic teen bloodsuckers) the jokes are overly silly and it seems like the writers were trying way too hard to jam humor into the film.  Thus almost every scene of horror ends up being neatly diffused with a lame joke.  Horror and comedy can co-exist, but the humor needs to be fairly subtle, organic, and effortless, rather than playing to the dimwits in the audience.  Unfortunately with The Lost Boys they went for cheap laughs at every turn.

Barnard Hughes plays Michael and Sam's grandfather, whose only real purposes in the movie are comic relief and plot convenience.  He's entirely a stock movie character - a gruff, bossy, eccentric old man who is prone to strange hobbies and interests, creeping out even his family.  He has no part in the overall story arc and is really only used as a way to explain why the protagonists are living in Santa Carla (touted as The Murder Capital of the World), and to miraculously save the day at the end.  If I ever write a piece called Most Pointless Movie Characters (and I just may) then Lost Boys Grandpa will fit right in.

While we're on the subject of pointless characters, can anyone explain why Michael's love interest Star has a little brother who follows her around?  There is literally no reason for that character to be in the movie.  He does nothing the whole time, except for one moment where he vamps out and Allen Frog shouts, "Holy shit!  It's the attack of Eddie Munster!"  They wrote an entire character into the movie just to be the subject of one punchline.

Holy jeez he looks like a douchebag.  I realize this was the 80s, the height of overly ostentatious tacky clothing, but even by the standards of the period it's awful.  Would a 13-year-old whose mom just got wiped out in a messy divorce really have the income to be dressing like this?

The Lost Boys is just a goofy, slightly horrific summer popcorn romp.  That's all the filmmakers set out to make, which is fine.  It's like a satisfying jaunt to Burger King.  You know exactly what to expect and it's easily digestible (wait, who am I kidding, Burger King is precisely the opposite of easily digestible, but goddamn it's delicious).  It's stylish and entertaining, but there's very little thought or effort required to watch this movie.

However it is possible to create complex, thought-provoking films about vampires, exploring at what cost such powers come: isolation, loneliness, unending bloodlust, tedium, having to live with murdering people, having to evade capture and prosecution for murdering people, etc.  Don't believe me?  Check out movies like Near Dark (directed by Oscar-winner Kathryn Bigelow), Let the Right One In (wonderful Swedish film from 2008 which was remade in 2010 as an almost-as-good American film called Let Me In), Interview with the Vampire (both more stylish AND more homoerotic than The Lost Boys), Nosferatu: Phantom der Nacht (a remake of the silent classic, directed by Werner Herzog), and even Francis Ford Coppola's Bram Stoker's Dracula (an adaptation of Dracula by Bram Stoker, by Francis Ford Coppola).  These films examine the subject of vampirism seriously and make us sympathize with these homicidal creatures without making them heroic (unlike a certain inane film series released in recent years specifically for little girls, that sullied the entire genre).  They demonstrate how challenging a story about vampires can be, and raise the question "What would the world be like if these things actually existed?"  They also contain moments of true horror with actual consequences, rather than showy set-pieces.

-Seriously, why'd they put the vampires' fangs on their second incisors when everyone knows it's supposed to be the canines that sprout fangs.  Christ!


-Also, why do the vampires' eyebrows disappear when they vamp out?

-I hate the scene where Corey Haim is in the tub singing "I'm a Lonely Boy."  I'm not sure why, I just really hate it.  It strikes me as totally and completely false, and yet another way to create labored comedy.

-Really Gramps?  You knew about the vampires the whole time and it never occurred to you to tell the authorities or even ANYONE in your immediate family about it before they all nearly got killed and your house got destroyed?  Good call.  So by inaction, Grandpa's indirectly responsible for what, every death in the film?  Thanks a lot, fuckface!

Despite its considerable lack of substance I still enjoy watching this romp of a vampire flick once in a blue moon.  For me it's more about transporting myself back to my preteens and the carefree summers of my youth, when I had basically zero responsibility, went on vacation, went to camp, watched wrestling, hung out with my friends, and went to a ton of movies.

That'll do it for this week's installment.  Bring it back to Enuffa.com for more nerdy, swear-laden drivel.