I'd Like to Introduce You To.....A Guide to Recognizing Your Saints

Welcome back to Enuffa.com, where we once again present I'd Like to Introduce You To.....from Michael Drinan.  It's a series dealing with lesser-known cinematic gems that you should go out of your way to find.

Yeah, I know you’re skeptical of this ever since you took your lady out on a date to see Disturbia (also known as the poor man’s Rear Window), but you’ll just have to trust me on this.  After he put himself on people’s radars with Holes he bounced around with small roles in some pretty big films, and then in 2006, he dug deep, grabbed some insecurities and emotion, and went indie.  Let me introduce you to A Guide to Recognizing Your Saints. 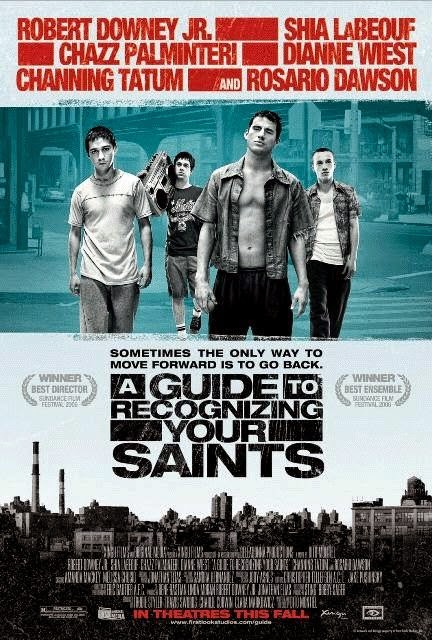 This is actually a pretty significant movie for two other actors.  Channing Tatum starred in two other movies in 2006, She’s the Man and Step Up, putting him in magazines and labeling him as the next young sex symbol.  Then, in September of that year, he came out with this film and actually showed his acting chops which, I believe, helped him land more complex roles later on.  (Side Effects for starters)  In this film, Tatum plays Antonio, best friend to the lead character of Dito.  Antonio is what you would call a troubled youth, run-ins with the law, always fighting people and has a troubled home life with an abusive father.  It’s not a stretch for Tatum to play the role of tough guy troublemaker due to his physique (as well as a turbulent childhood), but its the conflict within his character of trying to hold onto Dito as a friend because he feels a responsibility toward him and his father that really shows his range.  There is also an attitude toward his brother where you know he cares for him but refuses to show him.  It becomes a pivotal part in the film and Tatum owns it.  Even nowadays, when you mention a movie and say Channing Tatum is in it, a lot of people simply shrug it off.  Once you see this movie, you will be hard pressed to dismiss him so easily.

Then there is the inimitable Robert Downey Jr. who was, in a way, trying to make a comeback (technically not a comeback since he never really left or stopped making movies) from his legal troubles and drug addiction.  Downey went indie as well to show that he was more committed to his craft and had kicked his old habits.  He had a good turn in Kiss Kiss Bang Bang and took on smaller roles like in Good Night, and Good Luck.  This film was just one more notch on his way back to the top until the role for Iron Man knocked on his door and found himself back on top.  Thank goodness too, because its hard to imagine my movie watching life without Sgt. Lincoln Osiris. (“Cover me, limp dick fuck ups!”)

Okay, now about the film.  It’s based on the autobiography of the same name written by Dito Montiel, who also directs the film.  It recounts his days growing up in Astoria, New York in 1986, his relationship with his father and the friends whom he surrounded himself with, what they mean to him and, how he left all of them.  Downey plays Dito in the present day, after he has already left New York for California.  He receives a message from his mother (played by the great Dianne Wiest) that his father (the incomparable Chazz Palminteri) is sick and he should come home and see him.  This begins the story.  The film uses flashbacks to 1986 as you are introduced to a teenage Dito (LaBeouf) and begin to understand his friends,  the strenuous relationship with his father and how it all leads to him picking up and leaving.  When Dito comes home to see his father, the film revisits these characters in the present day to see how they turned out.

So, let me be clear, while this isn’t Downey Jr.’s greatest performance ever (Chaplin), it is rare to see him in a role where he displays the kind of emotion he does with this character.  He doesn’t have many scenes in this film but makes up for it with the scene where Dito finally confronts his father on how he feels about him.  It is certainly the highlight of the film.  There’s a rage that you don’t typically see in Downey’s other roles that makes this performance so refreshing and so riveting.  This is a film that every Robert Downey Jr. fan should see to really get acquainted with the actor and his full range of talents.

Alright, you were warned in the beginning so here it goes.  LaBeouf is a revelation in this film, especially if you’ve seen his work in other films before seeing this.  The impact and success of this story rests on his shoulders.  He digs deep for this role and carries the emotional weight of Dito while the character is succumbing to it.  There is a constant tug and pull with the teenage Dito between his obligations to his father, the love of Laurie (who is kind of obnoxious), the loyalty to his friends and the desire to leave and go to California.  With that kind of conflict, LaBeouf is all in.  Trying to avoid spoilers here, the scene with LaBeouf and Chazz Palminteri in the bathroom after an incident with one of Dito’s friends, has LaBeouf putting on a clinic.  In my opinion, a lot of that has to do with Palminteri himself and how he handles the character of Dito’s father but, nevertheless, LaBeouf displays the kind of talent you always figured he had but just never took on a role that allowed him to showcase it.  Thank goodness this role came along.

A Guide to Recognizing Your Saints is a cross between Kids and Mean Streets.  Its a gritty tale of loyalty, love and never forgetting where you came from.  There’s an innocence to this film and it’s characters that lies under the violent, angry feel to it.  There’s a lot of love in this movie but it keeps getting pushed aside until the characters realize where they’re at, and its so great when its finally addressed because it makes you think about the people in your life and the influence they had on you.

A Guide to Recognizing Your Saints is streaming on Amazon and Vudu for $2.99 and for free on Hulu.

Check out the trailer
Posted by Justin Enuffa Ballard at 11:20 AM