It's that time again peeps.  Another round of Enuffa.com PPV predictions! 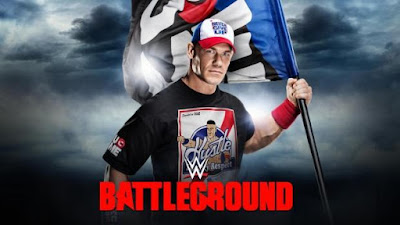 Coming this Sunday, off the heels of the rather nonsensical WWE Draft, is this year's Battleground PPV!  It would seem the draft will have zero effect on this show, and one of the issues I have with these drafts is that, when immediately followed by a PPV, they usually result in multiple "interbrand" matchups right off the bat.  If WWE were smart (They aren't), they'd have scheduled the draft the night after Battleground, so the SummerSlam lineup could be build based on the new rosters.  For example, the already-announced SummerSlam main event, Brock Lesnar vs. Randy Orton, is an interbrand match now.  Wow, that was quick.

Anyway, this years BG looks decent on paper.  There are at least two or three highly intriguing bouts on the card, so of the probably 210-minute running time, at least an hour of it should be fun.


US Championship: Rusev vs. Zack Ryder 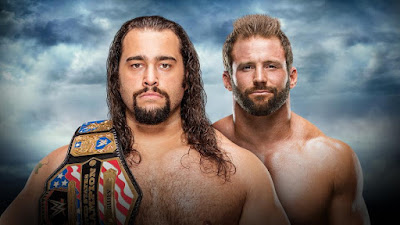 Both secondary Title matches on this show are gonna stink.  Both challengers are jobbers who fell into their respective Title shots.  Why can't WWE figure out how to make secondary Titles mean anything? 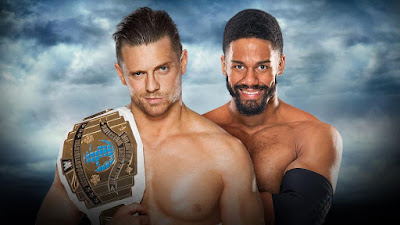 The Miz is a good Honky Tonk Man-type I-C Champ.  Darren Young is a skilled wrestler with a stupid gimmick where he apparently can't take a dump without asking advice from Bob Backlund.  He won the #1 Contender Battle Royal because Baron Corbin and Apollo Crews eliminated each other.  Way to build Young up as a credible challenger guys.

Justin's pick: The Miz retains
Dan's pick: Have they been hyping Darren Young just to have him lose? I don’t think so. Young for the win. 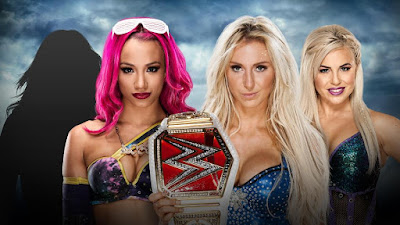 I love that Sasha is back on TV, building to the inevitable SummerSlam match with Charlotte.  I love that there are two Women's matches on this PPV.  I don't like that there's another lame tag match after we just had one at Money in the Bank.  I'm guessing Sasha's partner will be Paige, but since there were three NXT call-ups this week it could also be one of those.  Nia Jax would be cool, but she's much better suited as a heel.  It's too bad Bayley wasn't called up, because Sasha picking her former archenemy would be great, a la Savage and Steamboat teaming up at the first Survivor Series.

I also love that there's a women's feud that doesn't involve the Champion.  This is how you add depth to a division - create several feuds that are about something.  This match should be pretty swell if given enough time.

The New Day vs. The Wyatt Family 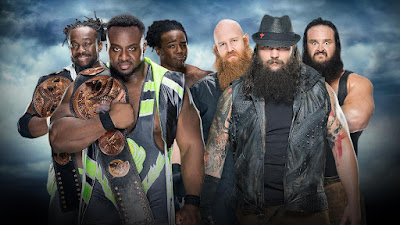 There are also two six-man tags on this show.  I couldn't tell you the last time that happened.  This feud is just odd.  You have a babyface team who are better as heels vs. a heel team that should've been turned into "character babyfaces" long ago.  The match itself should be fine.  The Wyatts have been split up though, so I dunno where this feud goes from here. 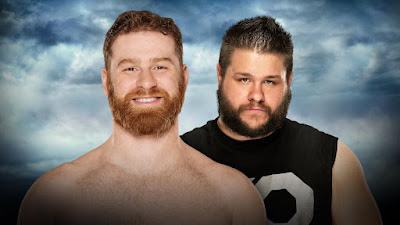 This is gonna be great, and it's been billed as the blowoff for this feud.  What's stupid is both Owens and Zayn got drafted to RAW.  If WWE were smart (They still aren't), they would've split these guys up to keep them away from each other until they need 'em to fight again.  Either way, this'll be excellent. 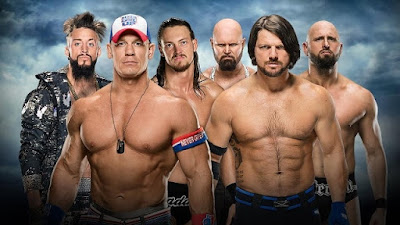 This is clearly a placeholder till SummerSlam when Cena-Styles II inevitably takes place.  Both guys are on Smackdown, so this feud can easily continue.  AJ's boys got drafted to RAW though, along with their former boss Finn Balor.  So I dunno what happens there.  Kinda stupid really, why break up The Club this soon?  This match will be alright.

Justin's pick: The Club wins, giving AJ a 2-1 lead over Cena going into SummerSlam where Cena inevitably gets his win back.
Dan's pick: Gotta go with the bona fide G’s here. 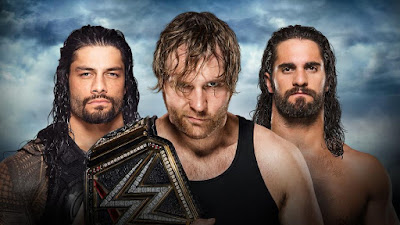 It's so odd this match is happening at a B-show.  Why wouldn't you save this for SummerSlam?  Given Reigns' suspension they probably should've just written him out with an injury and done Ambrose vs. Rollins here.  But whatever, this match'll be great.  Maybe they'll have a rematch in August.


And there's your lineup.  Lotta filler in the first half, but the second half should be solid.  We're all biding time till SummerSlam weekend.  Between that show and the NXT TakeOver special we're in for fun times.  Enjoy!
Posted by Justin Enuffa Ballard at 12:36 PM