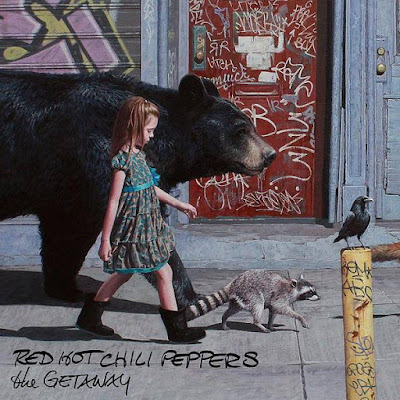 When the Red Hot Chili Peppers released three new songs in advance of dropping their eleventh studio album, The Getaway, I was very excited for the new album. The new songs sounded unlike anything I had heard from the band before and I was intrigued at the overall sound and direction the band was taking. They went with producer Brian “Danger Mouse” Burton (horrible stage name) instead of legendary producer Rick Rubin, who had produced every album of theirs since 1991’s BloodSugarSexMagick, automatically changing the dynamic of the band.

I was pumped. I was ready. June 17th came, the album was released and all I heard from critics and a lot of fans was a lot of crying because it doesn’t sound like BloodSugarSexMagick or Californication.

And to that I say to all of you….Go. Fuck. Yourselves.

Look, I get it. These kinds of things tend to get said when artists stick around for over 30 years and band members leave and all that jazz. When RHCP released I’m With You, their first album with new guitarist Josh Klinghoffer, people didn’t like it. They called it inconsequential, boring and muddled. They didn’t have those monster funky basslines and they seemed to steer away from that frenetic, edgy music that made them ‘90s alternative rock gods, and it really pissed me off. I’m With You is a very solid record and Josh Klinghoffer actually breathed new life into the band and set them on a different course, allowing them to expand on their sound and try new things. Now, it seems we’re getting the same kind of stuff with this new release which is a very good album.

People who go into this album hoping for another BloodSugarSexMagick or Californication are going to be disappointed. The change in producer should’ve nipped those expectations in the bud. Besides, RHCP are the kind of band who don’t want to make the same album over and over again and I for one am not interested in that either.

The Getaway does have those big funky basslines and really big drumming from Chad Smith. All of the songs are still rooted in Flea’s bass playing, however it’s all been scaled back and balanced out with more melodic, slower, steadier instrumentation. Strings, pianos, synths and backing choral arrangements are used to enhance the songs without making them sound too big and over the top. Josh’s guitar playing is primarily used for aesthetic purposes, with only a few small solos popping up in a few songs.

There are a few tracks that resemble that signature RHCP style and sound, one being the lead single “Dark Necessities” and the other “We Turn Red”. Other than that, the rest of the songs are slow, melodic pieces with only flashes of that style popping up here and there. However, you’re not going to get a full song that brings back the “old” Chili Peppers. Nope, not happening here.

And that’s really not a bad thing at all. In fact, the strength of this album lies in its resistance to fall back on old habits. Where Josh brought in a new and refreshing sound to the band on I’m With You, this new album finds Josh’s playing on an entirely different level. On “The Longest Wave” Josh’s guitar is used to add color behind Anthony’s sweet vocal melody and rhyme schemes. It’s one of my favorite tracks off the first half of the album mainly due to Josh’s keen awareness of picking and choosing his spots to play in order to add to the song sonically. He also really comes through on the chorus of the album closer “Dreams of a Samurai” giving the song a little bit of muscle. Brilliant guitarists know when to come in and when to back off and Josh plays it beautifully on this album.

The new sound is everywhere on this but doesn’t stray too far from what the band does best. The shoutout-filled “Detroit” really brings that funk groove that we’ve all come to love with RHCP, with Anthony’s clever turn of phrase like “Am I on the right side of the left side of your brain/Can you see the rising of old yesterday's remains” that makes the track a standout.

Another of my favorite songs is “Goodbye Angels," a track that starts with a fantastic, tense buildup that fits with the suicide theme of the lyrics as you wait for that crucial tipping point moment when the song breaks out and all bets are off. It’s a well written song and Anthony’s “ayo ayo ayo” are a welcomed thing to hear for appreciators of his vocal style. The band sounds so good on this track, tight and together. The chemistry is strong here and it shows at the end of the track when Chad, Flea and Josh really let loose with their playing and feed off each other, even though I was hoping for a little longer jam session, but whatever. I bet it would sound incredible live.

“This Ticonderoga” immediately kicks off with a heavily punk influenced, fast, furious and loud guitar, paced by Chad’s drumming. The tempo changes in the song are fucking great too. The main riff is compact and tight, violent like a mosh pit at full ferocity and then, the song slows down allowing you to take a step back, take a breather and then it tosses you back in at full force. It doesn’t sound like RHCP, aside from the slow parts. In fact, I’m not sure who it sounds like but it really kicks ass. They played this song at their album release party and it’s a fucking burner.

The biggest surprise for me was the dance pop, almost disco-y track “Go Robot”. It was the last thing I’d expect to hear on a RHCP album. The song incorporates synths without them being the center of the song and Flea’s double bass track sounds perfect without being overbearing. However, “Go Robot” is also gives me my first letdown of the album. There’s a couple of buildups that don’t go anywhere and the song really serves the band to do more instrumentally at the end but winds up simply fading out.

There’s an Elton John and Bernie Taupin collaboration on this album too; they contribute as co-writers on the song “Sick Love”, a melodic and sweet sounding song with a guitar solo that is thin and fuzzy and could be mistaken for a synthesizer if you aren’t listening closely.

For me, there are only two forgettable tracks on this album, “The Hunter” and “Encore”, with the former being the only song I’ve ever heard Anthony’s singing drag, making me sigh with impatience, just aching for the song to get somewhere, anywhere. There’s also nothing in the song musically to keep my interest. “Encore” has a few guitar parts that are eerily similar to “Pretty Little Ditty” off of Mother’s Milk, the song sampled for that horrible “Butterfly” song by Crazy Town. I’ve been trying to forget that song and whatever they can do to not remind me of it will only help all parties.

The Getaway is consistent in sound and feel. There isn’t a song on here that feels out of place, even the throwaway songs. Nothing seems forced on this album and every song is concise and transitions perfectly into the next. But somehow that might not be good enough for all those fans and critics out there looking for the band to satisfy what they think RHCP should sound like, instead of the band themselves deciding that.

Truth is, I love those old classic RHCP albums just as much as the next person, but there was a time and a place for them and it was back when they were originally released. The band is off in a new direction and it’s nice to see that after thirty-odd years RHCP are looking for new ideas and new ways to be inspired so the music sounds fresh and invigorating. It will be challenging for some fans since it will fly in the face of their expectations, but so what. The Chili Peppers aren’t resting on their laurels and are finding ways to infiltrate new musical spaces with their personality and style.


Standout tracks: “We Turn Red”, “The Longest Wave”, “Goodbye Angels”, “Detroit”, “This Ticonderoga”
Posted by Justin Enuffa Ballard at 9:09 AM