When I started watching wrestling, I became a Smackdown! Guy. You could keep Cena, DX and Rated RKO. I was always up to watching London and Kendrick defend their tag titles, or Finlay dropping people with his shillelagh, and especially watching The Undertaker being the standard bearer on Friday nights. Now, with the brands split once again, I’m proud to be able to wave the blue banner once again. While not as packed as Raw seems, I believe the appeal to Smackdown will reveal itself to be a place where those who have been stifled in the past can get their chance, exemplified in the current champion. Dean was held down and went on a far too long losing streak before breaking through despite this, which may become the theme of Smackdown! And with the show coming from my hometown tonight, I don’t see a better time for me to start covering the Tuesday night show.

I will start by saying that I’m very optimistic about the commentary team. I’m firm in my belief that without Michael Cole and Byron Saxon, JBL will prove to be a good color commentator. Combined with the fantastic Mauro Renallo, and David “I finally have something to do” Otunga, I think I’m going to enjoy this commentary team.

The show opened up and immediately felt different from RAW. The first people in the ring were the wrestlers, with Shane and Daniel coming out after, as opposed to Steph and Mick Foley coming out to bring the wrestlers out. Also stressed was the laissez-faire style of booking the the men in charge are taking, setting up a 6-man match later with a spot open for the winner of a battle royal, which was the first match of this new era of Smackdown! The other 5 participants are John Cena, Bray Wyatt, Baron Corbin, Dolph Ziggler, and AJ Styles.


Apollo Crews won the Battle Royal for the 6th spot in the number-one contender’s match.

The battle royal was very basic, but still effective. Tag teams stuck together for the most part, and there wasn’t too much chaos happening at the same time 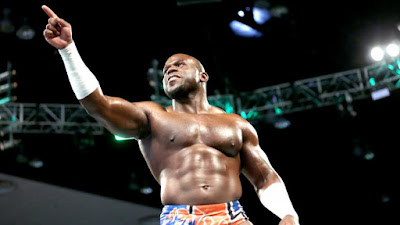 The final four came down to Kane, Apollo Crews, Kalisto and Zack Ryder. Zack managed to miss a dropkick and slip off the top rope when going for an elbow all within two minutes. Kane wiped out Kalisto and Zack before Apollo ducked a clothesline against the ropes, dumping Kane out to win.

Post match, Apollo said there was no time to celebrate, and that he would after he won the main event.

This wasn’t a bad segment, used mostly to justify why Apollo would be in the main event alongside established main eventers, and Baron Corbin.


Becky Lynch made Natalya tap out to the DisArmer

The match was an exciting back and forth contest, with both women trying to one up each other throughout. They seem to be trying to get Becky over as some kind of high energy, literally fiery babyface, as she yelled a battle cry to the gods more than once during the contest. The match was overall better in my opinion than their Battleground contest, with more emotion and better technical segments. It was a very good match that ended definitively. 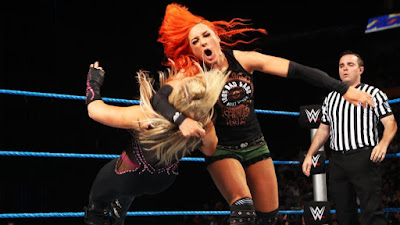 After the match, every woman on the brand came out and talked about how they were gonna be the women’s face of Smackdown! Eva Marie had the most ridiculous and awesome entrance, complete with some kind of prerecorded announcer. They’ve finally accepted no one likes this woman, and are embracing it. Awesome.


The Miz cut the Wrestlemania Brother Love promo, and if you get that reference then congratulations. You’re the kind of person that keeps me going. He interviewed himself and thank God Randy Orton came out to interfere.

I really like happy Randy Orton. After years of a pissy demeanor and serious assholery, he seems legitimately glad to be here. They traded back and forth before Randy challenged Miz to a non-Title match tonight.


Randy Orton killed Miz because Miz is a dumbass

Because within a minute, Miz threw Orton out of the ring and Orton landed on his shoulder. Randy shot up, Randy swore, Randy got pissed, and Miz KNEW he fucked up. The match ended about three minutes of heat later with 2 RKOs. Miz may suffer the fate of Ken Kennedy of old. OR at the LEAST lose the IC title. Sorry, brother… 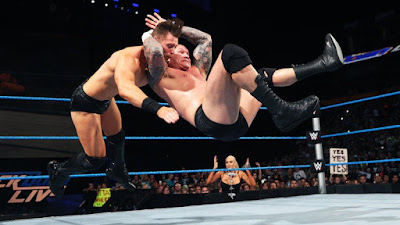 I was making lunch for work, and came back to see Heath Slater on my TV. Shane was telling him to basically piss off. Then Rhyno came in and Gored the ghost of 3MB out of Slater. And Mauro recognized him as the former NWA champion, so I’ve never been happier.


Main event time, and throughout the night all the competitors gave promos talking about how they wanted to be the number one contender. It was a great touch that emphasized the message of wrestler focused entertainment.

The match went very well, with the heels occasionally teaming to beat down a face, before turning on each other. There was almost never more than 3 guys in the ring, which was a good thing in this match. This main event was used to establish who would be the big players here on Tuesdays right off the bat. You knew that Cena and Styles would be, but the other four established themselves in this match. A double Tower of Doom spot brought us back from the final commercial break, where stereo superplex/powerbombs happened at opposite posts and shook the ring in an awesome looking spot. 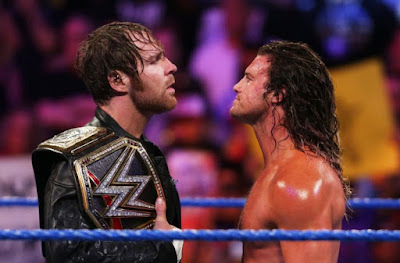 There was a great focus on Crews and Corbin in the match, who needed the attention more than the other four in particular. After a parade of finishers, Ziggler landed a superkick on AJ Styles to win the match in spectacular fashion.


The show was a very good introduction to what will become the standard on Smackdown hopefully. I’m glad to be able to watch the blue brand with pride and, incredibly, joy for the first time in years. Definitely a show to watch once again. I’ll see you all next week.
Posted by Justin Enuffa Ballard at 8:56 AM