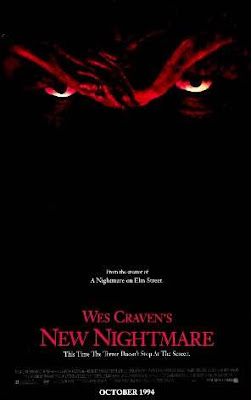 Freddy Krueger is one of the Big Five when it comes to your slasher types. Along with Jason, Michael Myers, Leatherface and Chucky, ol' Freddy has been around for decades, hacking up teenagers and making jokes all along the way. A long series of sequels, each varying degrees of quality, really watered down Frederick. This was a character that was a demonic child molester who murdered people in their sleep.  He should have been the scariest of the bunch. Instead he became comic relief. And then the studio killed him.


Until Mr. Craven decided to bring him back to his actually frightening roots in New Nightmare. Very much a sort of prequel to Scream, this film within a film feels very fresh and original for what had become a stale premise and character. Freddy is totally scary in this, totally serious, and totally bloodthirsty. The premise is Freddy's trying to come back as Wes gets the band back together to make a new Nightmare flick. Heather Langenkamp plays herself as a doting mother whose son is experiencing a lot of the horrible things she did during her run in the original films.
It really amps up when Freddy comes back on the screen. The stripped down, more organic claw is cool as shit, as is his new look with his black overcoat (‘Freddy's the same'...BUT HE'S GOT A NEW COAT!').


The "meta" take on this whole film within a film really plays well with this new version of Freddy. For the first time in years, he's scary and an actual threat. It's a pleasure watching this movie. 'Tis a shame it didn't do better at the box office so we could see more of this version of Freddy. He's much better when played as a straight up, murdering son of a bitch.

THE BAD: The plot focused far too much on the kid. Sure, he's the reason Heather gets dragged into Freddy's nightmares again, but the kid character stinks and is pretty annoying.

THE DUMB: The ending is a little "been there, saw that" as we're back in Freddy's realm. But it's not awful. Doesn't take away from the movie as a whole.

SHIT OR HIT: Total hit. One of the best of the Freddy flicks.
Posted by Justin Enuffa Ballard at 3:22 PM