Everyone's favorite wrestling hater is back to offer his predictions on Sunday's WrestleMania spectacular!  Take it away Brando, ya flyin' douche you.....

WrestleMania. The Super Bowl of bad acting and man-tights. The Holy Grail of make-believe. So how many is this now? WrestleMania 35? 67? No answer required because I couldn’t care less. Superfan Editor sent me the list of matches and corresponding pictures. I’m surprised he found the time. I think he’s working on a recap of a backyard match between four 10-year-olds in Saigon. Anyways, from the list for Sunday, it looks like this thing is approximately 13 hours long. I understand it’s the biggest pretend event of the year, but Christ almighty. Real or fake, I don’t think a “sporting event” should eclipse the time it takes to fly to Mars, or for Derek to read a book. But that’s just me. Let’s get this bullshit over with… 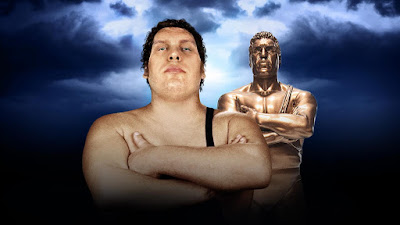 I have no clue what this is. I don’t know who’s involved in the match or what the point is. So we’re off to a great start. All I got was a picture of that behemoth. Forgive my vulgarity, but can you imagine the mule on that guy? They should have used him to find oil.

The Pick: I’m sure someone wins.


The Usos vs The Dudley Boyz – Tag Team Match 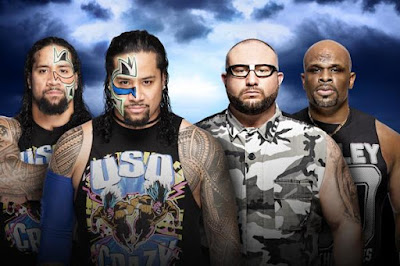 The Usos are wearing shirts that say “USO CRAZY.” Get it? LOL!!! I guess the war-paint is alright, but what the hell do I know?  They seem like a formidable tag team?.. ¯\_(ツ)_/¯      On the other side, The Dudley Boyz picture resembles a photo of Dave and one of his exes. So there’s that.

The Pick: I’ll go with the Usos. What difference does it make?

Back in the day when I would actually watch this horseshit, there were, maybe, two women who wrestled. Three, if Chyna is considered female on whatever planet she’s from. Now there’s 10 fighting at once like there’s a shoe clearance at the UGGs store.  Hopefully they just fight and don’t go yipping at each other on the mics. Because if you wanted to watch 10 women squawk at each other about nothing, you could just watch The View. However, I will say this…you got a better shot of an actual fight breaking out during this than at any other point in the night. Because I don’t care what business it is or where they work…there is absolutely ZERO chance that all 10 girls get along. ZERO. Take any girl you know. I’ll bet you any amount of money she doesn’t like a total of 9 other girls she works with. If she claims she does, remember she’s just lying so she‘s right and you’re wrong. It’s a classic move.

The Pick: I only know who one girl in this photo is, and that’s Paige. So I’ll go with her. Or whatever team she’s on, or however this works. 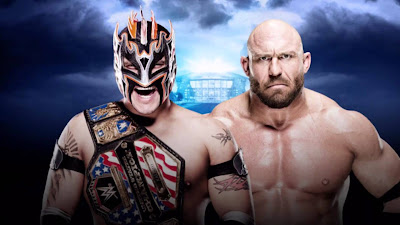 After a journey which I’m sure started with selling oranges at an intersection or running a Taqueria stand, Kalisto has worked all the way up to US Champ. It’s the American Dream in true form. Bravo, Masked Man. His no-neck opponent looks like Miggsy, only masculine.

The Pick: Kalisto tries to land a flying Burrito off the top rope, but Ryback catches him, and gives him a steroid-suplex into the next dimension. 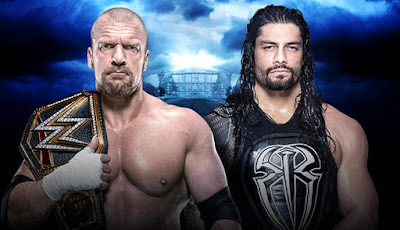 I’ve gathered from my sad friends who watch this garbage that this Reigns fella ain’t working out. So I don’t understand why he’s always fighting for the biggest prize. Then someone was trying to explain to me all the things involving Triple H and the WWE nowadays, but 40 seconds in I faked a heart attack so he’d stop. He seemed offended an hour later when he saw me back at the bar drinking a beer. He wasn’t buying my story that I healed like Wolverine, so he called me a jerk and walked away. The nerve of some people.

The Pick: Reigns. Because how long can they trot out a middle aged man as champ?


Shane McMahon vs The Undertaker – Hell in a Cell Match 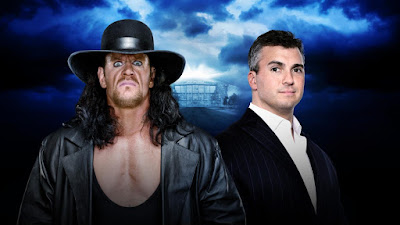 I just….I just don’t even know where to begin with this pile of feces. A senior citizen fighting a trust fund douchebag in a cage isn’t my kind of entertainment. I'd rather watch Danny jog (Just kidding, he doesn’t jog). And I’m fresh out of fucks to give about the pretend stakes in this match. If you’re a WWE fan (God help you), how do you even defend this idea? Look at the photo. It looks like the flash went off right as Undertaker realized he was crop-dusted by Shane. Also, when you’re old enough to have witnessed the Civil War, you should probably knock it off with the eye makeup. Just sayin.

(Editor's Note: I've been a diehard wrestling fan for 30 years and I approve Brando's take on this flim-flam of a match)

The Pick: Undertaker. Somehow Vince has his hand in this match. Too predictable. 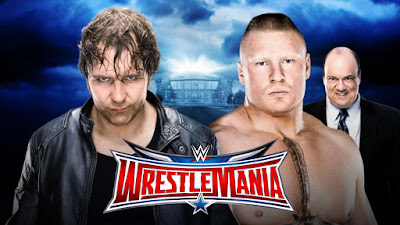 In my limited viewing of Lesnar in UFC, I noticed he has the build and, most likely, IQ of a brick shithouse. Ambrose looks like he sleeps in his car, hasn’t showered in weeks, and is about 6 months behind in child support payments. If that was a role the WWE was desperate to fill, they could have hired Scotty Pickles years ago. I have no idea who the weirdo is in the background, but he’s creeping me out. That’s the face of nightmares. If that was WWE’s intention, again, I don’t understand how Scotty isn’t on their radar. He’s a star waiting to shine.

The Pick: Lesnar. All he really needs to do is headbutt the other guy once. Look at that thing. His heads the size of a Buick. A thick, dense, empty Buick. 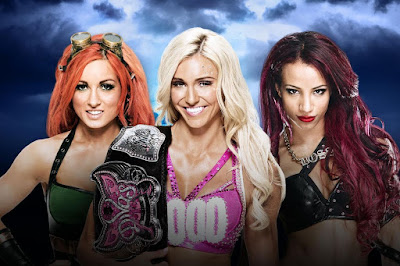 Another gal fight? Is this on the Lifetime channel? Hey I think it’s great they’re getting this much play during the PPV. Just hope they give the ring a quick sweep after they’re done. It seems Ric Flair's kid still sits atop the estrogen kingdom. Good for her. One of these other ladies is sporting orange-ish hair, and wearing goggles that would only be used while welding something, or if you were in The Chronicles of Riddick. So there’s no explanation for this accessory that isn’t incredibly stupid. None. The 3rd opponent has a chain that says “BOSS.” Oh are you the boss, sweetheart? You call the shots, do ya? Piece of advice…being bossy doesn’t make you a boss. It just makes you a pain in the ass. And here’s a spoiler alert…you’re all bossy. There, I said it.

The Pick: I’m just going to assume the Nature Boy gets involved at some point to help his Nature Spawn. Charlotte keeps her bedazzled belt.


The New Day vs The League of Nations 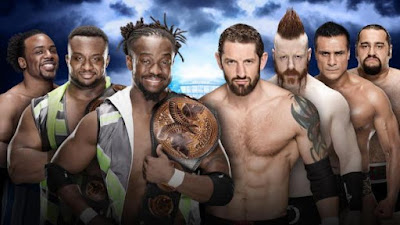 The Pick: New Day wins one for the good ol’ U S of A, after escaping the Bangers & Mash, Molotov Cocktail, Tequila Sunrise, and Royal Flush. 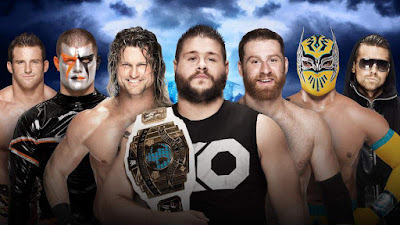 Go fuck yourself with this. You needed seven of these assholes in the same fight?  And look at this crew. I’m rooting for the ladder. I’m assuming the face-painter is “Stardust.” If you’re a grown man, and you look like that when you go to work, I think you need to have your name on some kind of registry. Maybe that’s harsh, but I feel like parents have the right to know if you live in their neighborhood. Because when you’re dealing with children, they have a tender sensibility. And I don’t think they should be around someone who looks like a murdering clown, wearing a gimp suit. I guess I’m old fashioned.

The Pick: What the fuck is a Miz? Is that like The Wiz? If it is, I’ll go with him, because nobody beats him. NOBODY! 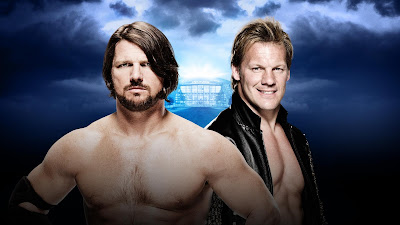 This is the last match on the list I was given, thank Christ. While writing this up, I’ve continuously doubted my friendships with people who are fans. Honestly, if they dressed like Teletubbies, I’d be less embarrassed to know them. And then there’s Justin. Justin enjoys wrestling more than I like air. When he talks about it, it’s with the exuberance of a pubescent boy discovering himself. If only he applied the same energy to doing something, I don’t know, productive or meaningful, the world might be a better place. But I digress...This match seems to be your run-of-the-mill kind of awful. Nothing fancy. Danny’s a big fan of Jericho. But he’s also a big fan of those horrid Mad Dog drinks, so that oughta tell you enough about him. Somehow, AJ Styles has the same haircut as my 60-year-old aunt. So that’s nice. Good thing he has a beard or he’d be in one of the Diva fights.

The Pick: We’ve all already lost. You for watching Sunday. Me for pontificating on the subject. Humanity for allowing the event to even exist.