Monday Night RAW: Shane Should Be In Charge for Realsies

Last night's RAW left me as optimistic about WWE's main roster as I've been in probably two years.  For the first time in 2016 RAW had a sense of urgency, like Creative actually gave a shit about what they were churning out.  I have to think Shane McMahon was contributing offscreen as well as on, because it makes no sense otherwise that a creative team demonstrating nothing but cosmic ineptitude for months suddenly becomes competent again simply based on this week's pretend authority figure.  Leave aside the fact that Shane being in charge onscreen makes zero sense and renders his entire two-month angle with The Undertaker meaningless, and that The Wyatts and The League of Nations have no reason to dislike each other.  This was easily the most entertaining RAW so far this year, and if Shane was indeed in on the Creative for this show, he needs to be given much more rope going forward.

First off, this show had three very good matches, one of which was easily PPV quality.

AJ Styles vs. Sami Zayn was in my estimation AJ's best WWE match to date, proving wrong any doubters who thought he'd have trouble adjusting to the 'E style.  It certainly didn't hurt that he was in there with Zayn, who's become one of the best in-ring talents in the entire organization, but AJ looked like a major player here, right at home in McMahon's ring.  AJ definitely should've won at WrestleMania, but in the past eight days he's been booked with tremendous momentum and I'm sure at Payback he'll come off as a major threat to Roman's Empire. 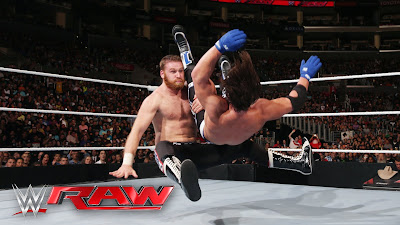 Another standout match was Charlotte vs. Natalya; no surprise given the quality of their previous bouts.  Nattie was over HUGE, by the way.  The crowd went nuts when it looked like she won the belt.  Nice to see such a hot crowd for the women.  I assume based on Nattie's DQ win that she'll get another crack at the PPV, and that should be a classic.  No sign of Sasha or Becky, so I'm not sure what the plan is there.  I'm hoping they keep Sasha chasing Charlotte till SummerSlam so she can get a huge victory in Brooklyn.

The third good match was Kevin Owens vs. Cesaro for a shot at Miz's I-C belt.  This was another fine contest with two laugh-out-loud Owens moments.  The first was when Owens had Cesaro in a headlock and screamed, "I have the best headlocks!  Headlock master!"  I desperately hope this turns into a crowd chant and/or a T-shirt.  The other occurred when Owens rolled out of the ring in frustration, swatted JBL's hat off the commentators' table, and then picked it up for him, saying "I got carried away John."  Byron Saxton said something to JBL about the exchange, and JBL calmly replied, "Kevin Owens is a nice person.  He's a gentleman, Byron."  Cracked me up.  Anywho, Cesaro won the match and is now in line for a shot at The Miz. The Miz, by the way, is finally being treated like a big deal.  I dunno if it's because Maryse is back or what, but it feels like the company actually cares about getting him over.  I hope it lasts because I was a huge Miz fan in late 2010/early 2011 when he was red-hot.  They've been wasting his considerable potential for about five years now.  Cesaro should chase that belt for several months.  Have Miz get himself DQd and counted out or win with a handful of tights, but keep the belt on Miz for a while so its equity doesn't suffer.  Like another secondary title I could name....

How pissed must John Cena be now that the US Title, which he spent so much time and energy rehabbing into a prestigious championship, is once again a worthless American flag-bedecked trinket?  First the Kalisto-Ryback match gets bumped to the 'Mania preshow in front of maybe a 10% full stadium, then Kalisto isn't even on RAW the night after, then he jobs out in a tag match on last week's Smackdown, then he's apparently kayfabe injured on last night's show?  So yeah, Cena must be pissed.

The other big moment last night belonged to Karl Anderson and Doc Gallows, who debuted by attacking the shit out of The Usos.  This was simple and executed perfectly, and made Guns & Gallows look like stars.  As they were leaving ringside through the crowd I was reminded of an early Hall & Nash segment from WCW.  That's how well these guys carried themselves.  The tag team division just got more exciting (and the additions of Enzo & Cass and The Vaudvillains don't hurt either). 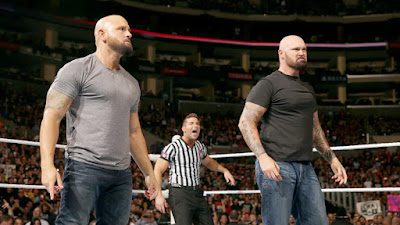 All this is leading to a Payback lineup which on paper smacks the everlovin' crap out of WrestleMania's.  I'm speculating on many of these bouts, but from where I sit Payback looks like so:

Roman Reigns vs. AJ Styles - WWE Title
Dean Ambrose vs. Chris Jericho
The Miz vs. Cesaro - IC Title
Kevin Owens vs. Sami Zayn
The Usos vs. Anderson & Gallows
Charlotte vs. Natalya - Women's Title
The New Day vs. ?? - Tag Team Title
Wyatt Family vs. League of Nations (It's a feud that makes little sense but the match should be fun)

That there is a fine-lookin' PPV.  Where was this sense of urgency and freshness leading up to WrestleMania, I ask you?
Posted by Justin Enuffa Ballard at 5:02 PM