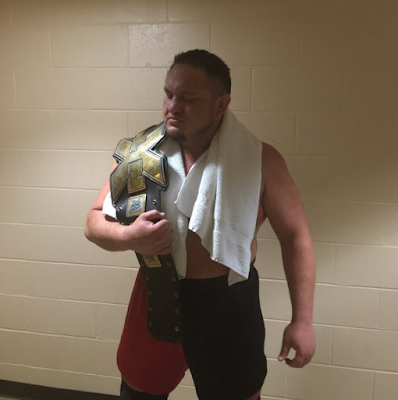 Less than a day after I state that I can’t wait for Samoa Joe to be NXT Champion, I get the news that he dethroned Finn Balor at the NXT house show in Lowell, Massachusetts. In an era where it’s almost taboo for something important to happen while the cameras are off, the fact a title changed hands at a main event is almost unheard of. The last time the titles changed off camera that I can remember was When the team of Paul London and Brian Kendrick defeated Cade and Murdoch while in South Africa for the World Tag Titles in 2007 (That’s a good trivia fact for you.)

On the cynical side, though, this may be a set up for Finn to gain the title back soon. In the aforementioned title change, Cade and Murdoch regained their titles three days later on the same tour. Until Samoa Joe comes to Florida with the belt and stands in front of the TV, I remain excited yet skeptical about this turn of events.

Then again, I was this way when Ishii won the ROH TV championship. And now we’re on day 63.

Posted by Justin Enuffa Ballard at 8:55 AM