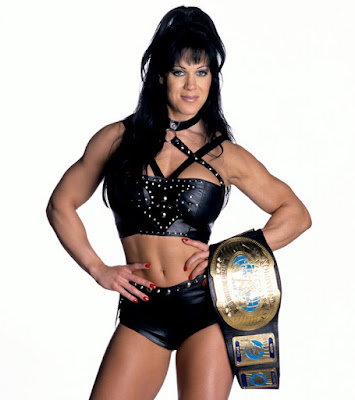 In yet another case of a once beloved wrestling star dying tragically young, Chyna (Joanie Laurer) was found dead in her home yesterday at the age of 45.  Sadly I can't say I was surprised when I heard the news.  Chyna had clearly been in a very bad place for several years, having posted numerous internet videos of herself very obviously under the influence of some substance.

But once upon a time Chyna was a uniquely gifted WWF wrestler and personality, brought in as a bodyguard for Hunter Hearst Helmsley before eventually becoming the first and only female Intercontinental Champion.  I remember upon her debut, being knocked out by what an unusual choice she was for a "heater" as they call it.  Hunter was a snobby blueblood character who now needed a woman to do his fighting for him (To be fair, a woman who looked like she could beat the crap out of most of the guys).  Such a pairing had never been attempted before in wrestling; bodyguards were always large dudes, like Diesel or Mr. Hughes.  Bringing in a female bodybuilder, particularly one with such a fantastic aura about her, immediately made Hunter stand out from the pack.  While I don't doubt Triple H would still have become a big star regardless of Chyna's involvement, there's no denying the positive effect her presence had on his career from 1997-1999.

After eighteen or so months in the company Chyna finally made the foray into being an active wrestler, becoming the first woman to participate in the Royal Rumble and the King of the Ring tournament.  There was even a tease of her challenging Steve Austin for the WWF Title at SummerSlam that year, and the fact that fans didn't totally reject that idea is a testament to how believable Chyna was as an imposing figure.  True such a match would never have been a five-star classic, but an Austin-Chyna main event would certainly have garnered big mainstream attention.

In October of 1999 Chyna captured the IC Championship from Jeff Jarrett, and this groundbreaking turn of events was initially very well-received.  Chyna was hugely popular at this time and it felt like a major gender barrier had been broken down.  Here was an extremely athletic, muscular woman who had also developed a much more feminine look (thanks in no small part to some cosmetic surgery), but who carried enough credibility that we all bought her beating up a male wrestler on her way to a Championship.

2000 saw her paired with Eddie Guerrero as his girlfriend/in-ring rival, in what was a very intriguing six-month arc.  This allowed the company to explore what would happen if two active wrestlers became romantically involved.  It was something very different, and Chyna was once again crossing barriers.

Her final run in the company was in the more traditional role of Women's Champion, and due largely to the dissolvement of her relationship with Triple H and his subsequent relationship with Stephanie McMahon, she left the company shortly thereafter.  It's a shame such a pioneer so suddenly ended her connection with the industry in which she'd made such an impact.

Regardless of her choices post-WWF, Chyna will always be remembered as a trailblazing female performer in a male-dominated industry, whose influence can never be discounted.