Welcome to another round of Enuffa.com PPV Predictions!  This Sunday is New Japan's latest offering, Invasion Attack! It's been a rough year so far for NJPW, as they've lost several of their top talents, from AJ Styles to Nakamura to the Bullet Club to Kota Ibushi.  WWE has been all over their shit of late, and New Japan is finding themselves scrambling to rebuild their roster.  Kinda reminds me of the WCW vs. WWF dynamic in early 1998.  WCW had signed away quite a few talents and the WWF had to dig deep to find stars up to the challenge of carrying the company forward.  I don't doubt New Japan will fill that void, but it may be a bumpy ride on the way.  That said, this year's Invasion Attack looks like a pretty strong show despite the thinner roster.  Let's take a look....

And here's the other warm-up match, which features the comedy of Yano mixed with the MMA of Sakuraba and Nagata.  I expect this will be better than the opener but again, nothing special.  Probably just a feel-good ending. 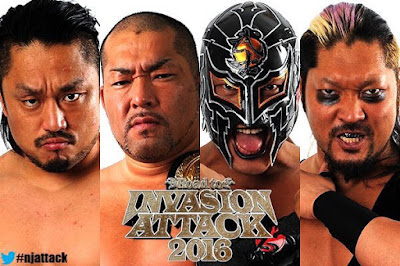 Goto recently joined the Chaos stable which will hopefully reinvigorate his career.  I like the pairing of Goto and Ishii and wouldn't mind seeing them go after the Tag belts.  The Ingobernables stable needs something and I'm not sure what.  Their antics were entertaining at the beginning but I feel like they're treading water at this point.  The problem is they won't be outdoing The Bullet Club, so as long as that faction exists any other heel stables will seem weak by comparison. 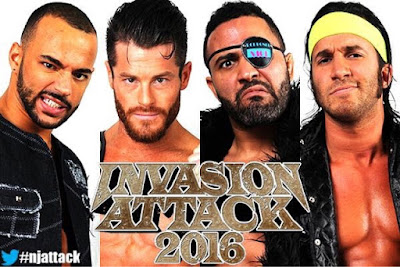 This is a tough one to pick, since WWE has apparently been courting Ricochet.  Personally I hope Ric stays in New Japan, as they can't really afford to lose more stars.  Plus I love the Sydal/Ricochet combination.  But I could see New Japan hedging their bets and taking the belts off them, just in case.  They know Romero isn't going anywhere. 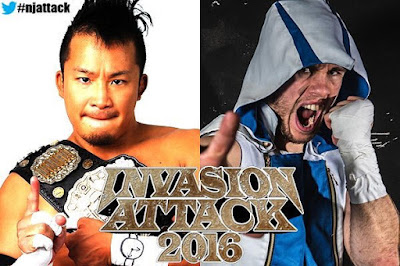 I'm really excited about this one.  I've yet to see Ospreay in the ring but I've heard great things.  Hopefully Ospreay will make his mark here and be one of the next guard of New Japan stars.  That said, Kushida's been an excellent Jr. Champ so far and I don't think it's time to take the belt off him yet. 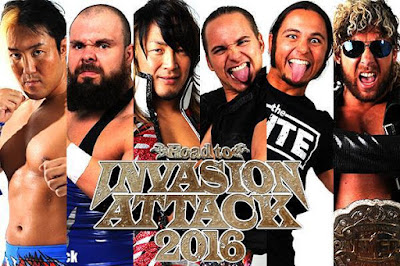 This one should be a whole lot of fun.  I love The Elite stable-within-a-stable.  Omega is a future headliner for New Japan and The Bucks should be moved up to the Heavyweight Tag division sooner rather than later (or the tag divisions should be merged).  This is a good role for Tanahashi right now since he's been working hurt for months.  Keep him in prominent matches where he doesn't have to do too much and can help groom the next group of stars.  This is also Yoshitatsu's first big match since he got hurt by that Styles Clash in 2014, and hopefully he'll get back on track.  Michael Elgin is always good for a top-notch match.

My pick: These six-man belts have been jumping around like crazy.  If I were booking I'd keep them where they are, but I could see them changing here.  I'll go with Team Tanahashi. 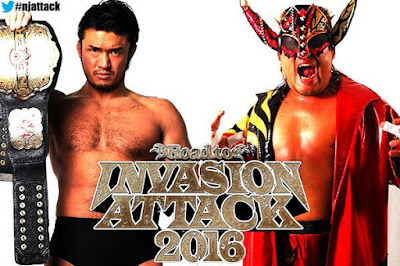 Kind of an underwhelming challenger for Shibata, as Tenzan hasn't been all that relevant in recent years.  Time to find some new NEVER guys who can work a really stiff style.  But it's a Shibata match, so it should be worth a watch and give him another win. 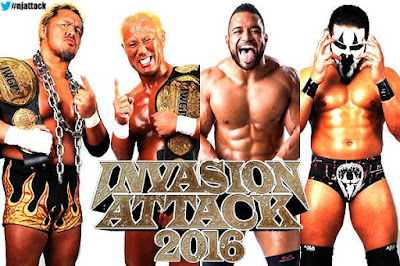 Nice to see a new team put together in the Heavyweight Tag division.  I'm not familiar with the former Camacho, so this'll be interesting to see.  Nice to see Tama Tonga getting a bigger role though.  Seems quick to put a team together and immediately give them a Title match, but with such a thin division that's kinda what they have to do.  I expect a decent brawl.

My pick: The Guerrillas score the upset win. 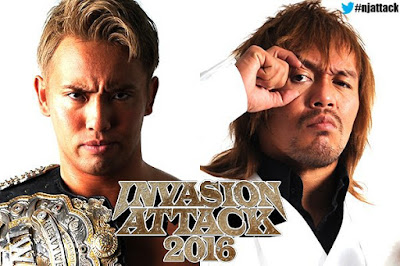 Another Title match with a challenger who isn't exactly white-hot, Okada-Naito feels like a bit of a placeholder before they set up a bigger summer feud for the Champ.  I could be wrong but I don't at all see Naito winning the belt here, since he lost multiple big matches before winning the New Japan Cup.  Still this should be a good contest.  I'm not sure who steps up to challenge Okada after this, unless they do a Title vs. Title feud with Omega.

Well that's your lineup.  Again, nothing incredible on paper but this should be a good solid show.  Meanwhile I hope New Japan finds some great talents to fast-track to prominent spots.  Jay White for example should be given the young Nakamura treatment, because that kid has it.

Thanks for reading!
Posted by Justin Enuffa Ballard at 1:06 PM