Welcome to the first of many weekly NXT reviews from our newest Enuffa.com writer Landon Wayne!

Landon is a Buffalo native with three passions in life: Food, professional wrestling and video games. He can be typically found scouring New Japan World for hidden gems, reliving old memories on the WWE Network, or playing old video games on an emulator. The ability to download a pizza still eludes him.

I have a long history with NXT. My first NXT episode was sometime in 2013, before you could find NXT anywhere except dedicated stream sites (not that I use them…). I was at their first show outside of Florida when they went to Columbus in 2015, and then again in 2016. To say I’m a fan of the brand is an understatement. That’s not to say I think all is well and fantastic in the land of the future stars, and I promise to give a fair and unbiased look at the NXT product as it comes out…at least, as unbiased as I can give it.

The opening match of the hour finds a tag match between the incumbent champions and two of the main roster’s newest stars. With the insertion of these two and the Vaudvillains in the main roster, the tag ranks in NXT have thinned considerably, much as the Women’s roster did last summer. Hopefully both American Alpha and the Revival will remain in Florida for a while to help new teams build up. 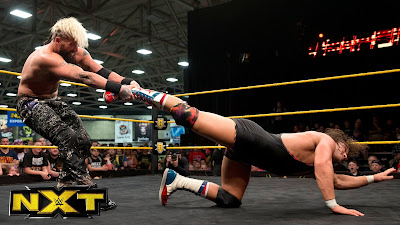 The match was interesting in that both teams are faces, and both took turns getting the heat on the other; Jason beating on Enzo, then Cass beating on Gable. This was really about as good as a match between these two could get without a turn or a proper buildup. Jason fired up twice in the process of winning, the champs eventually hitting Enzo with their assisted backdrop.

**3/4 for a solid match with nothing really botched or going wrong.


Backstage, Apollo Crews talked about how he had followed Joe even before he was wrestling, and how he was ready for him. Decent 15-second promo.

No Way Jose hype video played, and apparently he’s wrestling next. I have a bad feeling about this.

I was not disappointed. Not only is his name ACTUALLY No Way Jose, but it’s a dancing gimmick. I faintly remember this man being in a squash tag match earlier in the year, there’s no way one could forget that hair. I tried my best not to focus on the gimmick, but it found a way to be prevalent throughout the match. Can’t wait to hear Michael Cole call him "So much fun to watch!" He won a short match with some kind of heart punch(?). Not impressed but willing to give it a chance. Definitely want to see more of his opponent though. 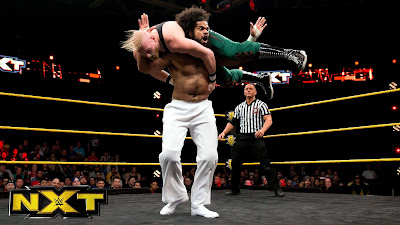 
Backstage a suit interviewed Austin Aries. Aries talked about Baron Corbin and how he doesn’t need luck, 'cause he has skill. If Corbin or anyone wants to find him, they know where to look. Still really excited for Aries to be here. I expect his rise in notoriety and popularity to be as gradual and as steady as it was in TNA when he first debuted. Wait and watch is what I say. 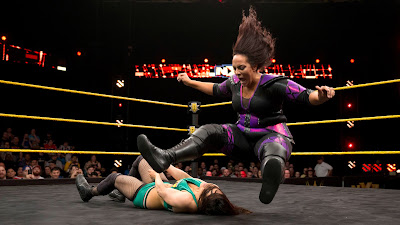 There’s no real way around it. Almost no offense from Deonna expect for a few halfhearted attempts at clotheslines. Squashes are a necessary evil in wrestling to make monster heels look good. Nia dropped the leg. Nothing to see here folks, move along.

* - Nia looks like she could kill a bitch, which was the point.


Bailey interviewed backstage, and apparently we get Eva Marie vs Asuka next week. Next week is going to be so cathartic for me. Bailey talks up both girls and assures us shell be watching.

This was a very solid match, as would be expected. It did a good job to showcase what Crews could do, while also keeping Samoa Joe in the foreground of the title picture. I’m still expecting Joe to be the one who takes the belt off Balor. Previous history in Ring of Honor and TNA has shown that Joe is an excellent defending champion, from his 500+ day ROH title reign to his multiple X Division dominations and a great TNA World title run. Can’t wait to hopefully see his defenses as NXT Champion. This match had a great accidental story of the superstar Crews against Joe the fighter. Crews cartwheeling and flipping out of situations, meanwhile Joe would sit and take punishment, until the moments he could change the momentum. Samoa Joe tapped Crews with the Coquina Clutch 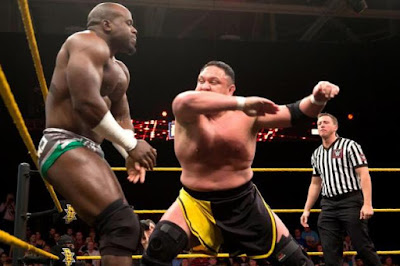 *** - a basic NXT main event with no real consequence or stakes.


This week’s NXT could be missed for the most part. Felt definitely like a cooldown from Dallas, with more important things planned for next week. If you’re feeling bored you could watch the main event.

Posted by Justin Enuffa Ballard at 11:14 AM