Writer-Director Steven Knight's Locke is a riveting 85-minute character study that takes place entirely in the front seat of a car.  There's no way a movie this constrained should work as a compelling piece of drama, but it does, completely, in a way that is urgent, honest, and feels absolutely real. 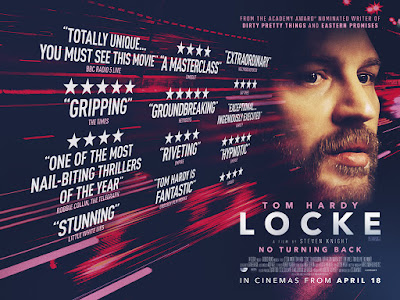 Locke stars the always spellbinding Tom Hardy as the title character, a construction foreman who's just abandoned a major cement-pouring job and confessed an extramarital affair to his wife, to be with his mistress as she gives birth to their unexpected child.  The entirety of the film deals with the consequences of this decision and we spend 85 minutes with Locke on his car ride as he juggles/manages these crises and relationships via Bluetooth.  Hardy's performance is a masterful exercise in believable restraint as he attempts to talk these various characters down from their respective ledges.  The script wisely makes Locke the paragon of composed reasoning; a lesser film would've shown us Hardy chewing the (limited) scenery and playing to the cheap seats.  Locke's adherence to logic is almost cruel at times; when his mistress asks if he loves her he replies, "How could I?  I hardly know you."

Locke's motivation for this desertion of his life's commitments is gradually made clear as he sporadically carries on a one-sided conversation with his dead father, who was absent during Locke's childhood.  He thinks he's doing the right thing, being there for this lonely woman when she needs someone most, and ensuring his newborn child doesn't grow up without a father.  In a way this is an act of supreme selflessness - "I made one mistake and I'm trying to make it right."

If it seems like I've given away too many plot points, I haven't really.  This film isn't about story progression, but about the strength of this one character and the actor bringing him to life.  Hardy is really something to behold here; despite the film literally being comprised of a series of cellphone conversations our attention never wavers.  The power of his performance and the character interactions keeps us transfixed for nearly an hour and a half.  It feels as though we're sitting in the passenger seat, living out this personal catastrophe with him.  I must also credit the vocal performances of the folks on the other end of the various phone calls, with whom Hardy conversed in real time (Evidently the entire film was shot in real time, which gives it the feel of a one-man stage play), including Sherlock's Andrew Scott as Locke's colleague Donal, Ruth Wilson as his wife Katrina, Olivia Colman as his mistress Bethan, and Ben Daniels as his boss Gareth (who appears in Locke's phone contacts as "Bastard").

Locke is a uniquely engrossing and deeply personal cinematic experience; we spend 85 minutes with this noble but flawed person at his lowest point and watch him try to make sense of it all.  This film is simple, powerful, and deals with complex real-life issues we can all identify with.