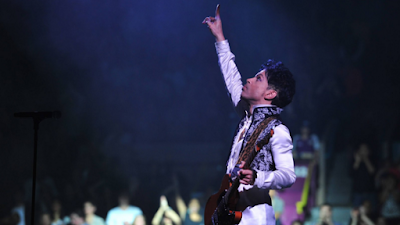 I was never much into Prince. Some of it had to do with the timing of his career vs. when I was born, but most of it had to do with the music I was into it at the different highlights of his career. I was born in 1980, which pretty much wipes out his first six albums for me because I was too young and it was before I took any interest in music. My first realization of Prince came when I was seven when he released Sign o' The Times, but at the time my interests lay solely in rock music and the burgeoning hip hop genre. Certain music has a way of introducing itself to you at certain, specific times in your life which causes you to miss other music as it's also happening.

Prince came much more into my interests when he made the Batman soundtrack and followed it up with his early '90s work Graffiti Bridge, Diamonds and Pearls, and "The Love Symbol" album. Even though my attention and focus at the time was centered around Metallica and the explosion of grunge music, it was difficult to ignore the noise Prince was making with his music, his name, and his standoff with his record label. I was captivated by Prince, but maintained a distance from his music because I wasn't sure what he and his work were all about. He was a mystery to me and, years later I realized, that was kind of the point.

There are a few artists throughout the history of popular music that I might not have been interested in, for one reason or another, but understood their greatness and genius. Pink Floyd is one of those artists. I never got into Pink Floyd, even after multiple attempts, but I knew they were great simply because I had ears and listened to how they played and how their songs were structured. Prince was that same kind of artist for me. I could enjoy his songs all day every day and some I knew the words to, but for whatever reason, I just couldn't get into Prince.

But man, did I love watching him perform! Even when the attention was centered around him writing the word "slave" on his cheeks during his battle with his label, his performances were events and they kept you on the edge of your seat, waiting for something to happen. You never knew what you were going to see when watching a Prince performance. The assless outfit he wore during his 1991 performance on the MTV VMAs is the lead example here. Then you have his 2007 Super Bowl Halftime Show, his 2008 Coachella performance when he covered Radiohead's "Creep" and, the mother of all performances, his guitar solo at the 2004 Rock n' Roll Hall of Fame Induction ceremony while performing George Harrison's "While My Guitar Gently Weeps", which should go down as one of the greatest solos in the history of pop music (Dhani Harrison's smile during Prince's solo is everything!).

Prince was a visionary, an innovator, and a flat out musical genius and activist. He stood up for control of his work and advised younger artists getting into the business to be careful of the industry's sly tactics. He secretly gave money to the family of Trayvon Martin and was deeply concerned about human rights. Some people, myself included, didn't quite know what to make of Prince and his music because he was ahead of his time. He knew how to be one step ahead while still maintaining relevance in the present.

What was the greatest thing about Prince? His sense of humor. Yeah, he had a sense of humor! Dave Chappelle's famous re-enactment in "Charlie Murphy's True Hollywood Stories" depicted Prince in such a comical way that even the man himself was a fan of the bit. Remember the cover of his single "Breakfast Can Wait" that made the world drop to it's knees, doubled over with laughter? How about his appearance on the television show The New Girl, when he asked Jess if she liked pancakes? Dude, I died.

It was all Prince. He embodied the unexpected, hit you with the punchline without even telling you the joke. He moved and lived in his way. He was creating sounds in his music that were untouchable and unattainable to anyone else. During this time while mourning the loss of this truly great musical icon and legend, I can take solace in knowing that I didn't miss recognizing a legend while he was still here with us, even though I missed the boat on being a Prince fan. Again, some music enters your life at certain, specific times causing you to miss other music. Thankfully, Prince's music is different. It doesn't wait on you. It sticks around forever waiting on you to enter its life.

Rest in peace legend. You will forever be missed.
Posted by Justin Enuffa Ballard at 9:09 AM