Black Trunks, Black Boots: The Appeal and the Success of the NJPW Young Lions 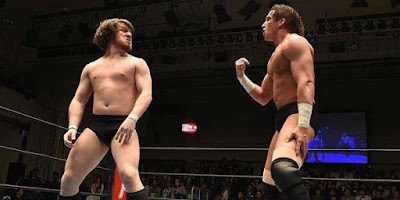 When you think of Japanese pro wrestling, New Japan in particular, what comes to mind? Well, there’s the Ace, Hiroshi Tanahashi whom many credit with bringing New Japan into the prominence and success the company enjoys today. Or you could turn to a star of the past, like Yuji Nagata, the Blue Justice who once held the record for most title defenses of the IWGP Heavyweight Championship, in a reign that spanned over a year. Maybe you think of the NEVER Openweight Title, and the current holder Katsuyori Shibata, who demonstrates the puroresu old ways with merciless strikes and submissions. I could go on, but the keen reader would have noticed the unifying thread that connects the above men. All of them were at one point young boys in New Japan, or Young Lions as they’ve become known. Many, including myself, can and do argue that their success and popularity can be directly correlated to their tenures as the extras of the company.

So, what’s a Young Lion? For the uninformed or out of the loop, Young Lions are the men who started training at, or had a little training before going to, the New Japan Dojo. They’re the men you see taking entrance gear and titles from their owners before matches start, helping wrestlers to the back after matches should they need assistance, and they’re typically in opening matches taking the deciding fall in tag matches or singles matches. These are all simply at-event or on-camera duties, as they have other tasks from sunrise to sunset, as WWE wrestler Finn Balor has attested.

“I was [24 and] a full young boy, so I’d be woken up at 7:30, clean the toilets, clean the ring, sweep outside the streets...You basically run all the errands for the older wrestlers, it’s almost like a hazing.”

The difference between the Young Lions and WWE’s enhancement talent is that the Young Lions will eventually make something of themselves in New Japan. In each match, they get progressively more and more offense and time. While they are jobbers, they are typically made to look good in their matches. Each wrestler is able to build a repertoire of moves in their efforts against the established wrestlers of the company. Along with their moveset is built a personality that they can carry throughout their time with the company. But the most important aspect of these matches are the chemistry they build with the established wrestlers inside the ring, serving them later when it comes time to be in more competitive and longer matches. But chemistry is also established with the fans, the men and women getting to see the future and find their new favorites. In WWE [and I promise I’m not turning this into a WWE rant] men like Zack Ryder and Jack Swagger are brought in to make their opponents look good, but that’s about it. You never see a focus on the talent or personality of the losing party. Men come to the main roster hot and either stay hot or cool off perpetually, a pyramid scheme that requires fresh faces to be slingshotted regularly. Meanwhile, Tanahashis and Shibatas can be on top much longer because their fan base is comprised of much fewer bandwagoners and more career-long fans. Because they remember when Hiroshi wore those black trunks "and dammit, I’ve been with him all the way and I’m not abandoning ship now."


The best example of this happened on the 23rd when David Finlay and Jay White fought the Great Bash Heels (GBH) during the Road to Dontaku tour. In the stands, you could see banners for Jay and for “King of the Uppercut” David. During the match, Jay and Dave got cheers from the crowd. Jay got mouthy with Makabe (mistake for him) and David would proceed to uppercut the hell out of Honma at several points in the match. These men are, in my opinion, going to be major gaijin in New Japan in the next 5 years, and the exposure and time as Young Lions is definitely helping in that endeavor.

Best of the Super Juniors is coming up starting next month, with New Japan and foreign wrestlers getting the spotlight for a month of shows. I look forward to the future IWGP Junior Heavyweight champion Jay White and future NEVER Openweight champion David Finlay participating. Who knows, they may even get a few points during the whole thing. Even if they don’t, I know one day they will. And on that day, I’ll be able to tell everyone “Yeah, I told you so.”