Weezer is a band that, time and again, I’ve placed high hopes and expectations on in an effort to convince myself they are a really great rock band, not just a pretty good rock band that hit it out of the park on their first two albums (“The Blue Album” and Pinkerton) and mediocrity the rest of the way. So, after being let down time and again, album after album, one could make the argument that my disappointment is self-inflicted. Maybe Weezer doesn’t want to be what I want them to be? With the release of their new self titled album, “The White Album”, it’s become clear to me that one should not expect much from Weezer, just repetition.

When listening to their latest self-titled effort, I found it be catchy, fun and melodic, almost in an ode to The Beach Boys and Brian Wilson. Each song made me tap my foot, bob my head and caused me to picture blaring this album on my car stereo in the summer with the windows down. Rivers Cuomo is known for his catchy melodies that stick in your mind, even on Weezer’s shittiest of albums. Overall, “The White Album” is a good rock/pop album and comes from a band that seems to still enjoy playing together. They sound tight and together. 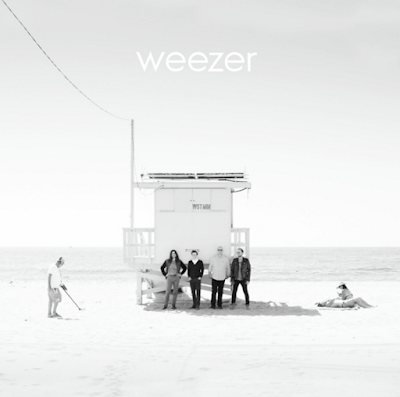 This album could be a pseudo-concept album centered around the beach and California but more so on summer with Rivers going through all his experiences during the season, with the excitement and romances, the fantasies and the drugs, only to be let down at the end by declaring it an “Endless Bummer”. As inspiration for this album he used the dating app Tinder to meet different girls and learn about them and what they want,presumably, out of him. He took in his California surroundings and created stories and characters from them. He wrapped it all together into a catchy, weird teenage awkwardness. “Summer Elaine and Drunk Dori” sounded like the closest callback to “The Blue Album” I’ve heard from the band. The beginning of “(Girl We Got A) Good Thing” sounds like a Beach Boys song so much that if it wasn’t for Rivers’ straining to reach the high notes later in the song I might not have been able to tell the difference. The closing two songs on this album are fantastic. “Jacked Up” sounds like a complete departure from the Weezer sound that I immediately dismissed the annoying high pitched “I’m all jacked up over you/I’d bury diamonds just for you”. The song also has my favorite line on the album “Why why why do my flowers always die?” A very provocative and introspective lyric that I love, especially coming from Rivers. The closer “Endless Bummer” is a great acoustic song that seemed to sum up the summer of experiences of love and heartache, into a declaration of mediocrity. The stripped-away strumming of his guitar is striking and the slow buildup of the rest of the band coming into the song is one of the best musical moments on the album.

The highlight for me is the single “King of the World”, the rare song in which Rivers lets us see him for exactly who he is, a considerate, sensitive man who really loves his wife. He really wants to create a better world for his wife so she doesn’t have be scared, sad or anxious about all the bad stuff that the world can cause. It’s a song with subject matter that I think Rivers hasn’t given us before. I really appreciated that song.

Combine all this with producer Jack Sinclair’s love and devotion to Weezer’s early work and you have an album that is right out of the 90s. This album does sound like Weezer of “The Blue Album” period and there are even a couple of songs that could’ve been leftovers from Pinkerton. However, I can’t shake the feeling that that isn’t a good thing.


The problem with Weezer is everyone’s response to Weezer’s new albums, including this one. With every Weezer release comes the same old proclamations of how it’s the band’s return to form, and it has the heart and charm of their early work, and how it’s the band recapturing the sound of “The Blue Album” and Pinkerton. Critics, journalists and fans themselves have made these proclamations even with the band’s shittiest of efforts Make Believe and Raditude. It's gotten to the point where I get excited about the reviews and about the album on first listen, only to be let down soon enough that it’s not what we all thought it to be. We all want it to be like their early work so much that we’re overlooking the fact that it just might be their early work, that it’s nothing new. In short, Weezer has been putting out the same album since "The Green Album."

“The White Album” is a really good sounding record but it hits upon the same old things we’ve all come to expect out of a Weezer album: heavy pop hooks, a guitar solo here and there, self-deprecating, anxiety laden, high vocal pitches and, it’s about girls. Thanks Weezer, as if I haven’t heard that album before.

The excitement for a new Weezer album gets fans so nostalgic for ‘90s reclamation of glory upon its release that they don’t seem to realize two weeks later that they’ve forgotten about it. For me at least, that’s what happened two years ago when they released Everything Will Be Alright. On the first few listens I really enjoyed it, even chiming in along with everyone else that Weezer has found its stride again. Then, after taking a break from it, went back to listen to it again only to find it stale and unexciting. The new album sounds like it also won’t age well. Why? Because it’s the same old album.

So the question I ask music journalists, critics and fans is the same one I asked myself: Why do you want Weezer to sound like the band on “The Blue Album” or Pinkerton? If I want to listen to an album that sounds like those two albums, I’ll just listen to those two albums. It’s as if the expectations for Weezer have unknowingly gotten so low that we give them free passes for giving us the same album over and over again. The only slight turn they’ve taken on this new album is the song “Jacked Up” with a piano anchoring the song. That song sounds NOTHING like Weezer and is one of the highlights for me on the album because of it’s unexpected style. So instead of looking for Weezer to give us another “Blue Album” why not look for them to give us something new and different?

Now, none of what I write here is to suggest Weezer sucks and they haven’t given us decent to good albums, because they have. I really enjoyed “The Green Album” and to some extent Maladroit. I’ve heard a lot over the years, and heard it again recently, that “The Red Album” was one of Weezer’s best in a long time because it sounds NOTHING like their previous albums. In fact, “The Red Album” is such a different album that I forgot about it - I’ve associated the band’s sound with every other album that "something different" seems to slip through my memory. Its also a one-and-done type album, almost saying “Here’s something new! Now back to your regularly scheduled Weezer programming.” The album is actually the only one to have all four members contributing lead vocals and the songwriting. They mixed it up and it worked, why go away from it!?!?!?! “The Red Album” had sharper guitar riffs, a heavier sound, experimentation and much meatier lyrics while still keeping the band’s pop/rock sensibilities. It was the most concise the band had sounded to that point and how do they follow it up? With fucking Raditude.

As much credit and appreciation I can give the band for “The Red Album”, it’s still 8 years old and four albums ago. To suggest it was just a lucky blip on the Weezer radar screen would be fitting and to expecting them to make another album as good as that would be expecting too much.

So, what am I trying to say with all this mess of a review/rant? Their new album is good but nothing really new. Even saying it’s good might be a stretch. We’ll see how it sounds in a month. Also, my expectations for Weezer are that they’ll continue to give me the same album with every release. I just can’t trust Weezer to give me anything more than that. Also, people need to let their first two albums go and treasure them. They were fantastic albums and always will always, but wanting the band to reclaim that sound and artistry, or to make albums like those, is to want the band to remain complacent, and a complacent band is a boring one. In the end I wish Weezer would stop being boring.
Posted by Justin Enuffa Ballard at 8:51 AM