Welcome to Part 2 of our Ultimate Dream WrestleMania!  Night 1 has already been heralded as an all-time classic PPV (I believe Dave Meltzer gave both Flair vs. Bryan and Savage vs. Punk five stars), and we're only halfway through the festivities.  Strap yourselves in and enjoy the second half! 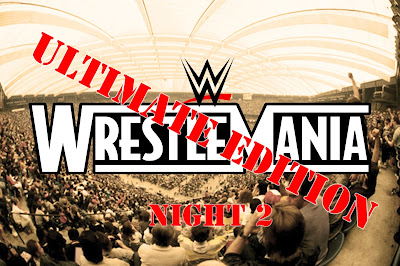 Edge & Christian vs. The Midnight Express 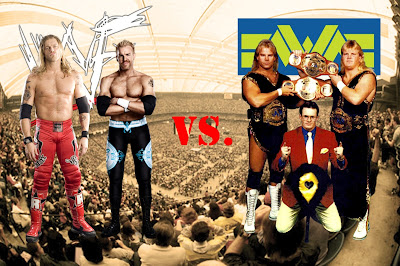 We open with a blazing tag team matchup, as Jim Cornette's legendary Midnight Express takes on the team that "reeks of awesomeness."  This is your classic seesaw matchup, as neither team is able to maintain an advantage for very long.  The tandem offense is plentiful and dizzying, and the referee has trouble keeping just two men in at a time.  Halfway through, the Midnights exploit a distraction allowing Cornette to wallop Christian with his tennis racket, and they take control.  After several minutes of abuse, Christian tags Edge and all hell breaks loose, with all four men in the ring at once.  At the fourteen-minute mark the Midnights set Christian up for the Veg-O-Matic, but Edge pushes Bobby Eaton off the top rope and nails the Implant DDT on Stan Lane for the win. 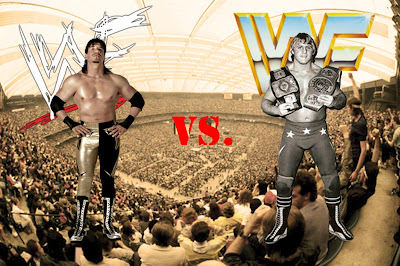 Two of the most beloved heels in wrestling history face off next, in a bout likely to be rife with cheating.  Hair-pulling, tights-hooking, rope-holding, it's all there.  Eddie sets a fast pace early on but Owen eventually slows it down to gain an advantage.  After eleven minutes Owen accidentally knocks down the official, Eddie grabs a chair and tosses it to Owen, and feigns being hit.  The referee questions Owen about using the chair and Eddie rolls him up for a close two-count.  Owen kicks out and snares an airtight small package for the three. 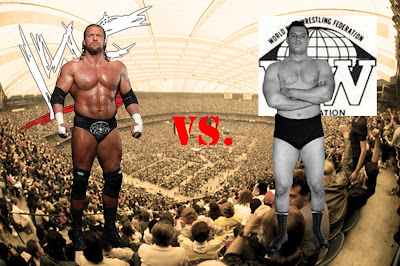 It's Mentor vs. Student as the monstrous Killer Kowalski faces his greatest protege, Triple H.  This match would be a contrast of styles as Kowalski tries to brawl while Hunter isolates a leg to negate his size disadvantage.  In the closing minutes Kowalski catches Hunter with the dreaded claw hold and nearly gets a submission before Hunter lurches for the ropes.  The referee pushes Kowalski away but he charges at Hunter, who catches him with a Harley Race high knee, followed by the Pedigree for the win at 8:40. 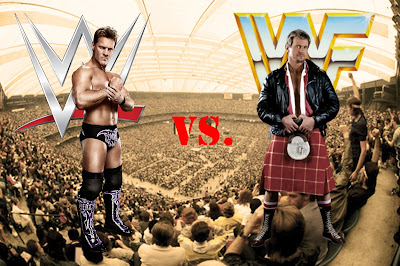 Note: I mentioned earlier that there was one partial exception to the "dream match" rule, and this is it.  Technically we did see Chris Jericho and Roddy Piper fight each other at WrestleMania 25, but it was part of a 3-on-1 handicap match and it was terrible.  Piper was 55 years old and in no way resembled the accomplished in-ring talent he once was.  So that one doesn't count.

The verbal battles between these two legendary mouths would damn near upstage the match itself.  We'd see some primo roasting sessions in the weeks leading up.  As for the match, Jericho would hit and run, keeping his distance and using flashy aerial moves, while Piper attempted to get in close and unleash a barrage of fists.  The mind games would be front and center, as both men goad the other into making a mistake.  After thirteen unruly minutes Piper snares a sleeper hold, Jericho pushes off the turnbuckles and gets a near-fall, Piper pulls Jericho to his feet, and Jericho surprises him with a lightning-quick Codebreaker for the duke. 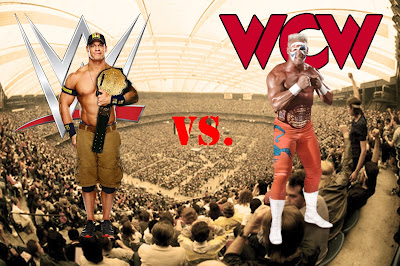 Both of these men managed to become top-notch in-ring workers despite not being marketed as such, and both would utilize their freakish strength and explosive offense to wage a highly exciting battle.  Sting's speed would keep Cena off-balance early on, but Cena's superior power would keep the match very even.  At the fifteen-minute mark Cena powers out of a Scorpion Deathlock and reverses into an STF.  Sting breaks free, kicks Cena into the ropes, bounces off the other side, and leaps straight into Cena's arms for a match-ending Attitude Adjustment.

Handicap Match: The Road Warriors vs. The Shield 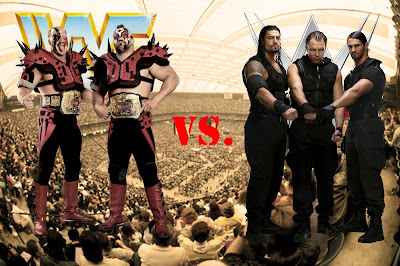 Two of the most dominant teams in the history of the business, The Road Warriors and The Shield would start the match with an absolute melee, pounding the crap out of each other.  Eventually the referee would restore order, and The Shield would need to combat Hawk & Animal's superior power by using the third man advantage.  The "Hounds of Justice" would isolate and wear down Hawk for several minutes until finally he made the much-needed tag to Animal, who would plow through all three Shield members.  At the twelve-minute mark LOD hits the Doomsday Device on Dean Ambrose, but Rollins and Reigns break up the pin, toss Hawk out of the ring, and Rollins goes for the Curb Stomp, flies into the air as Animal stands up, and Animal catches him and press-slams him to the mat just before eating a Reigns spear for the pin.

The Rock vs. Shawn Michaels 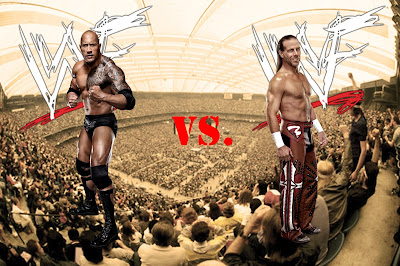 This battle between two of the greatest showmen in wrestling history would have an impossibly fast pace, as Rock's brawling would meet Shawn's unmatched agility.  Shawn would utilize the ropes often, hammering The Rock with flying clotheslines and dropkicks, while The Rock would pummel Shawn with right hands, DDTs and Samoan drops.  Shawn's resiliency would frustrate The Rock throughout, as he kicks out of two Rock Bottoms and a People's Elbow.  Rock meanwhile withstands a superkick when Shawn is unable to immediately cover him.  At the twenty-one minute mark Shawn hits a top-rope elbow and "tunes up the band" for another Sweet Chin Music.  Rock catches Shawn's foot, spins him around, goes for a Rock Bottom, Shawn fights out of it, Rock shoves him into the ropes, and Shawn bounces back, directly into the third Rock Bottom of the match.  1-2-3. 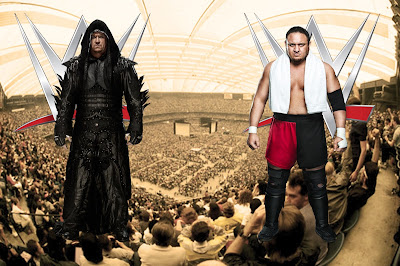 This battle of dominant strikers would be methodical and brutal.  Despite giving up nearly a foot in height, Joe would be unintimidated, standing toe-to-toe with The Deadman and trading devastating jabs before focusing on Taker's legs.  Joe would break out every submission hold in his arsenal - the modified crab, the crossface, the Rings of Saturn.  Taker would fight through all of it, smashing Joe with a Last Ride for a near-fall.  At eighteen minutes Joe squirms out of a Tombstone attempt and locks in the Coquina Clutch, but Taker stays vertical and backs into the turnbuckle.  Joe releases the hold, finds his footing, and leaps off the second rope, but Taker catches him and spikes him into the canvas with a Tombstone for the pin. 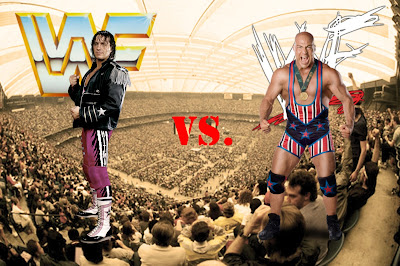 If ever a match qualified as the old "game of human chess," this would be it.  Hart and Angle are two of the greatest technical wizards of all time, and the chain wrestling on display here would be nothing short of genius.  The first five minutes or so would be comprised of classic mat grappling, with Angle getting a slight advantage due to his Olympic background.  Bret would hold his own though, and eventually take control by working a body part, weakening Angle's lower half and working toward the Sharpshooter.  After nearly 25 minutes of stupendously intricate reversals and near-submissions, Angle catches Bret in the anklelock, Bret rolls over and kicks him off but grabs both legs as he falls, and locks in the Sharpshooter.  Angle pulls one of Bret's feet free and gets the anklelock again, and both men maintain their submission holds, each trying to make the other tap first.  Finally both men let go, Angle springs to his feet, and Bret takes him down with a crossface.  Angle tries to wriggle free but Bret holds on with a vice-like grip.  Angle finally taps just before passing out. 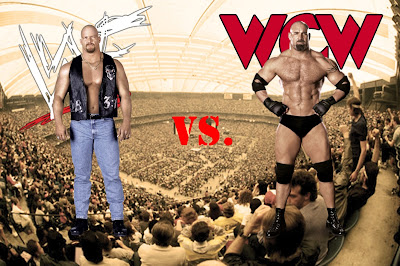 Arguably two of the three most popular stars of wrestling's most successful era, Steve Austin and Bill Goldberg only missed being active members of the WWE roster by one day, and thus we never got to see this monumental clash.  But here it is, the main event of this two-day extravaganza.

Austin and Goldberg trade punches and kicks for the first few minutes until Goldberg lays Austin out with a brutal throw.  Austin rolls to his feet and nails a Thesz Press.  Goldberg pushes him off and hits a press-slam into a powerslam for a two-count.  Austin takes several minutes of Goldberg's power offense before dodging a spear attempt and folding Goldberg's leg with a chopblock.  Austin stomps the knee and locks in a Texas Cloverleaf.  Goldberg uses his incredible strength to push Austin off, and Austin turns around right into a brutal spear.  Goldberg lifts Austin high for the Jackhammer, but Austin twists around and lands behind him.  Goldberg spins, Austin kicks him in the gut and grabs his head for a Stunner, Goldberg pushes him into the turnbuckle and charges.  Austin sidesteps, Goldberg hits the corner and bounces back toward Austin.  Kick to gut, Stone Cold Stunner, game, set, match.  Austin wins after fifteen minutes.


And there's your second night of this monumental dream WrestleMania!  I hope you enjoyed this hypothetical PPV.  Thanks for reading!  Comment below with your thoughts!