RAW After King of the Ring

Vince comes out and says that after watching Kurt Angle beat his son to within an inch of his life at King of the Ring, he's come to realize how important it is to protect what he holds dear.  That means both his family and the company he built.  Since the end of March, the WWF has been under attack, and he's watched his employees suffer repeatedly at the hands of a bunch of lawless hooligans.  But when he watched his son Shane take the worst beating of his life to protect the family business, that lit a fire under him, and now the line is drawn in the sand.  The WWF will not stand for this any longer.  "Eric Bischoff, you want a war?  In four weeks there will be a WWF PPV event, and if you and your band of pirates have the cojones to show up, you'll get a war!  We'll call the event....INVASION!!"

It's announced that Chris Benoit suffered an injury during the Triple Threat match and its aftermath, and will be out indefinitely (real-life neck injury), but Chris Jericho has asked for a one-on-one Title match with Steve Austin tonight!

Undertaker and Kane will enact their Tag Title rematch clause next week against The Dudley Boyz, after Sting appeared and cost them the belts.

Edge has a coronation segment after winning the King of the Ring tournament, and Christian shows signs of jealousy, teasing a breakup.

Austin vs. Jericho is the main event.  The two have an excellent 15-minute match free of interference, and Austin counters a Lionsault and hits the Stunner to retain.  As he's celebrating, Bischoff appears on the Titantron.  "Congrats on another win Steve.  Tell your boss Vince that I accept his challenge at Invasion.  Whaddya say we each put together a five-man team for the main event of that show?  You pick your four best WWF pals, and I'll assemble my WCW contingent.  Let's see, we have WCW Champion Booker T, Goldberg, Ric Flair, Sting......I guess that leaves one spot open.  I wonder if we can find one more guy....."  Bischoff says to someone off-screen, "What do you think?"  The camera pans over and it's Hollywood Hulk Hogan!  "Uncle Eric, I think I'm wide open on July 22nd.  I will see you at Invasion!" 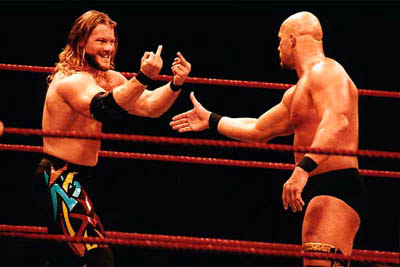 The announcers go bananas as RAW goes off the air.

Vince announces the members of Team WWF at Invasion.  It will be the WWF Champion Steve Austin leading the team of Triple H, Kurt Angle, Chris Jericho, and The Big Show!
In the main event Taker and Kane get their rematch against The Dudley Boyz.  Late in the match, Taker & Kane are about to regain the belts, when DDP and Kanyon show up and attack them, drawing a disqualification.  Page hits both brothers with chair shots until the Dudleys regain their feet and step in front of Taker and Kane to shield them.  As Taker and Kane stand up, the Dudleys spin around and all four men attack Taker and Kane.  JR yells, "What is happening?  What are the Dudleys doing??"  Taker and Kane continue to fight them off, but Rhyno, Taz and Raven run down to the ring.  All three pause for a moment before joining the Dudleys in the attack.  Suddenly a new piece of ring music hits...."ONE OF A KIND!"  Rob Van Dam emerges from the entrance ramp.  "My God that's....that's Rob Van Dam!"  Suddenly Paul Heyman gets up from the announce table and says "Excuse me, JR."  He takes a live mic and goes into the ring.  "Ladies and gentlemen, my name is Paul Heyman, and I am a WWF broadcaster.  I like this job.  I like calling the action every week with my respected colleague Jim Ross.  But as much fun as this job is, I don't love it nearly as much as I loved my old job.  My old job was running a wrestling company called E...C...W!  And with these six men you see before you, plus a host of others, we changed the very face of this business!  Now, Vince McMahon has certainly had his hands full the past few months with members of WCW attacking his talent every week, but WCW isn't the only company Vince McMahon ruined, and thus, Eric Bischoff isn't his only enemy.  My company, ECW, was also a victim of Vince's out-of-control ego and predatory business practices!  Eric Bischoff and I have been doing a lot of talking, and we see eye-to-eye on how to deal with your sports-entertainment juggernaut.  So guess what Vince, at Invasion, your war is now two-fold!  Bischoff's WCW is henceforth forming an Alliance with Paul Heyman's ECW!" 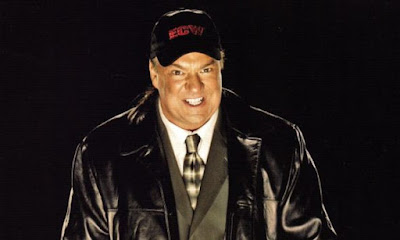 The ECW contingent and DDP and Kanyon all exit through the crowd as RAW goes off the air.

Over the next two weeks the rest of the Invasion card falls into place.  Rhyno, a WWF-contracted wrestler, loses the Hardcore Title to Spike Dudley, who is then attacked backstage by the ECW squad, which now includes Tommy Dreamer.  Rob Van Dam drags a referee into the room and pins Spike to capture the Hardcore Title.  He then says into the camera, "I hear the WWF has a daredevil by the name of Jeff Hardy.  Well Jeff, no one can touch RVD when it comes to taking risks.  Now that you have a championship and I have a championship, how 'bout at Invasion we put 'em both up in a Hardcore match, and we'll find out who is The Whole Dam Show?"

The Undertaker and Kane will finally face Diamond Dallas Page and Kanyon.

The final card is:

The European Title match opens the show, and after 12 minutes of strong action, Lance Storm dethrones Matt Hardy.  Next up the ECW six-man team makes short work of Regal's team in just under six minutes.  Edge & Christian have a solid ten-minute effort against Palumbo & O'Haire, capturing the WCW Tag Team Title.  Christian is over the moon, while Edge's reaction is tempered.  X-Pac defeats Billy Kidman in a high energy 8-minute battle.  The Dudley Boyz retain the WWF Tag belts over APA in nine minutes with help from Tommy Dreamer's interference.  Undertaker and Kane have a wild fifteen-minute brawl with DDP and Kanyon that ends with the Brothers of Destruction both hitting Tombstone piledrivers for the pin.

Jeff Hardy and Rob Van Dam have the exact show-stealing Hardcore match they did in real life, and RVD hits the Five-Star Frog Splash to unify the Intercontinental and Hardcore Titles.

The main event is an epic 25-minute war with almost non-stop action.  All ten men get ample time in the ring and we see some amazing first-time pairings.  Austin and Goldberg trade finishers, but both subsequent pin attempts get broken up.  At the end of the match all hell breaks loose and all ten men are brawling around the ring.  Austin and Hogan are in the ring alone, but while the referee's back is turned Flair slides in, whacks Austin with a chair, and Austin stumbles into a big boot from Hogan, followed by a legdrop for the pin.  Team WCW wins the first major battle and Bischoff runs to the ring to celebrate as the show goes off the air. 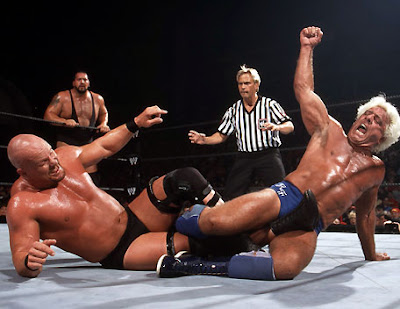