RAW begins with Eric Bischoff, Paul Heyman and the entire Alliance in the ring.  Bischoff gloats about winning the first battle at Invasion.  Rob Van Dam now holds both the Intercontinental and Hardcore Championships, and henceforth the Hardcore Title is no more.  "The Hardcore Title is for glorified stunt men like Mick Foley, not accomplished athletes like Rob Van Dam!"  Lance Storm captured the European Title from Matt Hardy, and The Dudley Boyz retained the WWF Tag Titles, meaning The Alliance now controls every WWF Championship but one.  "And the man who holds that Title, Steve Austin, got pinned in the middle of this ring by our fearless leader, The Immortal Hollywood Hogan!"  Hogan steps forward and laughs arrogantly before hugging Bischoff.  Hogan takes the mic and cuts a promo on Austin, saying Austin and his pathetic Team WWF couldn't get the job done and Team WCW made short work of those losers.  "As I recall there's a big PPV coming up in August called SummerSlam - just one of many WWF PPVs the Hulkster built.  Austin if you have any guts at all you'll give Hollywood Hogan a shot at that piece of tin on your shoulder, and I'll show you what a real WWF Champion looks like!"

The show goes to commercial just after JR announces that Vince McMahon and the WWF roster has not yet arrived in the building and he doesn't know what's been planned for tonight's show.

After the break, Heyman has returned to the announce table while Bischoff is still in the ring, with the Alliance surrounding it on the outside.  "Since Mr. McMahon and his band of losers still hasn't shown up to this arena, the WCW/ECW Alliance will be running RAW tonight.  And since The Alliance loves beating up losers, you're about to see a few of our guys tune up by squashing a handful of nobodies we found at the local bingo hall.  First up is your brand new European Champion, Lance Storm!" 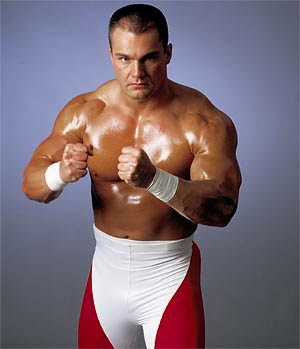 Storm makes short work of a local jobber, submitting him with the single-leg Boston crab in just under two minutes.

"Wow, what an amazing athlete Lance is!  We are blessed to have him on the WCW roster!  Okay, next up it's one of the premier tag teams in wrestling today, Diamond Dallas Page and Kanyon!"

"I know, it's incredible to watch DDP and Kanyon work, isn't it?  You're lookin' at the next WCW Tag Champs right here.  Anyway, you all might wanna sit down for this one.  Right now you're gonna be treated to a rare free television match from the premier Champion in this business today, the five-time WCW Champion, Booker T!!!!"

Booker begins squashing a jobber when a handheld camera shot appears over the Titantron.  JR and Heyman are in disbelief as a familiar voice bellows over the PA system.  "Booker T!  Oh Booker T?  Before you finish beating up on that jabroni I though you'd like to get a look at your opponent for SummerSlam.  Four weeks from now you'll be putting the WCW Title on the line against...." the camera pans over and it's The Rock! "...the trailblazing, eyebrow raising, jabroni-beatin', pie-eatin', best in the present, future and past, and if ya don't like it, YOU CAN KISS THE ROCK'S ASS!!"  The crowd erupts as Booker watches the Titantron in a state of shock.  The jobber comes up behind Booker and rolls him up for a three count, and Booker loses it, nailing the jobber with three axe kicks.  Suddenly the WWF roster storms the ring and the two rosters get into a wild brawl.  JR says, "My God, this is utter chaos!  Don't go anywhere, Monday Night Raw will be right back!" 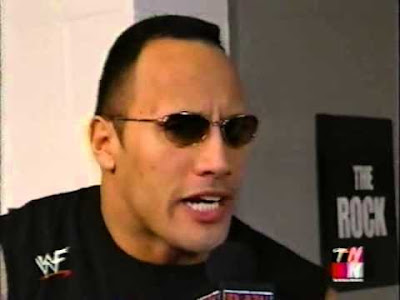 Back from break, security has separated the two camps and is escorting the Alliance backstage.  Vince is in the ring with a mic.  "Bischoff, you son of a bitch!  You may have won the first battle, but at SummerSlam The Alliance will be destroyed once and for all!  Stone Cold Steve Austin WILL face Hollywood Hogan for the WWF Title, and Booker T will defend the WCW Title against The Rock!  And believe me, The Rock absolutely cannot wait to lay the smackdown on that rotten bastard!  As for you Heyman, if you do anything besides sit at that desk and call the matches I'll personally beat a rain check into your ass!"  Heyman pleads, "I didn't do anything!"

"If the Alliance wants to play in the big leagues, fine.  Tonight you're gonna see members of The Alliance in action, starting with the guys who just got warmed up.  Lance Storm will defend the European Title against Jeff Hardy, while DDP and Kanyon face the APA!  Later in tonight's main event, Booker T will compete in a non-title match, against the Olympic gold medalist, Kurt Angle!!"

Storm just barely escapes his match with Jeff, countering a Twist of Fate with a schoolboy while hooking Jeff's pants.  The APA defeat DDP & Kanyon after about ten minutes of wild back-and-forth action.  Angle vs. Booker is an excellent main event, wherein Angle snares the ankle lock but Paul Heyman throws his drink into the ring from the announcers' table.  The drink hits Angle in the back, Angle turns around and JR points to Heyman.  "Heyman threw the drink Kurt!"  Heyman replies, "I did nothing, some fan behind me threw it!"  Booker takes advantage of the referee being distracted and hits a low blow on Angle, then finishes him with the axe kick.  After the match Vince runs out, yanks Heyman out of his chair, and throws him to the ground, then pummels him with fists.  Bischoff and the Alliance run out to save Heyman and the WWF locker room follows, ending the show in a massive brawl.

On the next few RAWs and Smackdowns we get more matches between WWF and Alliance midcarders.  Mike Awesome has a solid match with Kane, Taz and Tajiri have an excellent match, Jindrak and O'Haire reunite to face the Hardy Boyz in a thrilling tag bout.  In all three cases the Alliance members win.

The next RAW episode ends with an Undertaker-Rob Van Dam match for the Intercontinental Title.  Taker counters a Five-Star Frog Splash and goes for the Last Ride, and the lights go out.  Sting suddenly appears and thrashes Taker with the baseball bat, drawing a DQ.  The two brawl into the crowd to close the show. 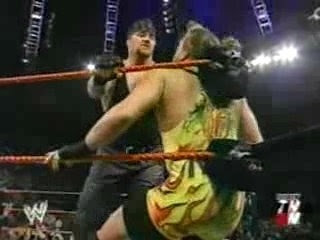 The following week on Smackdown Triple H is booked to face his hero Ric Flair.  The two have an excellent old-school match and Triple H nails the Pedigree for the win after 17 minutes.  Suddenly he turns around and is laid out by a Goldberg spear. 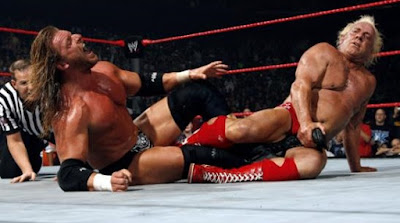 Both Sting vs. Undertaker and Triple H vs. Goldberg are announced for SummerSlam.  Also the WWF and WCW Tag Titles will be unified as The Dudleyz face Edge & Christian.

The go-home show is headlined by a six-man tag: Austin/Triple H/Taker vs. Hogan/Goldberg/Sting.  It's another tremendous multi-man match, and Austin hits the Stunner on Hogan for the win, but both locker rooms empty and we close with another pull-apart brawl.

The final card for the summer spectacular is:

Storm and Jericho have an excellent opening clinic which sees Jericho use the Liontamer, only for Storm to wriggle free and counter with the single-leg crab.  Jericho kicks Storm off and rolls him up for a small package, but Storm shifts his weight and holds the rope for the three-count at 10:22 to retain.

Angle and Flair have a ground-based technical match where Angle dominates the early minutes, Flair uses eye pokes and low blows to get an advantage and control the middle, and Angle comes back toward the end.  Angle escapes the Figure Four and applies the ankle lock, Flair kicks him off, Angle charges but slides through Flair's legs and hits the Angle Slam for the pin at 12 minutes.

The Dudleyz and Edge & Christian have a fast-paced battle, and after 8 minutes Edge goes for a spear on Bubba, who throws Christian in front of him.  Edge levels Christian by accident, the Dudleyz toss him over the ropes, and Bubba pins Christian to unify the tag belts.  After the match Christian is furious and kicks Edge in the gut before delivering the Unprettier.  He leaves Edge laying in the ring.

Taker vs. Sting is a methodical but effective brawl that ends after 14 minutes with Sting countering a Tombstone into a Scorpion Death Drop for the win.  After the match Sting assaults Taker with the baseball bat and a host of Sting lookalikes carry Taker to the back.

Rob Van Dam and Jeff Hardy have more or less the match they actually had, going a blistering 15 minutes and ending with RVD landing the Frog Splash from the top of a ladder before climbing up and retrieving the IC belt. 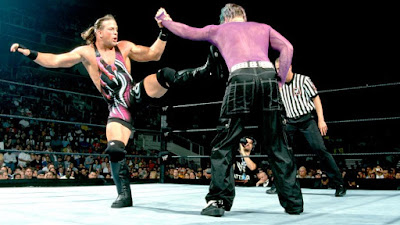 Triple H and Goldberg have a basic but compelling 12-minute match, similar to Goldberg vs. DDP in 1998.  Hunter counters much of Goldberg's offense but Goldberg's power is too much and he powers out of a Pedigree attempt, hits a short-arm clothesline, followed by the spear/jackhammer combo. 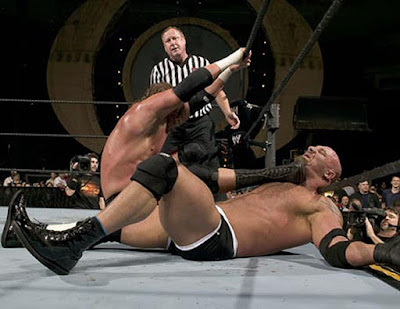 The Rock's entrance draws an enormous pop, and he and Booker have a highly entertaining 20-minute match with dueling Rock Bottoms/Book Ends and multiple finisher kickouts.  Booker goes for the Houston Hangover but misses, the Rock whips him into the ropes, hits a spinebuster, and finishes him with The People's Elbow to win the WCW Title. 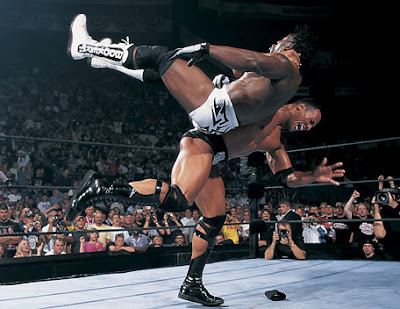 Austin vs. Hogan has an epic, big fight feel and is almost non-stop brawling.  Late in the match Hogan hits the big boot/legdrop, and Austin kicks out!  Hogan can't believe it, JR is amazed, Heyman is beside himself.  Hogan goes for another legdrop but misses, Austin bounces off the ropes and hits a Thesz Press, picks Hogan up and goes for the Stunner.  Hogan pushes him off into the referee.  Ref goes down, Austin hits the Stunner but there's no one to count the pin.  Austin goes to wake the ref, Heyman tosses Hogan some brass knucks.  Hogan knocks Austin out with the knucks, hits three legdrops in a row, and Bischoff appears out of nowhere with former WCW referee Nick Patrick, who counts the pin and awards the WWF Title to Hogan.  JR is furious as the show fades to black. 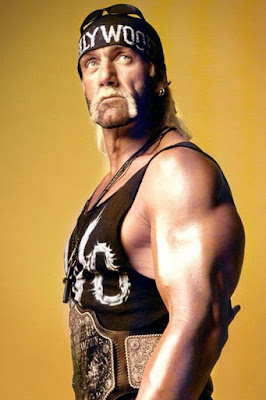 Posted by Justin Enuffa Ballard at 8:55 AM