Well, as expected that was a different sorta WrestleMania.  Like basically every edition it had its ups and downs, but fortunately this review is mostly positive.  (Check out Night 2 HERE) 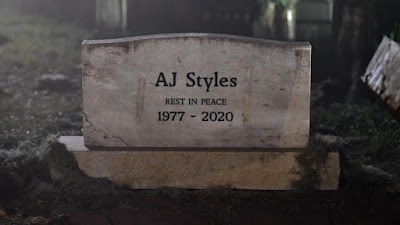 Number 36 is in the books and it was definitely a mixed results-type show.  The lack of live crowd certainly hurt the overall vibe but everyone worked hard to negate the effects of the room silence; one side effect that was often entertaining was being able to hear the wrestlers trash-talk during each match.  My biggest complaint is that on both nights the final two matches were either underwhelming or just plain stupid.  Why Vince thinks a top championship match going under five minutes is acceptable at WrestleMania, I'm sure I don't know.  But we'll get to that.  Let's review Night 1....

After a pretty entertaining 4-minute pre-show match pitting Cesaro against Drew Gulak (I'd like to see more of this pairing with 12 minutes to work with), the proper show began with the Womens' Tag Titles.  Asuka & Kairi Sane faced Alexa Bliss and Nikki Cross, in a pretty well-worked match that just went too long.  In front of a crowd this 15-minute match might not have worn out its welcome, but here it ended up dragging a bit by the end.  Asuka came off great in this empty-arena environment though, taunting her opponents for much of the bout.  She's so good in this heel role.  The Kabuki Warriors dominated much of the bout, but in the end the babyfaces hit a Cross neckbreaker/Twisted Bliss combination on Kairi to regain the belts.  I'd have liked to see Asuka and Kairi hold onto the straps for a full year or so, but six months is a solid reign.  This was a fun opener that just went about three minutes too long.  ***

The match I was least looking forward to was next, as Elias faced everyone's favorite reason to change the channel, Baron Corbin.  After an angle on Smackdown where Corbin knocked Elias off the camera perch to the concrete floor, they teased Elias not being able to wrestle.  But of course Elias came out, not selling anything, bashed Corbin with his guitar, and the match was underway.  This ended up an okay 9-minute TV match but nothing more.  Corbin dominated a lot of the action but after a rope-assisted pin attempt that failed, Corbin got rolled up by Elias (with a handful of tights) for the three.  Well it was inoffensive at least....  *1/2

The most baffling match placement of either night was next as Becky Lynch defended against Shayna Baszler.  How this went on third and only got eight-and-a-half minutes is beyond me.  This was pretty much all action as they traded strikes and submission attempts back and forth.  Becky at one point hit a uranagi on the apron which looked great.  The match ended when Becky went for Disarm-her but Shayna reversed into the choke.  Becky refused to submit and did the Bret Hart-Steve Austin spot where she rolled backward to pin Shayna and retain.  A year into Becky's title reign this was the wrong move, Shayna should've won here.  But I assume we'll see a rematch given the fluky finish.  One of a few booking decisions that didn't make sense to me, but a solid if underwhelming match.  ***1/4 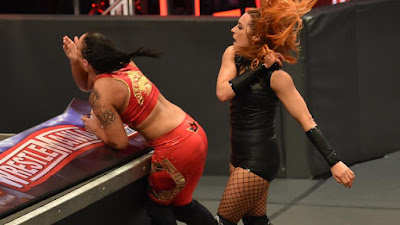 Match four was the disappointment of both shows for me, as Sami Zayn faced Daniel Bryan in what turned out kind of a nothing match.  Zayn spent the first couple minutes stalling and running away from Bryan, but Drew Gulak took out both Nakamura and Cesaro on the outside.  Zayn threatened to walk out and Bryan told him to go, but then chased him up the ramp and threw him back in the ring.  Bryan did his usual strikes and kicks (I still want to know why he hasn't broken out the old American Dragon grappling stuff in WWE), dominating Zayn for several minutes.  Nakamura and Cesaro came back out, beat down Gulak, and Bryan hit a suicide dive on both guys.  Then a psychology-free finish ensued, as after kicking Zayn's ass all over the place, Bryan went for a missile dropkick but was met with a Helluva kick and got pinned.  Just like that, out of nowhere, Bryan was taken out with one move.  What an idiotic ending.  This match did very little for me, and if this feud doesn't lead to Bryan vs. Nakamura on a major PPV, what was the point?  I was hoping this would steal the show but it wasn't given the chance and thus didn't even come close.  **

Things picked back up with the Triple Threat Ladder Match as John Morrison finally got a chance to remind everyone what a unique talent he is, defending the Smackdown Tag belts against Kofi Kingston and Jimmy Uso.  This was another match that would've killed in front of a crowd, but even in silence it was a lot of fun.  There were numerous big spots but the highlight of the match was Morrison walking across the top rope, hands-free, from one corner to another and then hitting a Spanish Fly on Kofi.  After all these years Jo-Mo finally got his WrestleMania moment.  Jimmy Uso took an obviously edited bump from the top of a ladder to the floor, as he landed off camera, almost certainly on a crash pad.  At the end all three guys ended up on different ladders and going for the belts.  They unhooked the belt holder and a tug of war broke out, but Kofi and Jimmy headbutted Morrison simultaneously and he pulled both belts off the hanger and fell to a bridged ladder below, retaining the titles.  Not an all-time great ladder match by any means, but this was quite good.  ***1/2 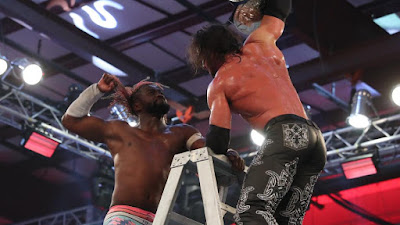 Match of the Night honors went, by a significant margin, to Seth Rollins vs. Kevin Owens, a heated, crisply worked brawl that managed to overcome the lack of an audience and included a crazy spot that will be long-remembered.  These two former ROH Champions did their best to tear the house down, with loads of nearfalls, finisher counters, a Falcon Arrow on the apron, and a Curb Stomp attempt countered into a Pop-Up Powerbomb, before Seth ran away and hit Owens with the ring bell to draw a disqualification.  I was seriously pissed for about thirty seconds, thinking this was the actual finish.  But Owens took the mic and demanded a restart with no disqualification, and Seth obliged.  Relishing the new lack of rules, Seth hit Owens with the ring steps and whacked him over and over with a chair, then tried to set him up on the announce table.  But Owens used the bell, laid Seth on the table, and came off the big WrestleMania sign above with a brutal-looking elbowsmash through the table.  Owens rolled Seth into the ring and hit the Stunner to win the match.  Helluva fight that would've been a classic in front of an audience, but was still good enough to steal the show.  **** 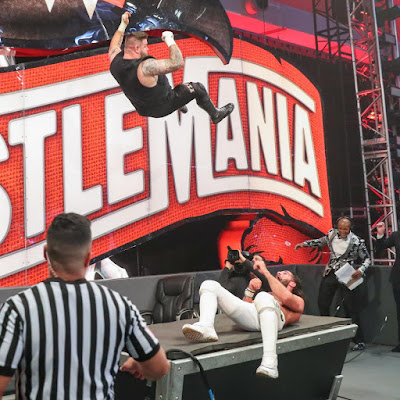 At this point the show drove right off a cliff.

The Universal Title match consisted of Braun Strowman going for a powerslam, Goldberg slipping out and hitting four spears, Goldberg going for a jackhammer, Strowman countering into a powerslam and three more powerslams to win the belt.  They sacrificed red-hot merch mover Bray Wyatt, to Goldberg, for this.  A two-minute match consisting of two moves.  Fuck this place.  This is why you don't put top belts on old fucks.  DUD

Now for the most controversial match of the evening, if you can call it a match - AJ Styles vs. The Undertaker (using the American Badass gimmick) in a Boneyard Match.  For some reason most people loved this.  I cannot wrap my brain around that; I thought this was absolute twaddle.  Think Broken Matt Hardy's Final Deletion, except not funny.  This was a badly shot action-horror film sequence that took place in a cemetary, under Buried Alive rules.  And it had a background score, cinematic camera angles, silly pyro effects, and a teleportation.  Yeah, that's right, a teleportation in the middle of a match.  AJ had the match won, bashing Taker in the face with a shovel and tossing him in the open grave.  But when he went to dump the dirt on him, Taker suddenly appeared behind him, fresh as a daisy.  So hold on though, why doesn't Taker just do that in every match when he's on the verge of losing?  Yes, I know he disappears and reappears all the time in angles, but he's never done it during an actual match before.  So now he literally has the ability to not only teleport, but can also instantly shake off any damage sustained.  This made Hogan's superhero comebacks in the 80s seem realistic by comparison.  So SuperTaker then beat the shit out of AJ, took out a host of druids, threw Gallows off the roof of a building, Tombstoned Anderson on the roof, and chokeslammed AJ off the building onto some wood pallettes.  He shit-talked AJ, who was now crying and begging not to be buried (Too late AJ, you already were).  Taker hugged him, saying he gave him a good fight, and teased walking away, but then kicked him into the grave and buried him.  Taker drove away on his bike and they showed AJ's hand sticking out of the dirt.  Yeah, this was stupid.  And had no business going on last.  And did zero for AJ, who had already been pinned by The Undertaker after a single chokeslam.  AJ was buried literally and figuratively.  1) Why are we continuing to sacrifice full-time stars to a twice-a-year 55-year-old who needs movie editing to make his matches not suck?  2) If I wanted to watch bad horror movies I'd subscribe to Shudder.  This could've just been a Buried Alive match, presented as a live contest, and been a whole lot better.  I don't think I can stomach months of WWE patting themselves on the back for how "innovative" this was, nor the inevitable Match of the Year nomination it gets on RAW in December.  Ya stole Matt Hardy's idea, get over yourselves.  * 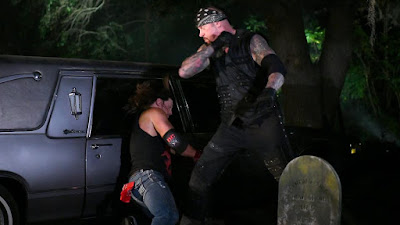 So yeah, under the circumstances Night 1 was an okay show.  A few of the matches would've really benefitted from a live audience, but there were still four good to excellent bouts.  The biggest problem was the final two matches being crap.  But while it didn't feel like a WrestleMania (nor did Night 2), but it was an easy-to-watch three-hour show.
Best Match: Rollins vs. Owens
Worst Match: Goldberg vs. Strowman
What I'd Change: Make Becky-Shayna the main event (and give Shayna the belt), make Taker-AJ a Buried Alive match without presenting it like a bad movie, give Zayn-Bryan a lot more time.
Most Disappointing Match: Sami Zayn vs. Daniel Bryan
Most Pleasant Surprise: That any of the matches worked without an audience
Overall Rating: 7/10
Click here for the Night 2 review!