Welcome back to this two-part WrestleMania 36 review.  Night Two was another very mixed show, I would say a step down from Night One overall, as it only featured one really noteworthy match and more baffling booking/time management decisions.  Check out Part 1 HERE. 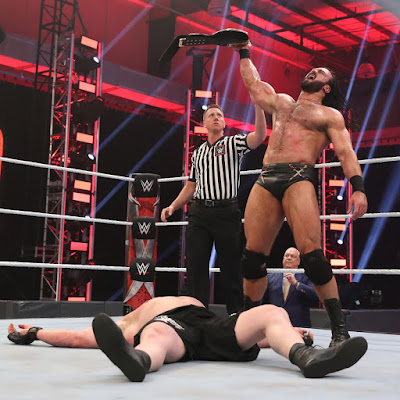 Things kicked off with Rhea Ripley defending the NXT Title against Charlotte Flair.  They got twenty minutes to put together a really physical, intense match, and they made the best of it.  Ripley hit the Riptide two minutes in but Charlotte kicked out, and a little while later Charlotte took out Ripley's knee and worked it relentlessly.  Ripley sold the knee really well and settled into an underdog babyface role as a result.  She made the babyface comeback toward the end, hitting a top-rope dropkick and her reverse cloverleaf, but Charlotte escaped.  After some good nearfalls, Charlotte locked in the Figure Four and then bridged up, and Ripley tapped.  Just like with Asuka two years ago, WWE dropped the ball on having a hot new star defeat the Queen at WrestleMania.  I will never understand why Vince is the enemy of creating new stars.  Now was the time to push Ripley to the moon.  She has everything you could want in a wrestling star - youth, a fantastic look, charisma, and strong in-ring ability.  Where's the problem?  I get that Flair's presence on NXT will ostensibly improve ratings, but why does she need the title to do this?  Sure, Ripley can chase her and win it back at a TakeOver, but once again you've shown everyone that the new kid isn't as good as the woman who wins all the time.  Make new stars, dipshit; it's the lifeblood of your business.  All that said, this was easily the match of the night, and for my money the second-best match of the weekend.  **** 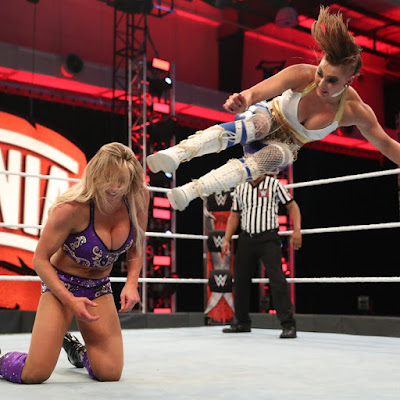 They followed it up with a solid little match in Aleister Black vs. Bobby Lashley.  These guys only got seven minutes but the match was filled with action.  Early on Lashley hit an overhead throw on the floor, but Black made a comeback and after a failed first attempt, finally hit an Ibushi moonsault to the floor.  Lashley was about to go for the Dominator but Lana demanded a spear for some reason.  Lashley bounced off the ropes for a spear but ran into Black Mass for the pin.  As Black celebrated, Lashley shot Lana a dirty look for screwing up his match.  This was decent.  **3/4
The match I was dreading was next, as Otis faced Dolph Ziggler.  They had a basic TV match with pretty nondescript action, culminating in Otis going for the Caterpillar until Sonya Deville jumped up on the apron for a distraction.  When Otis went after her, Ziggler low blowed him.  Suddenly Mandy Rose ran out, slapped Sonya in the face, and low blowed Ziggler.  Otis hit the caterpillar elbow drop for the win (why this move would finish anyone I dunno).  Otis carried Mandy up the ramp and they kissed.  Thus ended Dolph Ziggler's first singles WrestleMania match.  Jesus.  This match was inoffensive but not particularly good.  **

Now for the match that most everyone hated.  Edge vs. Randy Orton, Last Man Standing.  Was I right or what?  LSM is a terrible stipulation.  The matches go 50% longer than they need to thanks to all the stupid referee counting.  How about going forward the wrestler in control of the match tells the ref when to count, and then if both guys are down the ref counts on his own?  Anyway I didn't hate this match.  I liked the second half of it pretty well.  But it went 36 fucking minutes.  What asshead edited this match and couldn't find another 10-12 minutes to trim out of it (in particular the spot where Orton tried to hang Edge on the weightlifting machine, all too reminiscent of Chris Benoit - what the fuck were they thinking??)?  These guys brawled all over the performance center, through the gym, through the conference room, into the storage area, eventually finding themselves on top of an 18-wheeler container.  Edge hit a spear but both guys got up.  Orton hit an RKO but both guys got up again.  Orton went for a conchairto but Edge choked him out, and then, in tears, hit his own conchairto for the win.  This match should've just been a Falls Count Anywhere match and gone 18 minutes, and it would be approaching four stars.  They both worked hard but the ref counting stopped the match dead in its tracks every minute or so.  Stop booking LSM matches.  The format inherently ruins them.  On balance because of the hard work and emoting at the end I'll be generous and give this ***.

We went from slow and overlong to short and sweet, as Street Profits defended against Angel Garza and Austin Theory in a six-and-a-half minute sprint.  This was all fast-paced action with loads of big moves until Ford hit a frog splash on Theory for the pin.  The heels attacked the champions after the match but Bianca Belair made the save, and I guess her main roster debut.  Hey, maybe they'll build Belair up for a while and then have her lose to Charlotte at next year's 'Mania....  This was fine.  **3/4

Next up was the Smackdown Women's 5-way match, which surprisingly got 19 minutes now that it was elimination rules.  The first elimination came six minutes in as everyone hit big moves on Tamina and pig-piled on top of her for the pin.  Next was Naomi, who tapped out to the Bank Statement.  Lacey Evans then played the babyface in peril against Bayley and Sasha, but came back to hit the Woman's Right on Sasha as Bayley sat back and allowed her to be pinned.  Lacey looked much better here than she has in the past, though still a bit green.  She hit a moonsault for a nearfall but Sasha ran in and hit a backstabber, and Bayley hit her new finisher to retain.  So Bayley allowed her friend to be pinned, while Sasha still helped Bayley win.  When this feud does happen it looks like Sasha will be the babyface.  Either that or they'll tease it for six months and never have the feud....  This match was, again, fine.  ***

Alright, here's another match most people seemed to hate but I didn't.  I guess "match" isn't the right word.  This was essentially a dream sequence.  John Cena came out to wrestle but somehow ended up on the Firefly Fun House, where Bray Wyatt derided him for not putting him over six years ago and announced he'd be facing his toughest opponent yet, himself.  From there we got a series of surreal scenes, like a recreation of Cena's 2002 debut, a hilarious Saturday Night's Main Event spoof (I'm guessing this was based on a childhood fantasy of Cena's), a throwback to his Thuganomics character, a recreation of the WrestleMania 30 match, where this time Cena swung the chair Wyatt handed him, but Wyatt vanished.  Then we were on the set of WCW Nitro, where Cena did a Hollywood Hogan-style entrance (presumably as a nod to everyone who said he should turn heel a few years ago like Hogan did in 1996).  Cena attacked Wyatt again but Wyatt disappeared and the Fiend appeared behind him, put him in the Mandible Claw, and Wyatt counted his shoulders down for three.  They cut to a hiliarous shot of Titus O'Neil (taking over as the host after Gronk won the 24/7 Title and ran off), his hand on his head with a stunned look on his face, and after a few seconds he just said "I don't know what I just saw...."  So yeah, like the Boneyard Match this was a movie sequence instead of a match, but unlike that, I actually found this really entertaining.  Stupid, yes.  Silly.  Nonsensical.  But where AJ-Taker attempted to pass itself off as some kind of serious, epic fight, this was pure camp, and reveled in it.  I'd liken this to Batman 1966, while the Boneyard Match was Batman v Superman.  Both movies are garbage, but at least the former knows it's garbage.  The latter thinks it's art.  I won't attempt to rate this, but suffice to say I got a kick out of it.  NR 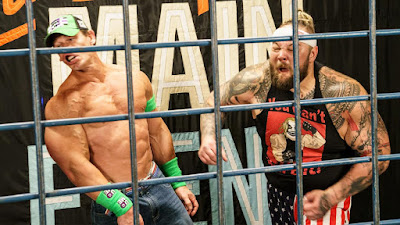 Now for what passes for a WrestleMania main event in 2020.  Brock Lesnar vs. Drew McIntyre.  I went into this hoping for a 10-12 minute slugfest where these guys just beat the shit out of each other.  Instead we got a carbon copy of the Goldberg match.  The champion hits four finishers but can't get the pin.  The challenger then hits four finishers and gets the pin.  That was it.  Four minutes of two moves.  How divorced from your audience do you have to be to think this is WrestleMania main event-worthy?  I mean it's a great moment for Drew, though sadly it didn't happen in front of an audience, but this wasn't even a match.  If this is all Brock has left to offer, sub-five-minute finisher fests, then I don't want to see him wrestle anymore.  What fucking lazy, psychology-free booking.  Like, if these guys can just hit their finishers over and over until they win, why don't they do this all the time?  This sucked.  *1/2 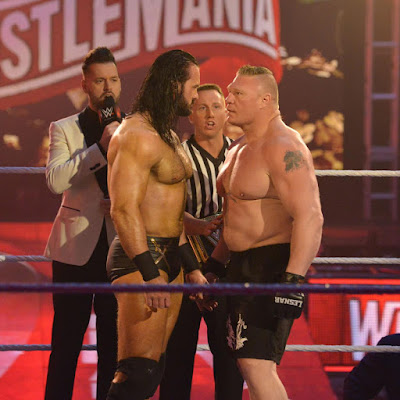 So yeah, Night 2 was easily the lesser show.  Only one **** match (with the absolutely wrong result), a couple *** matches, one of which went twice as long as it should have, a main event that was worthless aside from elevating a new champion, and a goofy dream sequence.  I'd give Night 1 a thumbs-up overall, while Night 2 is a thumbs in the middle.


Posted by Justin Enuffa Ballard at 10:21 AM