Welcome to a very weird round of WWE Predictions here at Enuffa.com!  Hope everyone is staying safe and healthy during this pandemic.  Take every opportunity to thank and appreciate our healthcare workers and all the other essential employees who still have to go in. 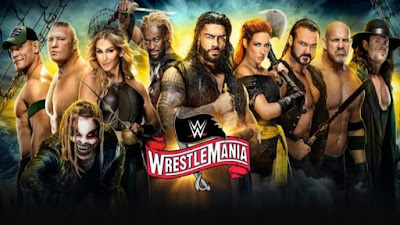 Well, this year's WrestleMania went from very underwhelming to just bizarre.  Instead of one 7-hour broadcast we're getting two nights of it.  No word about which matches will be on which night, which is pretty inexcusible given the next point.  Instead of a live broadcast the PPV was taped last week over two days.  Instead of a packed stadium the venue will be the Performance Center and a few other closed locations.  This show is going to be unique, probably in all the wrong ways.  WWE would've been well-advised to simply postpone WrestleMania until the summer.  But then if they didn't stop Over the Edge 1999 when one of their wrestlers died in the ring, why would a little thing like a global pandemic slow them down?

Anyway, this lineup is a smorgasbord of random stuff.  Some of it has a lot of potential, some of it has none.  One of the main events is off, since Roman Reigns opted not to participate given his compromised immune system.  Good thing Vince sacrificed Bray Wyatt to Goldberg just so Roman could beat him, huh?  This right here is what happens when you book only for right now and not for the future.  So we have yet another 'Mania whose top matches are dominated by old guys and part-timers, but on the plus side there's no Triple H match for the first time since 2007.

But enough ballyhoo, let's get to the predictions.... 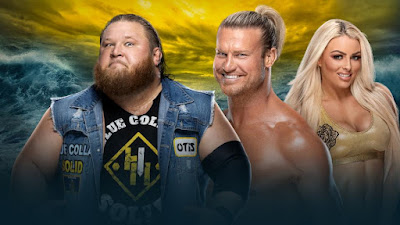 Who thought this match was WrestleMania-worthy?  I know these two are feuding, but how about a tag match at least?  Ziggler and Roode vs. Heavy Machinery?  Hello?  Why is this feud important enough for a singles match on the biggest show of the year?  But, ya know, nothing for Shinsuke Nakamura or Cesaro...  Boy do I not care about this.

Pick: Otis I guess.  Who gives a shit? 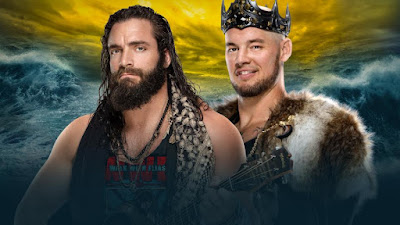 Speaking of matches I don't give a shit about, what in god's name is this doing here?  Yeah, let's pit the two worst wrestlers in the company against each other at WrestleMania.  What could go wrong?  Is anyone tuning in for this match?

Pick: Elias?  This match will have no effect on the universe whatsoever. 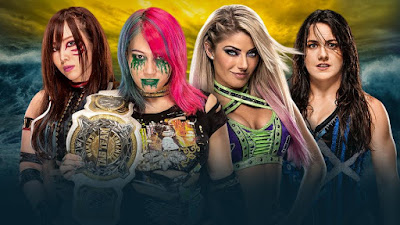 Not sure what happened to Beth Phoenix and Natalya, who were supposed to be in this match as well.  I'd much rather see those two challenge here than Alexa and Nikki.  This should be decent given how good Asuka and Kairi are.  I fear they'll just be putting the belts back on Alexa and Nikki, because "Only English-speaking wrestlers can get over."  I hope I'm wrong.  Asuka and Kairi should jump to AEW. 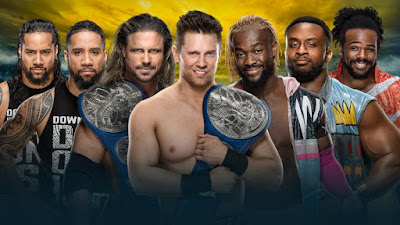 Well, Hardyz-Dudleyz-Edge/Christian this ain't.  But it should be a fun little car wreck.  Morrison and Kofi especially should come up with some innovative spots.  Miz and Morrison just won these belts so I see no reason to take them off already. 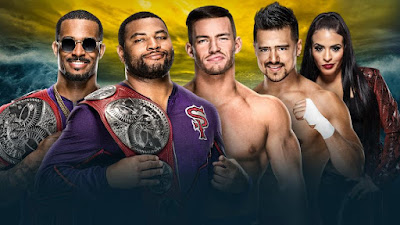 Andrade was supposed to be Angel's partner but got sidelined with an injury.  No idea why the US Champ was involved in a tag title match here but whatever.  This should be a solid RAW-quality match but little more.  Another match where I don't see any reason for a title change. 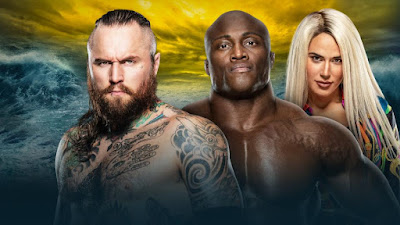 This feels like one of those thrown-together matches on old-school WrestleManias where there isn't really a feud but both guys needed something to do.  Should be alright I guess.  Black is being terribly wasted on the main roster; they obviously called him and Ricochet up last year without any sort of plan for either of them.  Black didn't have a PPV match for months and Ric isn't on this show at all.  Why is this roster so bloated? 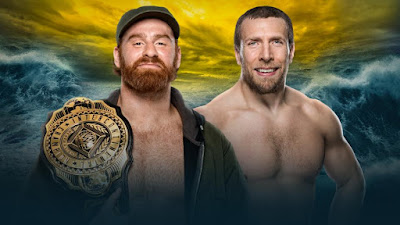 One of the few matches I'm looking forward to, but why in the fuck didn't they book Bryan vs. Nakamura, a huge first-time matchup, on the biggest show of the year?  How does Nakamura get reduced to a corner man role?  I assume this match will set up that one, but for fuck's sake....  Bryan vs. Gulak stole the show last month and I expect Bryan vs. Zayn to do the same.  I also think Bryan wins the belt here so Nak can challenge him later on. 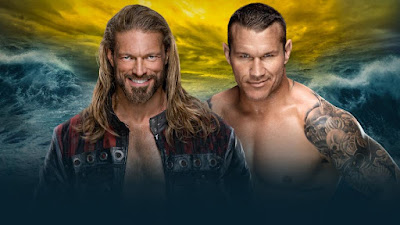 This is the feud they've done the best job of building up, by far.  If you only watch WWE for the angles and promos this is the match you'd be excited for.  Both guys have put in tremendous work to hype this match.  Motivated Orton is so different from Regular Orton.  I expect Edge is hellbent on delivering a career highlight after a nine-year layoff, so this match should be strong and full of good storytelling.  Hopefully they can overcome the inherent limitations of the Last Man Standing gimmick.  God I hate LSM matches.... 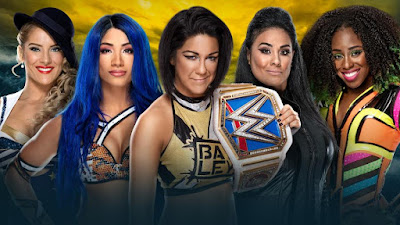 Oh good, a 5-way shmozz.  Why is Tamina involved?  The other four have been wrestling each other in tag matches so they at least make sense, but why add a fifth woman?  Also how ridiculous is it that Bayley and Sasha STILL haven't had a main roster feud?  Eh, this'll be hit or miss and probably short.  Again, I see no reason to change the title here.  Save that for Bayley vs. Sasha one-on-one. 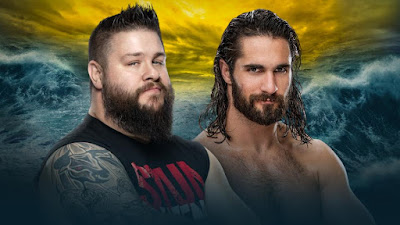 Another match I'm actually interested in, it's the battle of former Ring of Honor champs.  Both of them are great when they're motivated, so this could steal the show and should get a good amount of time.  Rollins is a natural heel, while Owens as a babyface is.....strange to say the least. 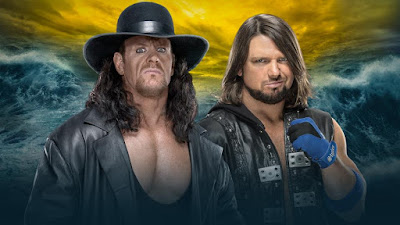 This right here is gonna suck.  Why Taker feels the need, in his condition, to keep trotting out every year is beyond me.  I think in his mind he's hoping for something akin to his bouts with Shawn a decade ago.  But 55 is not 45, and time waits for no one.  The Boneyard stip is obviously designed to a) hide Taker's myriad of mobility issues and b) avoid having every match take place in the empty Performance Center.  I expect this to be hokey and lame.  AJ better win at least. 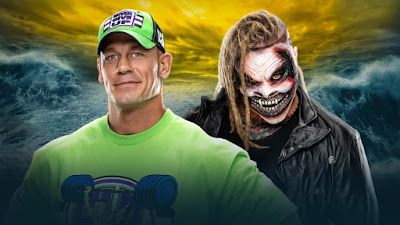 Another goofy gimmick match.  Anyone see that House of Horrors match with Wyatt and Orton back in 2017?  Yeah, that was embarrassing.  I'm guessing this will be a lot like that.  The one positive here is that Wyatt will get the WrestleMania win over Cena he should've gotten six years ago.  Too bad he got jobbed out to Goldberg in three minutes, he might still have momentum otherwise. 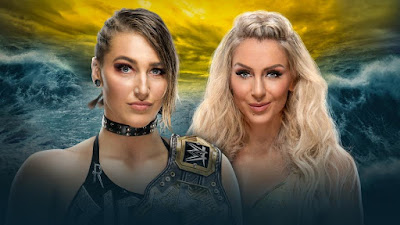 This should be pretty boss.  Charlotte is already an all-time great women's wrestler, while Ripley has IT.  She's still young and green but she more than makes up for that with physical presence and general badassery.  If anyone can get a career-defining match out of Ripley it's Charlotte.  Ripley needs to retain here, as she just won the belt in February and needs more time as one of the top stars of NXT.  But a main roster call-up has to be on the horizon. 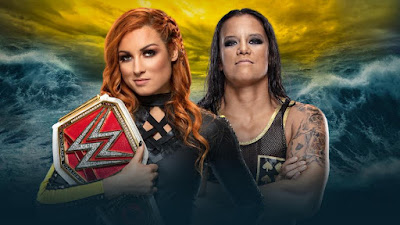 Hopefully this match will live up to its potential; the women's main event at Survivor Series 2019 sadly did not.  This feud has been built up in simple-but-effective manner - Becky is the gallant champion, one full year into her title reign, Shayna is the murdering beast who singlehandedly mauled five other women in the Elimination Chamber.  This is a classic good vs. evil showdown and it's a shame it won't happen in front of a stadium full of fans.  Shayna has to be the one to dethrone Becky.  Then they can set up Becky's chase and eventual redemption at SummerSlam or something. 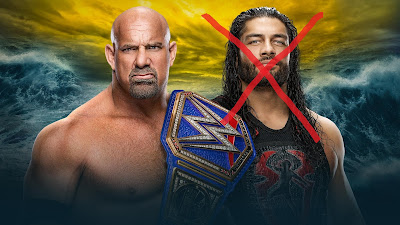 Yes it seems Braun Strowman has taken Roman's spot on this card.  Goldberg vs. Roman could've been a decent five-minute finisher-fest.  Goldberg vs. Braun ain't much of a match at all.  This is gonna be two minutes of nothing.  So then what, Strowman holds the belt and Roman chases it?  Seen that match about a zillion times....

Well, this is it.  Put up or shut up.  I still don't see Drew as The Guy, particularly given how little they did with him for the two years prior to his Rumble win.  But maybe this match will have a Vader vs. Sting kinda vibe and Drew will actually catch on.  Provided they don't just do the usual lazy Brock match, this is something new at least.  Drew obviously has to win.


Well there's your lineup.  Spread out over two nights in front of an actual crowd, this could've worked pretty well.  We wouldn't have a bunch of exhausted fans for the big main event like we did last year.  In the empty Performance Center I don't have very high hopes for a WrestleMania-worthy show.  Take care everyone, stay safe!