I love poker.  It's one of the greatest games ever invented; a unique mix of skill, lying, reading people, and just plain luck.  No other game meshes these aspects together like poker, and no poker variation is as pure and elegant as Texas Hold 'Em.  And no movie is as responsible for popularizing Texas Hold 'Em as Rounders. 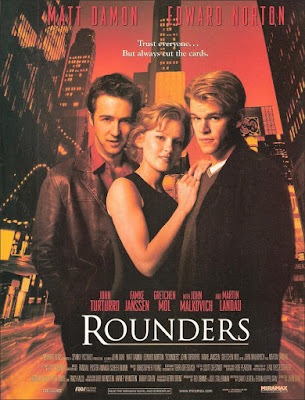 Released in 1998 and starring Matt Damon, Edward Norton and John Malkovich, Rounders tells the story of a prodigious poker player named Mike McDermott who loses his entire bankroll one night and vows never to return to the table.  That is until his best friend Worm gets out of jail and essentially drags him back into the seedy New York poker underworld.  Mike and Worm then find themselves desperately trying to win $15,000 in just a few days to avoid being killed by loan sharks, and Mike rediscovers what made him fall in love with the game to begin with.

Rounders is a riveting, taut thriller but also a darkly comic, eminently quotable cult film about following our passions and staying true to what we are.  It also features one of the least plausible scenes of all goddamn time.

About halfway through the film Mike's live-in girlfriend and fellow law student Jo discovers that Mike has broken his promise to stay away from gambling, and while he's out, she packs up all her shit and moves out of their apartment.  Mike comes home to find Jo's things gone, and is quite frankly neither surprised nor all that visibly upset.  He and Worm then drive to Atlantic City for a night of poker shenanigans and it's just like old times.


Soon after this, Mike is seen alone in his apartment watching an old World Series of Poker VHS tape, when his friend and fellow gambler Petra (an unreal sexy Famke Janssen) shows up to talk to him about Worm.  Petra works at one of their regular poker clubs, and she informs Mike that Worm has run up thousands in debt, in Mike's name.  Then this exotic, statuesque Eastern European bombshell, who gushes like a school girl whenever Mike is around, begins kissing Mike and asks to stay.  Ya know, so they can touch each other in a very impure manner.  Probably multiple times.  Whichever way Mike fancies.  Instead, Mike awkwardly pulls away and says he'll see her soon, and she leaves.


Now look, assholes, I can buy all the over-the-top poker showdowns, I can buy the montage where Mike and Worm play high-stakes games at places like country clubs, cigar bars and even what appears to be a Greek sandwich shop, I can buy Worm totally fucking up Mike's shit at the State Troopers' game with super-obvious deck stacking that anyone who's ever laid eyes on a playing card could spot, hell, I can even buy John Malkovich's outRAGEous Russian accent.  What I can't, and WON'T swallow is a handsome young fella whose girlfriend has just hit the bricks turning down a wild night of horizontal mattress bingo with Famke fucking Janssen.  It would never happen.  In any realistic universe the second she starts kissing him, that apartment is pure bedlam.  What few possessions he has left would be strewn about the floor, out the window, probably shoved up his ass.  There's zero chance he'd let her do any less to him than ANYTHING SHE WANTS.  I'm sorry Michael, you're simply not a believable character anymore.  Quite frankly I hope Teddy KGB takes every red cent you own.


Posted by Justin Enuffa Ballard at 8:54 AM