Before I get started, let me preface this by saying I love It's a Wonderful Life.  Absolutely love it.  It's one of my top ten all-time favorite films, I've loved it since I was about nine years old, my wife and I watch it every year at Christmastime without fail.  I adore this film. 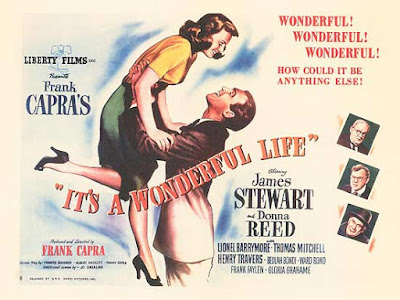 Released in 1946, It's a Wonderful Life was Frank Capra's favorite of all his movies.  The story of the downtrodden everyman George Bailey (in THE performance of Jimmy Stewart's career), who is visited in his most desperate hour by a guardian angel, was based on a short story called The Greatest Gift, written on a Christmas card by Philip Van Doren Stern in 1939 and published in 1944.  RKO Pictures optioned the film rights and went through three screeplay drafts before deciding not to move forward with the project, and sold the whole kit n' kaboodle (plus the three drafts) to Frank Capra's Liberty Pictures for a cool ten grand, exactly what they paid for it in the first place.

Capra fleshed out this simple fantasy parable into a 130-minute dramedic masterpiece, about a small-town fellow who is unselfish to a fault, having spent so much of his life helping everyone around him he has become disillusioned and discouraged, ultimately neglecting his own dreams.  George Bailey had planned from an early age on becoming a successful architect and builder, hoping to design skyscrapers and bridges, travel the world, and be someone of great importance.  But circumstances being what they are, George never leaves his hometown, instead inheriting his father's Building & Loan business and spending decades trying to save the townspeople from financial ruin at the hands of Bedford Falls' evil tycoon Mr. Potter.  When George's business faces collapse itself, George contemplates suicide, but is visited by his guardian angel Clarence, who shows George just how important he's been to everyone in his life.  Realizing his desperation was a shortsighted mistake, George rushes home to his family and friends, and all is well.


It's a Wonderful Life is almost a spiritual cousin to A Christmas Carol, in that its protagonist is visited by a spirit and gets to see an alternate reality of sorts.  George learns during this experience that without his efforts at the Building & Loan Mr. Potter would've taken over the entire town and turned it into a sleazy, Vegas-like locale while keeping all the residents living in run-down slums.  Without George to save his brother Harry's life as a child, Harry would never grow up to be a war hero who saved the lives of hundreds of American soldiers.  Without George to take over the Building & Loan his Uncle Billy would end up in an asylum.  Without George to broker affordable home loans for his friends Martini and Ernie, Martini would lose ownership of his bar and Ernie would lose his marriage.  And without George to stop the local pharmacist from inadvertently poisoning a child, Mr. Gower would've become a homeless convict.  This is all very powerful, emotional stuff.  George has changed so many lives for the better, and become a hero to the entire town.  He learns that for all his perceived failure, he has succeeded in much more profound ways.

But here's my one gripe about this incredible, uplifting film: When George asks Clarence to see what happened to his wife Mary in this alternate reality, it's revealed that had George never been born, Mary not only would never have married, but would end up working as a librarian, AND WEARING GLASSES.  Huh???


Look, I can accept, in this idyllic fantasy film about angels and supernatural wish granting, that without George Bailey in her life an idealistic, independent woman like Mary might never have found any other man worth marrying (though the wealthy entrepreneur Sam Wainwright surely would've made her an offer and a scene depicting Mary and Sam in a loveless, unhappy marriage could've been quite effective).  I can accept that instead of being a devoted homemaker and mother of four, this lonely spinster version of Mary might never have found any sort of fulfilling career and thus whiled away her years of solitude at the public library.  But I draw the line at "Without George Bailey, Mary Hatch would've had poor eyesight."  That my friends, is a bridge too goddamn far.  Is George supposed to be Jesus now?  He can get you an equitable mortage AND endow you with 20/20 vision!  This is one pill I will not swallow.  No indeed.  Is that what finally sets George over the edge and snaps him back to reality?  "Oh lord, what have I done?  My brother died at age 9, my uncle's in the loony bin, my mom's an unpleasant ol' bitch, Ernie's a degenerate shack-dweller, Martini is off doing god-knows-what, and Mr. Gower's a drunk vagrant loser.  Oh well, at least my family's not ruin-- HOLD THE FUCK ON.  MARY'S GOT GLASSES NOW??  No, this will not stand.  I did not erase my own existence to watch Mary turn into some kinda myopic Poindexter.  Bullshit, Clarence, get me back home!!!"

I will always love this film, but come on Frank, lose the fucking glasses!  You were THIS close to your movie being perfect!

Posted by Justin Enuffa Ballard at 8:57 AM