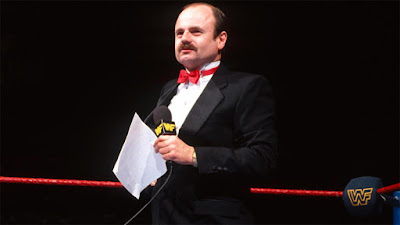 Legendary WWF/WWE ring announcer and Hall of Famer Howard Finkel has passed away after several years of worsening health problems.  Finkel was for decades the voice of the company, serving as the primary ring announcer from the late 1970s until the early 2000s.  When I started watching wrestling in 1986, Finkel's unique, throaty delivery immediately caught my ear, and to this day when I think of how a ring announcer should sound, The Fink's voice is what springs to mind (Sorry, Michael Buffer).  By contrast the NWA's ring announcer at the time Tom Miller had a stilted quality to his delivery, while I always found his successor Gary Cappetta's voice too nasal and thin for that role.  But Fink's voice had a grandeur about it.  No matter how inconsequential the match, when Fink got up there and announced the participants, it felt like a big deal.  And when there was a title change, whoa baby.  "Your winner, ladies and gentlemen......and NEEEEEWWWWW World Wrestling Federation Champiunnn...."  There was no one like him in that role and there never will be again.

Howard Finkel is also credited with coming up with the name WrestleMania.  Yeah, no big deal.  Finkel named the biggest and longest-running PPV event in wrestling history, what of it?  It's only the most universally recognized event name ever, and it came from this little balding man with a huge voice.  I seriously hope he and his family continue to get massive royalty checks for that in perpetuity.

Howard Finkel's contributions to the wrestling industry were significant and lasting.  He and his signature ring announcing will forever be missed.  Godspeed to the greatest ring announcer of all time.