Our new feature Movies of Disbelief will focus on one unforgivable aspect of a movie that already has a lotta problems.  Because why not? 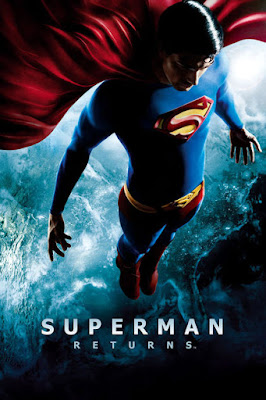 Ah, the much-maligned Superman Returns.  Bryan Singer's 2006 attempt to relaunch the Richard Donner Superman franchise was the amalgamated end-result of multiple aborted projects (including the infamously unfilmed Nicolas Cage version) and ended up costing an absurd $250 million all told.  Starring Kevin Spacey as Lex Luthor, Kate Bosworth as Lois Lane, and newcomer Brandon Routh as the Man of Steel himself (in an admirable performance that more or less channels Christopher Reeve's), Superman Returns takes place five years after Superman II, when Kal-El, umm......comes back to Earth after investigating a supposed Krypton sighting.  The sighting turned out to be nothing, making Supes' entire disappearance no more than a half-assed, unimaginative plot device (Jeezus guys, come up with SOME valid reason for him to be missing, will ya?), and Superman gets back to saving people and thwarting Lex Luthor's evil schemes. The film opened to much fanfare, but left audiences and critics pretty cold.  The bloated 154-minute running time, the rather languid pace, and an excruciating subplot involving Lois's son who may or may not be the product of Kal's SuperSeed (Spoiler alert: He's Superman's kid. We all know from the start he's Superman's kid. That this film is at all coy about it is one of its biggest and stupidest issues.) all contributed to Superman Returns' lackluster box office performance, and the intended sequel was scrapped.


Superman Returns ultimately centers around yet another real estate-based plot hatched by Lex Luthor, to grow a new continent in the middle of the Atlantic Ocean, declare himself the owner of said landmass, and charge people truckloads of money to buy property on Lexarctica or LexAmerica or Lexstralia or whatever the hell he planned to call it.  To that end he makes a trip to Superman's Fortress of Solitude, steals a bunch of Kal's magical Kryptonian crystals (the ones that power his big alien computer console), and launches one crystal wrapped in Kryptonite (Real nice, a "humans only" rental policy - fuckin' racist...) into the ocean.  This film establishes (from something that I guess was implied in the 1978 movie) that these Kryptonian crystals grow like a Chia Pet on PCP when submerged in water, and one crystal shot into the ocean floor sprouts a massive, arid, gray continent.
This results in a catastrophic tidal wave that hammers New Yor-- uh, Metropolis, and Lex is banking that the middle third of the North American continent will be underwater by the time his new place is ready to rent out.


So here's my suspension of disbelief problem with this scenario, and I should note this is in a film about a nigh-invincible, flying alien man who can shoot lasers from his eyes and spin the planet in reverse: Are we actually supposed to believe that a) the half billion-or-so people displaced by this cataclysm, if they manage to avoid DROWNING, are just gonna go "Well Martha (WHY DID YOU SAY THAT NAME???), our whole homestead now swims with the fishes, let's go house hunting!  Oh look, that sinister bald man is offering reasonably priced real estate on that brand new pile of rocks!"; b) that no one's gonna figure out the guy claiming ownership of this unauthorized, satanic island is also the one responsible for its creation and thus the murder of the entire United States; and c) that any part of this mountain of rubble sitting in the middle of the ocean is habitable?  What's gonna grow on this gigantic pile of shit?  Who's gonna buy beachfront property that's missing THE BEACH?  And how does he expect his little 8-man operation to deal with the overwhelming demand he's supposedly planned for?  "Lex, I have 68 million callers on hold waiting to make you an offer for Lots 1 through 53,978."


I don't think Lex thought this through at all.  Hey Lex, if it's a fuckton of money you're after, why not just steal it like any reputable white-collar criminal instead of engaging in some convoluted Glengarry Farms terraforming conspiracy?  Did you learn nothing from the California missile fiasco of '78?

Posted by Justin Enuffa Ballard at 8:52 AM