Welcome to another edition of Top Ten Things here at Enuffa.com!  We give you ten examples of something we like or dislike, and arguments ensue.....

Today I'm discussing a topic that is, dare I say, not really near and dear to my heart, the movie musical.  By and large I'm not much of an enthusiast of the musical.  The idea of a narrative that's constantly being interrupted by its characters spontaneously breaking out into song & dance numbers has always struck me as such a strange concept.  Why does a character need a four-minute song to convey a simple thought or feeling when two lines of dialogue will do?  Why does a film's running time need to be inflated to three hours when there's only 90 minutes of story to tell (Sound of Music, I'm looking in your general direction....)?

That said, there are movie musicals I value quite a lot, either because the story and performances resonate with me, or because the songwriting is so strong, or some combination thereof.  A great musical number can add emotional depth to a scene that wouldn't even be emotionally engaging, simply because of the artistry on display.  I've found myself getting unexpectedly choked up during certain numbers due to the execution being so spectacular.

One thing I should note about this list: I have not included any Disney films because the list would be almost exclusively Disney, and that would be kinda boring.  So I've left those movies out. 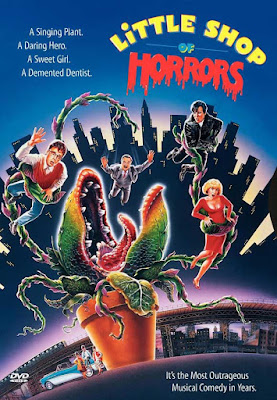 This one's been a favorite since I was eleven years old.  In the mid 80s my parents picked up a cheap VHS copy of the original Roger Corman cult classic The Little Shop of Horrors, a grisly horror-comedy about a man-eating plant.  I instantly became a fan of this cheesy B-film and was delighted when it was adapted as a Broadway musical (which my parents took me to see in 1986), and again as an all-star film version of said musical.  The comedy elements were dialed up and the evil plant given a much more colorful personality, via a sophisticated puppet; the puppetry effects in the film version are quite amazing, even today.  Starring Rick Moranis and Ellen Greene (reprising her role from the stage version) with supporting and cameo appearances by Steve Martin, Bill Murray, John Candy, Christopher Guest, and Jim Belushi, plus the voice of Levi Stubbs (of The Four Tops), LSOH is a fun, colorful, self-aware romp with memorable musical set pieces and hooky, early 60s-influenced tunes.  For a film based on a musical based on another film, this one holds up tremendously well. 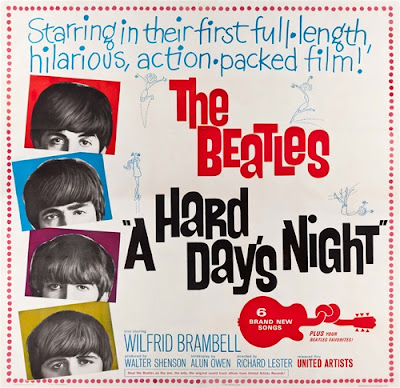 The first of two Beatles films on this list, A Hard Day's Night is generally the venerated one, a simple "day in the life" story about the world's biggest pop group that involves them traveling by train to a theater where they'll perform for a TV special.  Storyline-wise that's about all that happens.  But this film's charm is in the interaction of the four leads (plus their road managers and Paul's crotchety grandfather).  The Beatles, despite not being trained actors, were pretty natural comedians in front of the camera, particularly the witty, sarcastic John Lennon.  Directed by Richard Lester, AHDN is often revered as Britain's answer to the Marx Brothers, with zany misadventures and hilarious one-liners abound.  But the music of course takes center stage; the band released this film in tandem with their third album of the same name, and seven brand new tracks were featured.  This film was such a hit that the group and their director reunited a year later with a second (and in my opinion even better) followup. 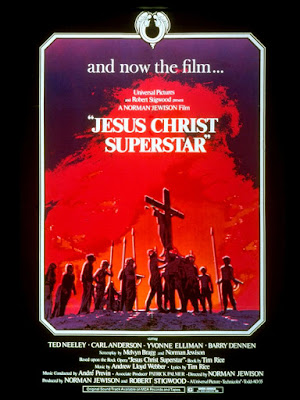 Originally written, recorded and released as a double concept album, Andrew Lloyd Webber's masterpiece was so successful that it was fleshed out into a Broadway musical/rock opera about the final days of Christ, portraying him as the world's first celebrity who has become a danger to the political and religious establishment.  Then in 1973 director Norman Jewison brought the show to the big screen, as a visually lavish but aesthetically minimalistic film shot almost entirely in the Israeli desert, where a cast of actors recreate the show with a mix of historical and contemporary elements.  The music drives the narrative, and the principle actors all deliver fantastic performances, in particular Carl Anderson in a soulful, athletic take on Judas, and Bob Bingham as the imposing, villainous Caiaphas.  This gritty, austere adaptation captures the mood of both the 1970s and the story's biblical era, achieving a strange balance between the two that works better than it has any right to.  And of course Webber's music is spectacular; perhaps the definitive example of rock opera. 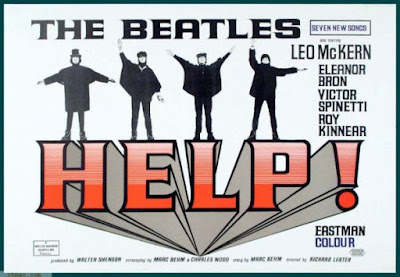 So yeah, I think I'm probably in the minority here, but I actually prefer The Beatles' second film over their first.  Where A Hard Day's Night has little going on in terms of plot, its pseudo-sequel Help! incorporates the Fab Four's wacky hijinx into a James Bond-esque plot involving a sacrificial ring that finds its way onto Ringo's finger, making him next in line to be killed by an evil cult.  This goofball story and its over-the-top trappings shouldn't succeed as well as they do, but Help! is a hysterical slapstick comedy full of great set pieces, plus it features another seven timeless compositions from John, Paul, George and Ringo.  The film is also visually beautiful, shot in lush, vibrant color that gives it an ageless look.  For my money this is the best Beatles film. 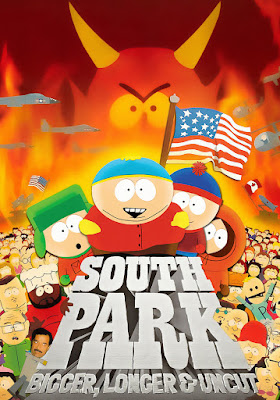 One of the few TV-to-big screen upgrades done while the show was still running on all cylinders, the South Park film incorporated all the raunchy humor of the series with the structure of a big budget movie musical.  Full of wonderfully written, brilliantly vulgar songs and (animated) show stopping numbers, Bigger, Longer & Uncut involves an escalating US-Canada conflict sparked by an offensive animated Terrence & Philip film that the four kids sneak into, leading to their nonstop swearing at school.  Kyle's mother Shiela launches an anti-Canada campaign that snowballs to the highest levels of government, and the stars of the movie are arrested and condemned to be executed.  It's then up to the kids to save them and prevent a full-scale war.  South Park creators Trey Parker and Matt Stone pull out all the stops in this film, presenting a large-scope version of the TV show that piles on the filthy comedy, pausing only to deliver spectacularly funny showtunes, including a revamped version of the series favorite "Kyle's Mom's a Bitch."  Somehow the show's creators exceeded the sky-high expectations for a film version of the era's hottest TV show, while also (sorta) elevating it into the musical theater realm. 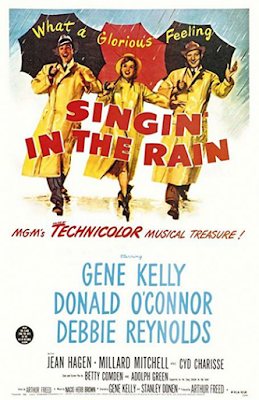 Here's a film I never thought I'd enjoy as much as I do.  The classic early 50s love letter to silent film tells the story of a trio of song & dance actors who become big Hollywood stars during the industry's transition to sound films.  For Don Lockwood (Gene Kelly) and his best friend Cosmo (a superbly funny Donald O'Connor), years of vaudville experience makes them naturals for delivering audible dialogue, but Don's female lead Lina Lamont's shrill, unpleasant voice presents a serious conundrum during the studio's first talkie production.  Don, Cosmo, and a young, talented chorus girl named Kathy (Debbie Reynolds) revamp the film into a musical, with Kathy providing Linda's overdubbed singing voice.  Singin' is a visually gorgeous film, with numerous, surrealistic set pieces and one amazingly acrobatic musical number by O'Connor called "Make 'Em Laugh" that steals the show.  Shockingly this film wasn't even nominated for Best Picture at the time, but it's become one of the most well-regarded movies in history, deservedly so. 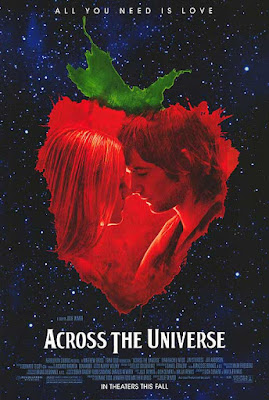 As you may have noticed, I have a weakness for The Beatles.  So when Julie Taymor released a Beatles-inspired movie musical in 2007 I was instantly reeled in.  Across the Universe essentially builds a story out of numerous classic Beatles songs, and while a few of the references are ham-handed, for the most part the narrative works, seamlessly incorporating John, Paul and George's lyrics into the story.  ATU is centered around a Liverpudlian factory worker named Jude who seeks his fortune in America, forming a bond with a college dropout named Max and his younger sister Lucy.  The three of them eventually move to Greenwich Village and get caught up in the late 60s rock n' roll/counterculture scene, making friends with a club singer named Sadie and her guitarist Jojo.  This film contains a plethora of stunningly abstract musical numbers, playing against the backdrop of the Beatles era without actually mentioning the band.  Across the Universe is what the world of the 60s would look like if the band's music itself told the story, and it's a beautiful love letter to the greatest rock n' roll group of all time. 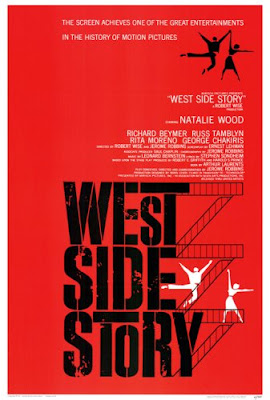 This iconic Broadway musical-turned epic film adaptation is a retelling of Romeo & Juliet, set in early 60s Manhattan and reimagined as a war between two street gangs, the NYC native Jets and the Puerto Rican transplant Sharks.  Co-directed by Robert Wise and Jerome Robbins, WSS features a lush visual style with astonishingly intricate dance numbers.  Its two leads, Natalie Wood and Richard Beymer, provide a durably likable romantic pair, but the movie is stolen by undeniably charismatic performances from George Chakiris and Rita Moreno as the leader of the Puerto Rican Sharks and his girlfriend Anita, respectively.  Other standouts include the Jets leader Riff (Russ Tamblyn) and his lieutenant Ice (Tucker Smith, who provided ADR vocals for Riff in "Jet Song").  Though replete with early 60s tropes and idioms, West Side Story is nonetheless a perennial favorite that perfectly captures its setting while offering a 20th century update of a classic tale. 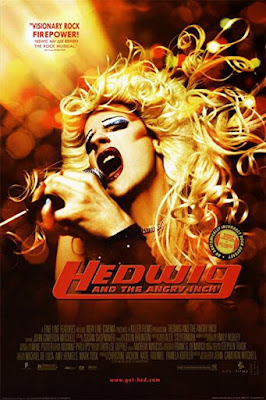 Writer-director-star John Cameron Mitchell scored an unexpected off-Broadway hit in 1998 with this gender-bending rock musical about a German transgender singer who marries an American GI to escape Communist East Berlin.   After her husband leaves her in the middle of Kansas she befriends a local teenage boy and teaches him everything she knows, only for him to steal her song ideas and become world-famous rock star Tommy Gnosis.  The stage play and film show Hedwig and her band The Angry Inch following Tommy around on tour to raise awareness of his theft of her intellectual property.  Featuring a brilliant hybrid of punk and theater music by Stephen Trask, Hedwig is an emotionally wrenching, unexpectedly relatable story of a lonely soul searching for its counterpart, directed with raw honesty and bravery by its dynamic, gifted star. 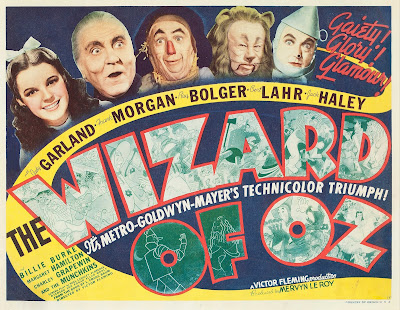 Perhaps no live-action musical will ever be as transcendent as this fantastical adaptation of the L. Frank Baum children's book.  Starring Judy Garland, Ray Bolger, Jack Haley and Bert Lahr, this universally beloved story of a young girl transported via tornado to a whimsical, far-off land was annual, network TV event viewing when I was a kid.  Nearly 90 years after its release it is still considered one of the greatest films ever made, home to easily a dozen iconic scenes and moments now ingrained in our shared cultural vernacular.  One of the first films shot in Technicolor, The Wizard of Oz depicts a startling jump from sepia-toned black & white to vivid, dazzling full color that heralds the stark distinction between Dorothy's drab Kansas farm life and the fanciful Oz.  Like the original Star Wars or half a dozen Disney cartoons, Wizard is an enchanting cultural milestone that has touched generation after generation, and will likely do so in perpetuity.

Posted by Justin Enuffa Ballard at 11:22 AM