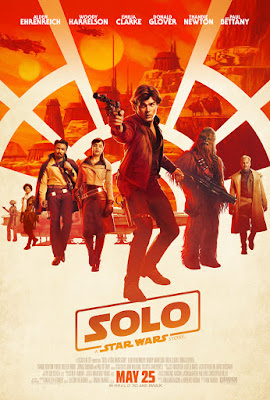 Solo: A Star Wars Story is the type of movie Rogue One really should have been - a gritty, small-scope heist film with an assortment of unseemly, well, roguish types we can't help but identify with.  Where Rogue One didn't give any of its characters an arc or relatable traits (aside from the smart-ass droid), Solo actually has colorful characters who are fun to spend a couple hours with and keeps the action sequences pretty toned down (though that Rogue One space battle is fucking awesome).  It blends elements of crime movies and Westerns to finally give us a different kind of Star Wars film (with an admittedly way-too-dark palette - sometimes it was hard to see who we were looking at).

Alden Ehrenreich stars as the young version of everyone's favorite intergalactic smuggler, in a performance that doesn't equal Harrison Ford's iconic turn (Honestly, how could it?), but captures enough of that Solo swagger and cocksuredness that we aren't distracted by the fact that it isn't Ford.  Ehrenreich is likable, smarmy and generally in way over his head, like Han Solo should be.  There were rumors of the filmmakers being unhappy with his work early on, to the point that he had to be sent to an acting coach.  I'm not sure how much of that is true, but whatever they did worked just fine.  So no complaints about the film's lead, which is half the battle in and of itself.

Solo also boasts several engaging supporting characters, including Donald Glover's much-anticipated portrayal of Lando Calrissian.  Glover does solid work here, emulating Billy Dee Williams' natural charisma and distinctive manner of speech, while dialing up Lando's more scoundrel-ish traits.  When we meet Calrissian he is a gambling aficionado who seemingly spends all his time in seedy underworld locales, loving the action at the card table.  Han and Lando immediately have an uneasy rapport, neither trusting the other in the slightest but each finding something irresistible about the other.  They don't get a ton of screen time together but the seeds are planted for their later interactions.

Chewbacca is lovable as usual, and his chemistry with Han is instantly established; right away it's clear these two are buddies for the long haul.  Chewie's introduction was handled nicely, in such a way that the two characters believably feel indebted to each other.
Emilia Clarke delivers a strong performance as Han's love interest Qi'ra, who gets separated from him at the beginning of the film and comes back into his life years later, having become the lieutenant of the film's main villain Dryden Vos (a quietly intimidating Paul Bettany).  She then becomes torn between loyalty to her old flame and fear of her boss, thus lending some tension to the second and third acts; we're never sure what she'll do.

The standout supporting performance belonged to Woody Harrelson as Han's mentor Tobias Beckett, who hires Han for a train robbery and sees something promising in the young ruffian.  The two develop a palpable friendship in spite of Beckett's "don't trust anyone" mentality, and this dynamic pays off poetically later in the film.  Harrelson improves every film he's in, and he settled into this thief-for-hire role nicely.

The only character that doesn't really work is Lando's droid L3-37, who is written as an over-the-top "droid rights" activist.  I'm not sure if this was a tongue-in-cheek attempt to troll the complainers claiming The Last Jedi was too "SJW," or to make fun of overly political people.  I'm guessing a mix of both; at one point even Lando rolls his eyes at L3's antics.  Either way it's a bit off-putting and doesn't really add anything aside from a little humor.

Solo is essentially an intimate character study with some fun action sequences, and fortunately they don't overstay their welcome.  The two major ones are the train heist and the famed Kessel Run scene, where we get to see why Han falls in love with the Millennium Falcon.  And shockingly the film's climax isn't a gigantic shoot 'em up battle but a close quarters, character-driven confrontation.

The film does contain some fan service, but it's much more subtle than the stuff in Rogue One (aside from a few hamfisted lines of dialogue like L3 saying "They don't serve our kind here," and the unnecessary explanation for Han's last name).  For the most part the "we have to include this" moments were organic to the story and felt satisfying rather than eye-rolling.  There is one third-act surprise that seems to set up another standalone film, but we'll see where that goes.

All told, Solo is a fun popcorn film with compelling characters, entertaining action sequences, a different feel than other Star Wars films, and a backstory worth telling.  It isn't perfect by any means, but I'll take a movie about characters over a movie about action any day.

Posted by Justin Enuffa Ballard at 11:25 AM