It's been a while, but welcome back to The Great PPVs, here at Enuffa.com and TheGorillaPosition.com, where I take a look back at a wrestling show that just kicked all kinds of ass and left me asking for seconds.  With New Japan's Dominion show coming up I thought I'd look back at the first Dominion show for which I was an NJPW fan, Dominion 2015! 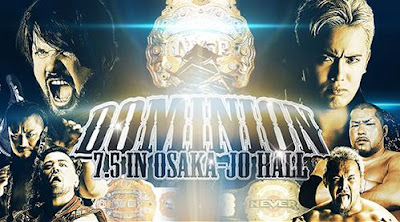 This PPV was the culmination of a year-long arc for Kazuchika Okada, who'd been unseated for the IWGP Title by AJ Styles (partly due to Bullet Club shenanigans), and spend the rest of 2014 and the first half of 2015 trying to climb back up the mountain (with a heartbreaking loss to Tanahashi at WrestleKingdom 9).  Okada's road to Dominion had been a troubled one, with a couple losses to Bad Luck Fale before a big win at Invasion Attack that put that feud to bed and set the stage for The Rainmaker to face Styles at the second-biggest show of the year.

But first the undercard...

Dominion was in my estimation the second-best PPV of 2015 behind WrestleKingdom 9.  The show's nine matches flew by, with the two headliners falling well into ****+ territory and several other bouts approaching that.  Only two matches could even be considered weak, and one of those was more of an angle than a proper match.

The show opened with a wild, fast-paced offering from the Jr. Heavyweight Tag division, as The Young Bucks defended their Titles against reDRagon and RPG Vice.  NJPW does cruiser-style action better than anyone, and these three teams got the crowd warmed up nicely, delivering a fun 14-minute sprint that ended with More Bang for Your Buck.  Very enjoyable opener. 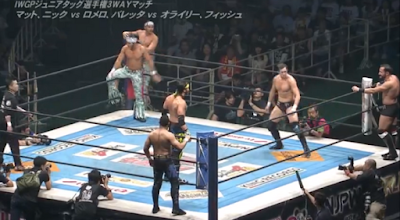 Next up was one of the weaker matches of the night; Bad Luck Fale and Yujiro Takahashi vs. Tomoaki Honma and Tetsuya Naito.  This took place during the very early stages of Naito becoming the Ingobernable we all know and love today, so if nothing else the match has some historical significance.  Naito sauntered down to the ring, in no hurry to help out his partner who was already being ambushed by the two Bullet Club members, and even refused to tag into the match until very late.  Eventually Honma got the surprise win, but Naito bailed immediately after the closing bell.  Turning the bland babyface Naito into the scoundrel he is today would of course prove to be a major box office boon for New Japan.

The really stacked portion of the card began next with the Katsuyori Shibata-Kazushi Sakuraba fight.  And I mean FIGHT.  This was one of the best simulated MMA bouts I've ever seen and I'd rank it right up there with Sakuraba-Nakamura from WK7.  The grappling looked totally convincing and snug, and Shibata's strikes were brutal.  Sakuraba dominated the match with some amazing submissions, clinging to Shibata like a spider monkey, until finally Shibata broke free (at one point reaching the ropes with his mouth, as all his limbs were unavailable) and took the match with the Penalty Kick.  This was a fascinating watch. 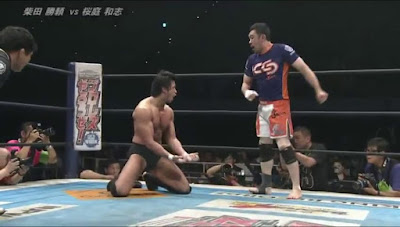 The Jr. Heavyweight match between Kenny Omega and Kushida was unexpectedly devoted to telling a story, as Omega savagely worked Kushida's knee for much of the bout and both guys worked hard to differentiate this from the spotfest style of the opening match.  This had been true for Omega's bouts in general even back then, but it was very refreshing to see Jr. Heavyweight matches being worked like main event bouts, where the high spots are carefully picked and not just thrown out willy-nilly.  Omega stuck out as a future star from the first time I saw him at WrestleKingdom, but this match really cemented him as something extraordinary while also signaling the arrival of Kushida as a major singles star.  Kushida countered a One-Winged Angel with a Hoverboard Lock at 20:44 to capture the title and become the division's new centerpiece. 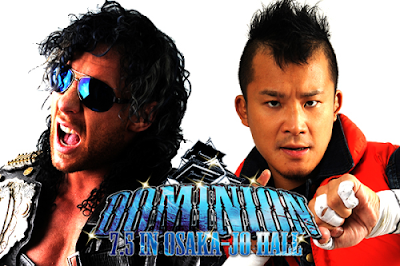 The initial trilogy of great matches finished next with Togi Makabe vs. Tomohiro Ishii for the Never Openweight Title.  While not at the same level as their previous two matches (at WrestleKingdom and Wrestling Hinokuni respectively), this was another vicious battle of the bulls.  Ishii sold a shoulder injury for a lot of this match, which may or may not have been legit (It certainly seemed like it at the time).  In the end Makabe retained after 18 minutes with the King Kong Knee to the back of Ishii's head.  I've said it before but I could watch these two beat the shit out of each other all day.

The only other low point on this show was the Tag Team Championship match.  The Kingdom vs. Anderson & Gallows felt a like a WWE midcard bout, not helped by the angle of Anderson being smitten with Maria Kanellis.  This match felt out of place on a show like this and illustrated what a shallow heavyweight tag division New Japan had at the time.  The action was passable, and Anderson & Gallows finally regained the belts after ten rather forgettable minutes.  But if this is the worst thing on the show (and it was), that's automatically a win.

The surprise hit of the night was Hiroshi Tanahashi vs. Toru Yano.  I went into this expecting more or less a throwaway, but Yano played his role brilliantly, using heel tactics to stay one step ahead of the legendary Tanahashi.  At one point Yano took the match to the floor and threw Tanahashi through one of the ringside barriers before whacking him with a chair.  Yano went back to the ring and Tanahashi just beat the 20-count, in probably the most suspenseful near-countout I've ever seen.  Tanahashi of course beat the odds to get a decisive win after 12 minutes, and this match was so much better than it even needed to be - easily one of the best Yano matches you'll ever see.

The home stretch featured a pair of superb Title matches.  Hirooki Goto's first Intercontinental Title defense against Shinsuke Nakamura easily topped their Wrestling Dontaku match - the early minutes featured slick, innovative grappling, while the later portion was full of crazy reversals and suspenseful near falls.  I actually thought Nakamura might take back the belt a few times in this match; the kickouts were that close.  Goto eventually blocked the Boma Ye and retained with the Shouten, capping off a brilliant 23-minute wrestling match.  It was thought at the time that Goto was being positioned as the new Intercontinental custodian while Nak would move up and challenge for the Heavyweight Title, but Nak ended up regaining this belt a few months later.  Goto of course became the new face of the NEVER Openweight division instead.  Regardless, on any other show this would be an easy Match of the Night.  But we weren't done. 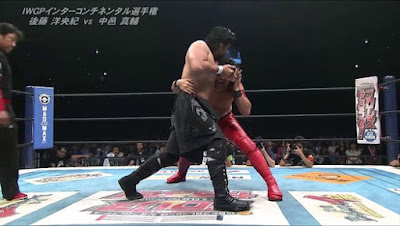 The IWGP Championship main event showed AJ Styles and Kazuchika Okada as absolute masters of their craft.  Styles had the entire Bullet Club supporting him at ringside, and they figured heavily in the first ten minutes, interfering at every opportunity before the referee ejected them (complete with a "suck it" crotch chop).  After that the match settled into a wonderful example of Styles-Okada storytelling.  Both guys threw every one of their signature moves at each other, and the match culminated in one of the most amazing closing stretches I've ever seen.  The counters and reversals on display were truly incredible.  After twenty-six minutes Okada finally nailed The Rainmaker clothesline (the second of the match) to regain the World Title and pay off one of the more emotional Championship quests in recent years.  This was inarguably a Match of the Year contender and in my opinion the best match AJ and Okada had together.  Just stupendous.

Dominion 2015 was an exemplary night of wrestling and delivered in a way WWE couldn't and can't touch.  Like WrestleKingdom 9, it presented a variety of excellent bouts and cemented the prioritization of my New Japan fandom.  Coming out of this show I was fully an NJPW fan first and everything else second.  Go back and give it a watch at NJPWWorld.com.


Posted by Justin Enuffa Ballard at 10:48 AM