WWE Money in the Bank 2018: The Night Asuka Became Stupid

Alright look, can someone answer me this question?  Does Vince McMahon have some kind of genetic commitment to including at least one infuriatingly baffling booking decision on every single PPV?  Money in the Bank 2018 was, overall, a decent show.  It was about an hour too long, with a few matches that belonged nowhere near a live audience, but it wasn't a bad show by any means. 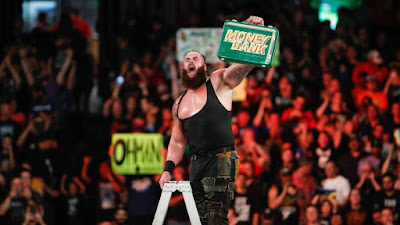 But everything good about it was overshadowed for me by one of the stupidest finishes maybe ever, when Asuka, moments away from beating Carmella for the Smackdown Women's Title, got distracted like a cat confronted with a dangly object, because someone dressed in her ring entrance gear (quite obviously a man judging by this person's meaty hands) got up on the ring apron and stood there.  Asuka reacted as though a demon from her past showed up to collect a debt, so I thought maybe they were doing some kinda character building with her, like when Christian first showed up during Edge's matches.  But no, it was just James Ellsworth under there.  He unmasked and Asuka was still frozen in place, despite already kicking out of a Carmella roll-up.  One superkick later and Carmella pins Asuka to retain.  How fucking dumb are we expected to believe Asuka is?  How dumb does WWE think we are for being expected to accept a finish like this?

1. Did Carmella and Ellsworth plan this ahead of time?  If so, why didn't Ellsworth show up one of the half-dozen other times Carmella was in serious trouble?

2. Did Ellsworth know the appearance of some stranger in an Asuka mask would halt Asuka dead in her tracks, or was that just a lucky break?

3. If it's the latter, what did he think was gonna happen?  What if Asuka just said "Oh, that's weird," and proceeded to kick a rain check into Carmella before pinning her?

There is nothing more deadly to a babyface character than booking them like an idiot.  No one wants to cheer for an easily duped shmuck.  So congratulations Vince, you've once again taken someone Triple H spent a lot of time and money building up in NXT and made them not special.  Between her premature first loss at 'Mania and now being made to look like a complete fool (after the inexcusible indignity of having to struggle against Carmella of all people), Asuka is just one of the girls now.  Fuck you. 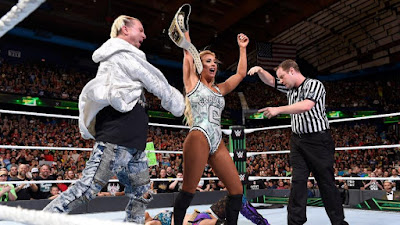 I shouldn't have to get angry about this stuff.  No one with even a minimal understanding of how to put together a pro wrestling show would even CONSIDER booking a hot babyface star like this.  Please Hunter, please please please take control of this company, by force if you have to.  Vince McMahon should not be allowed to make any further creative decisions, ever.

1/2* for this match, by the way.  Asuka should be mortified to have this on her resume.

Alright, now that this horseshit is outta the way, let's talk the rest of the show.  There was a running theme through almost every singles match, by the way - accomplished wrestler vs. hack that Vince likes.  This show had five examples of it.  Christ....

To kick things off we got an unwanted Daniel Bryan-Cass rematch, but ya know what, this was pretty good.  Cass is still green as astroturf and can't at all be left to his own devices when on offense, but he broke out a couple real moves and Bryan was able to guide him through a perfectly solid opener.  I liked that Bryan brought back the heel hook as a finisher (is he grooming himself for a future match with Zack Sabre?) and I'm very glad I was wrong about Cass winning.  Now Bryan needs a real feud with someone who can give him some great matches.  *** 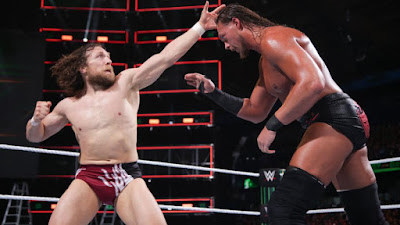 Next was a complete nothing match that made Sami Zayn look like a supreme geek.  This company's treatment of Sami is pretty indefensible.  Is he a breakout box office star, no.  But does he deserve better than being squashed by a non-factor like Lashley?  Uhh, yeah.  Lashley showed me zero in this match.  A fallaway slam, three delayed vertical suplexes which he struggled with (He needs to stop doing that move before he kills someone - just ask Cass.), and a couple Argentine backbreakers.  What happened to the Dominator he used to do?  This match sucked.  1/2*

One of the surprisingly good matches was Seth Rollins vs. Elias - I guess I shouldn't be that surprised considering how good Seth is (Can we just make Seth the new top guy?).  Elias looked better here than he has previously, which isn't saying much but it's something.  This was a solid back-and-forth match that ended with Seth (who was selling a tweaked knee) reversing a roll-up and hooking the tights for the cheap win.  Glad his I-C reign will continue.  ***

The women's Money in the Bank was next, and had a pretty frenetic pace with mostly good action, a few miscues aside.  Everyone worked hard and took some good bumps (Sasha taking a cross-body from Ember onto a ladder looked excruciating), and the bout had a ton of false finishes toward the end.  Eventually Becky Lynch appeared to have it won until Alexa Bliss (seemingly a bit late on her cue) tipped the ladder over and climbed it to steal the briefcase.  Kind of a safe choice to win this match but I was alright with it, especially considering how it played out later.  Overall a vast improvement over last year's women's match.  ***1/2 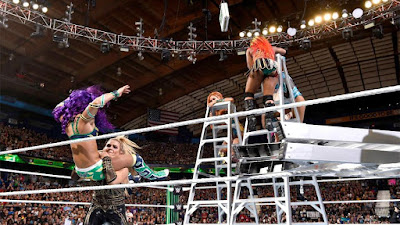 I'm torn on Worst Match of the Night honors - was it Asuka-Carmella, Lashley-Zayn or Roman-Jinder?  In terms of the actual work I'd probably go with the Lashley bout, but considering how disinterested the crowd was in watching two of Vince's pet projects slog through a boring house show match, I might have appoint this one.  Either Roman and Jinder were too scared to go off-script and actually try to win over the audience or they were completely tone-deaf about how they were reacting.  This is the third Roman Reigns PPV match the where audience has actively checked out.  Face it Vince - Roman Reigns is not your guy, period.  It's never going to happen.  Having Reigns spend 80% of the match selling Jinder's powderpuff offense isn't making anyone feel sorry for him.  The only thing that might've gotten Reigns over here would be to have him absolutely kill Jinder.  But no, we were subjected to 15 minutes of headlocks punctuated by two or three real moves (to Jinder's credit he did add a nice gutbuster-type move to his arsenal).  Mercifully the match ended with the usual Superman punch/Spear combo and the crowd erupted in apathy.  *

Match of the Night was probably AJ Styles vs. Shinsuke Nakamura, but even that was hobbled by the worst gimmick match stip, Last Man Standing, where after nearly every goddamn move the referee started a ten-count.  Hey Chioda, take it down a notch.  Seriously, if I were either of these guys I would've made it a point not to get knocked off my feet whenever possible - it would've been a nice take on this gimmick match too, both guys being too proud to get knocked down.  This suckfest of a stipulation came dangerously close to ruining a good match, and unnecessarily extended it a good 7 minutes.  The match took a long time to get going but the second half was very good, with enough cool spots and drama to make it a success.  Still, these two haven't come close to what they did at WrestleKingdom 10; WWE is apparently incapable of just getting out of the way of these guys and letting them tear the house down.  AJ retained, which I hope means he's moving on to Samoa Joe.  Nak hopefully gets a feud with Daniel Bryan so they can both check that off their bucket lists.  But congratulations WWE on snatching a lackluster feud from the jaws of what should've been a slam dunk.  ***3/4 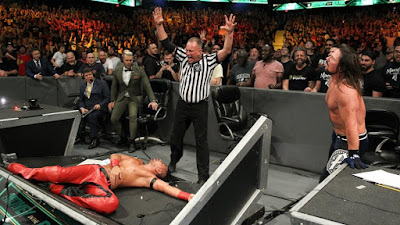 The shocker of the night was Nia Jax vs. Ronda Rousey.  This was so much better than anyone expected.  Nia looked like a brutal monster, while Ronda (who demonstrated unequivocally what a natural she is in a wrestling ring) emoted beautifully as an underdog babyface and gutted out a near-victory before Alexa crashed the party.  As I figured, Ronda had this match won when Alexa smashed her with the briefcase and cashed in on Nia to reclaim the title.  Considering how not over Nia was as a babyface champion I'm okay with this, and it was way too soon to give Ronda the belt.  This protected Ronda while still getting the belt off Nia.  Now there are multiple matchups available for all three; Nia is guarateed a rematch but Ronda never lost either.  As I said, Ronda looked great here and this may have been Nia's best match thus far.  ***1/2 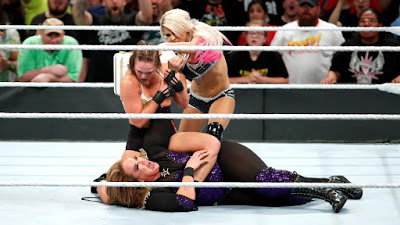 The men's MITB match was fine.  I probably would've liked it more if this show hadn't run four-and-a-half hours, but it had some fun spots, like Braun Strowman tossing Kevin Owens off a ladder through the entrance tables, Rusev doing a triple Accolade, and Finn Balor nailing the Coup de Grace off a ladder.  Aside from that there wasn't anything that stood out much from other MITB matches, but it was a solid main event.  I'm burned out on these multi-man ladder matches, as I've said before.  There's only so much you can do with them and this concept.  Strowman as the briefcase holder should at least be something different.  I would have him call his shot well ahead of time.  Like go on RAW tonight and announce he's cashing in on Brock at SummerSlam.  Done and done.  ***1/2 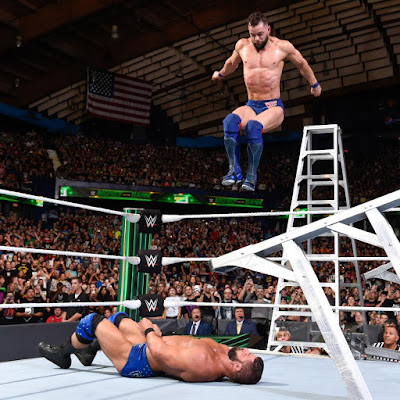 So yeah, Money in the Bank was overall a solid show with two decent ladder matches, a very good but overlong WWE Title match, a shockingly good Ronda match, and some other okay stuff.  Unfortunately it also had two awful bouts and another that was unforgivable.  Stop treating your audience (and your talent) like they're idiots.

Best Match: AJ Styles vs. Shinsuke Nakamura
Worst Match: On balance I'd say Roman Reigns vs. Jinder Mahal, but the Asuka finish was so terrible I gotta go with that.
What I'd Change: How 'bout ya just give Asuka the fucking belt and let her do what she does?
Most Disappointing Match: Carmella vs. Asuka for the stupid goddamn ending.
Most Pleasant Surprise: Nia Jax vs. Ronda Rousey
Overall Rating: 7/10

Posted by Justin Enuffa Ballard at 11:38 AM