Bob Dylan's Blood on the Tracks is an album I was very late to discovering.  I didn't get into Dylan at all until 2008, and initially I busied myself with his 1960s output, particularly his landmark trilogy of Bringing It All Back Home, Highway 61 Revisited, and Blonde on Blonde.  I developed an appreciation for those albums (and some of his early all-acoustic stuff), but none of them quite landed for me as "essential" records.  It wasn't until a year later when I finally gave Blood a listen, and had finally found a true favorite Dylan album.  Here was an emotionally raw, melancholy, atmospheric album that conveyed a sense of grounded maturity Dylan's "rock star" releases of the 60s lacked. 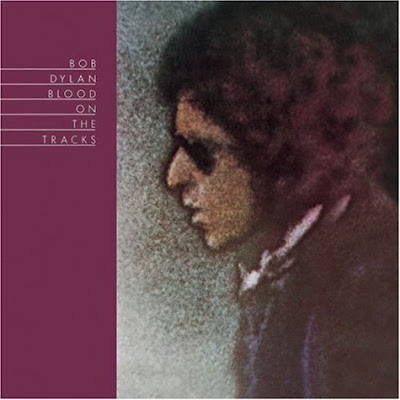 Blood on the Tracks was written and recorded while Dylan was going through a separation from his wife Sara, and while he's denied it repeatedly, the lyrics feel like a cathartic purging of his personal woes.  Nearly every song deals with themes of love, loss, regret, and emotional pain.  If Dylan wasn't directly writing about his disintegrating marriage, it certainly feels like that situation at least shaped his creative process (How could it not?).  The title seems a metaphor for how much of himself he poured into these recordings.  Blood on the Tracks indeed.

Originally nearly every song was recorded in New York as a stripped-down acoustic performance, until Dylan's brother David convinced him to re-record half of them with a full band in Minneapolis, in order to give the album's sound more variety.  The new song versions were hastily recorded only three weeks before the album's release.

The album's tone is set by the bouncy but lyrically forlorn opener "Tangled Up in Blue," where the narrator reconnects with an old flame after many years and realizes he could've made things work with her.  "We always did feel the same/We just saw it from a different point of view..."

The first of the subdued, pensive New York recordings is "Simple Twist of Fate," a somber lament about a failed relationship that begins promisingly but ends with the woman abruptly leaving and the narrator wandering around hoping to find her again.  "Hunts her down by the waterfront docks where the sailors all come in/Maybe she'll pick him out again/How long must he wait..."

The next few songs all continue the album's lovelorn theme; the solemn "You're a Big Girl Now" contains regretful language such as "What a shame if all we've shared can't last" and "Pain that stops and starts like a corkscrew to my heart;" the oddly playful, 8-minute tirade "Idiot Wind" sprinkles fiction into the story but is ultimately summed up with lines like "I kissed goodbye the howling beast on the borderline which separated you from me;" and the plainly titled "You're Gonna Make Me Lonesome When You Go" seems to suggest a romance the narrator thinks too good to be true, as he's waiting for the other shoe to drop ("Can't remember what I was thinking of/You're gonna spoil me too much love/You're gonna make me lonesome when you go").

The relaxed shuffle of "Meet Me in the Morning" betrays its wholly pessimistic lyrical content; Dylan speaks in the simplest terms possible over a blues form, ruminating on a post-relationship breakdown - "Every day's been darkness since you've been gone," "Look at the sun sinking like a ship/Ain't that just like my heart babe/When you kissed my lips?"  This song might capture his mindset more completely and succinctly than anything else on the album.

The one misstep on the record for me, and a song that feels very out of place, is the 9-minute "Lily, Rosemary & The Jack of Hearts."  This is one of Dylan's "story" songs that describes a bank heist, a love quadrangle, and a murder.  On another album this might have fit in better, but its impish tone and extraneous subject matter seems to interrupt the mood of the otherwise laser-focused record.  It's not a bad song by any means, it just seems like it doesn't belong here.

The last three songs return to both the matter at hand, and the crystalline acoustic production of the New York sessions.  "If You See Her Say Hello" is probably the most mournful track on the album, with the narrator passing on a cordial but deeply woeful message to his former lover, while leaving the door open for a reconciliation he knows probably won't happen - "If she's passing back this way I'm not that hard to find/Tell her she can look me up if she's got the time..."

Probably my favorite song on the album is the strangely serene "Shelter from the Storm," which seems to recount the beginning of the relationship and how unassumingly it began.  Halfway through the topic shifts back to its evaporation, but in a way that suggests he's at peace with how things ended - "Beauty walks a razor's edge, someday I'll make it mine."  This is one of those simply constructed songs consisting of a series of short stanzas, that somehow never gets old.  It works better than it has any right to, and it's one of my favorite Dylan songs of all.

Concluding the album on a mildly hopeful note is the short, sparse "Buckets of Rain," whose lyrics suggest Dylan has accepted the situation and is now ready to move on.  There's still that hint of regret, but ultimately an air of "It is what it is."  Life is a series of personal encounters, people come and go, just "keep on keeping on," as Dylan says in the first song.  "Friends will arrive, friends will disappear," "All you can do is do what you must/You do what you must do and you do it well."  What a fitting end to this therapeutic account of a decaying marriage, and a perfect summation of Dylan's emotional state in the end.

Put very simply, Blood on the Tracks is Bob Dylan's masterpiece.  No other album in his remarkable body of work captures such mood, world-weariness, or expressive resonance like this one.  Whether he owns up to it or not, this is one of the greatest "break-up" albums ever recorded, presented with such wisdom and sophistication that it can be universally appreciated by anyone who's ever been in a relationship.  This document of a broken marriage is one of the essential albums for any collection.