Pearls Before Swine: Why Daniel Bryan Needs to Leave WWE

Over the past couple months, one thing has become very clear to me: Daniel Bryan needs to leave WWE.  After his miraculous return to in-ring action I gave WWE the benefit of the doubt, that they'd learned from their short-sighted, spiteful booking of Bryan from his previous run.  But no, they've apparently learned squat (as usual; look who's in charge). 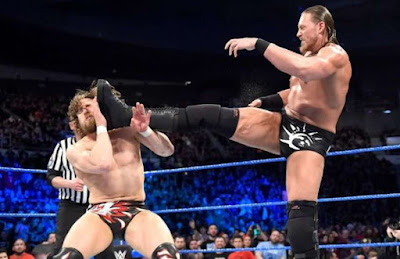 To the delight of fans everywhere, Bryan managed to overcome his previously career-shortening concussion issues to return to the ring, and is featured on the same roster as AJ Styles, Samoa Joe, Shinsuke Nakamura, and The Miz, with whom he has a built-in feud stemming from his time as Smackdown GM.  Given that Bryan's WWE contract expires in September, you'd think the company would want to make the idea of his re-signing as attractive as possible by throwing him some quality PPV opponents and presenting him as a major upper-card attraction.  But thus far who have they given him to work with?

After his return match at WrestleMania (which they booked in such a way that he missed the first half of the match due to an attack by Owens and Zayn), Bryan got saddled with trying to make chicken salad out of the inept (but tall, so "future star") Big Cass.  This feud lasted two months and Cass was fired immediately afterward, and the two matches were mediocre at best.  Great use of one of your top stars, guys.  Now they've teased the long-awaited Bryan-Miz match finally happening but instead just reunited Bryan with Kane to go after the Tag Team Titles.  Is this 2012?  Isn't Bryan above this now?  And why would he trust Kane, the last guy he feuded with prior to his 2014 injury?  This feels like an orchestrated attempt to once again cool off the most popular guy in the company, when they should be getting the best possible match combinations out of him while they still can.

I've seen the argument that "Well, Bryan hasn't signed a new deal so why would they put the title on him?"  He doesn't need to win the WWE Title.  I don't care if he never wins it again.  Shawn Michaels didn't win any singles championships from 2002 till his 2010 retirement.  But what they should be doing, as they did with Shawn, is matching him up with guys with whom he can consistently steal the show, the AJs and Samoa Joes (and for fuck's sake Nakamura), while he's still around.  If he re-signs after that, great, put the belt on him for a while if you want.  But the way they've been using him is akin to Shawn feuding with lumps like Chris Masters (which actually happened, and how'd that work out in getting Masters over?).  A feud with Cass and a Team Hell No reunion are beneath him at this point.  It's like the company doesn't want him delivering Match of the Year candidates because then they'll have to admit to themselves that they need him.

It's time for Bryan to move on.  There are literally half a dozen career highlight matchups waiting for him in New Japan.  Imagine Bryan participating in next year's G1 tournament.  Bryan vs. Okada, Bryan vs. Omega, Bryan vs. Naito, Bryan vs. Sabre, and on and on.  Daniel Bryan in WWE in 2018 is pearls before swine. 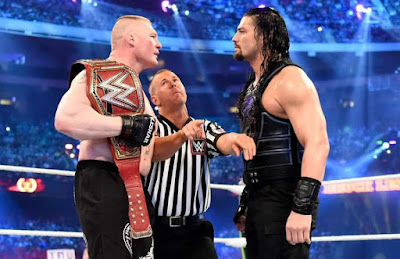 In other news, it looks like Vince is AGAIN trying to make anyone give a shit about Roman Reigns.  After jobbing Reigns to Brock three consecutive times (four if you count last year's SummerSlam main event), Vince still thinks the fans will rally to Roman's side if Brock is presented as a guy who can't even be bothered to sign a fight contract.  If Brock no-showing RAW leading to WrestleMania didn't work, why in the fuck would this?  No one cares if Brock isn't around - he hasn't been around most of the time since he came back six years ago.  All this approach has done is get Brock LESS over, thanks to them constantly pointing out that he's only in it for the money.  And it doesn't help Reigns when you mention how many times he's failed to beat the guy who's only in it for the money.  Who is this feud designed to help at this point?  Remember how the entire New Orleans crowd shit all over the WrestleMania main event?  Does Vince seriously think a New York City crowd is gonna be gentler?  Brock-Roman IV might actually prompt rampant walkouts like Roman-Joe did, and really WWE deserves it now.  WWE clearly doesn't care if the fans are enjoying what they've already paid to see, so the only course of action is to embarrass them by turning the SummerSlam main event into an empty arena match.

There is no sensible argument right now for continuing to push Roman as the top babyface.  It's no longer a case of "At least he gets a reaction."  He's not just getting booed these days, audiences are actively sabotaging his matches.  When people are walking out or chanting "CM Punk" and "Let's go beach balls," they aren't paying attention to Roman and his opponent.  They've checked out.  That is precisely the opposite reaction you want for your top hero.  This experiment is over.  Time to move on.  Put Strowman or Rollins against Brock at SummerSlam.  Both of them are infinitely more over than Roman is, and a win over Lesnar would boost them huge.  Booking Brock vs. Roman IV in New York is beyond idiotic and will most certainly backfire.