NXT's latest TakeOver special, simply entitled Chicago II, featured five matches of the good-to-excellent variety and was headlined by an epic grudge rematch.  Gargano vs. Ciampa is the most personal NXT feud since Owens vs. Zayn, and these two have been stellar in conveying the pure good vs. evil nature of their rivalry.  The undercard featured all three titles being defended, plus a pretty great little athletic showcase between Ricochet and Velveteen Dream.  So let's get into it. 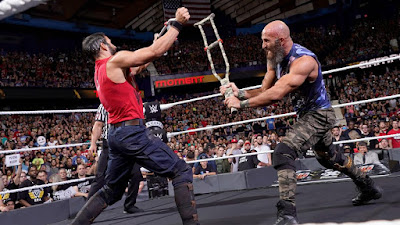 The show opened with The Undisputed Era (I still hate that name) vs. Oney Lorcan (and that one) & Danny Burch for the NXT Tag belts.  These teams pulled out every stop they could find, as though they were desperately trying to steal the show.  The last third got perhaps a little overindulgent with the false finishes, but this was still a helluva good tag title match.  Roderick Strong in particular looked great, and the challenging team were made to look incredibly resilient, despite not much experience together.  A damn fine opener.  ***3/4 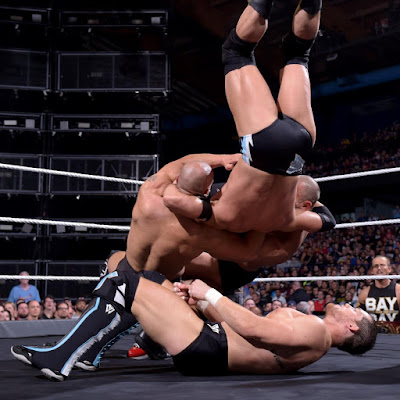 The second bout came very close to actually stealing the show.  Ricochet and Velveteen Dream felt like a main event in itself, starting out pretty methodically but gradually ramping up the action like crazy.  At one point Ricochet got suplexed from the apron to the floor, which looked positively brutal.  Velveteen's motivation was that Ric stole his thunder as the promotion's new aerial wizard.  The last few minutes were super dramatic and Ric got the duke with the 630 splash, a move I still can't believe is humanly possible.  **** 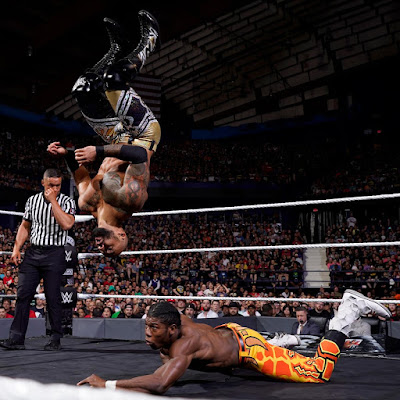 As I expected, the Women's Title match Shayna Baszler vs. Nikki Cross, resembled Shamrock vs. Mankind from twenty years ago, with Cross being the one person not fazed by Baszler's super scary aura.  Cross played the wacko who's so nuts she actually seems to enjoy the punishment.  Action-wise this wasn't amazing but their respective characters came across nicely.  I liked how Nikki refused to tap out to the choke and actually smiled before passing out, satisfied that Baszler never got her to quit.  **3/4 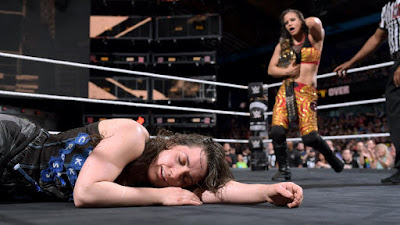 The NXT Title match of Aleister Black vs. Lars Sullivan had an old-school babyface vs. monster heel vibe.  Sullivan is a throwback to hideous 1960s wrestling heels like The French Angel and Ox Baker.  His proportions are freakishly huge, like someone made a Create-A-Wrestler and dialed up every body part to 100%.  And he's legitimately scary-looking enough that his basic moveset is adequate to get the point across.  He could still use a few more signature moves, but this guy has some potential, in a way Vince pet projects like Gene Snitsky and John Heidenreich didn't.  Black spent much of the match on the defensive, trying to hit Black Mass, and finally did so toward the end (the first kick missed badly), pinning Sullivan after the third instance.  A pretty good title match to kick off Black's run.  *** 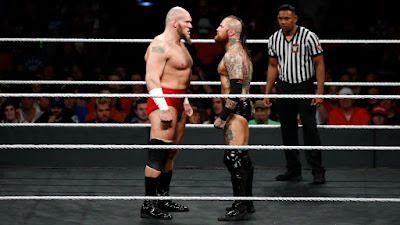 The main event was once again Johnny Gargano vs. Tomasso Ciampa.  For me this was a big step up from their first match, which to me felt artificially long.  At 35 minutes this bout felt organically epic, with both guys playing up the drama and brutality, and executing a few cringe-inducing spots.  The violent, old-school brawling reached a fever pitch late in the match when Ciampa attempted to put Gargano through a table from one of the big equipment cases near the entrance, but Gargano countered with a White Noise through the table.  This looked like it absolutely killed Ciampa, with the table barely breaking their fall.  Medical staff then strapped Ciampa to a gurney while Gargano looked on in a trance.  Gargano then snapped to his senses and continued the attack, handcuffing Ciampa and locking in Gargano Escape, but the referee had been knocked down.  As officials tried to restrain Gargano again, Ciampa DDT'd him on the exposed ring boards for the sudden win.  Both guys brought their A-game here while also hammering home their respective heartbreak at having to brutalize their former best friend.  A pretty excellent main event, and an improvement over their New Orleans match.  ****1/4 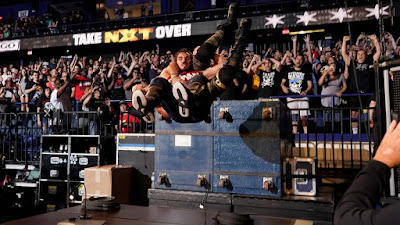 As always NXT delivered a very good TakeOver special, one that was head and shoulders better than the main roster counterpart.  This show had a variety of match types and culminated with an epic, emotional fight.  The only weak spots, if you can call them that, were the two singles title matches, neither of which was bad.  Hard to find much to complain about on this show.

Best Match: Johnny Gargano vs. Tomasso Ciampa
Worst Match: Shayna Baszler vs. Nikki Cross, but again it was perfectly fine
What I'd Change: Not a whole lot.
Most Disappointing Match: I guess the women's match since it was so short
Most Pleasant Surprise: How much of a semi-main event Ricochet-Dream turned out to be
Overall Rating: 9/10


Posted by Justin Enuffa Ballard at 9:17 AM