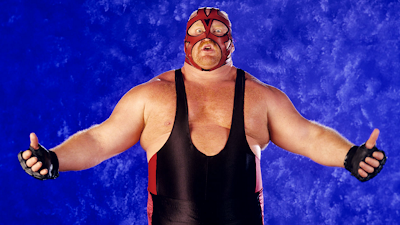 I first became aware of Big Van Vader in 1990 when he debuted on WCW television.  With his "cyborg elephant" helmet that could shoot steam all by itself and his weird jockstrap-esque mask, Vader had one of the stranger appearances I'd ever seen.  At the time I figured he was just another gimmicky monster heel who wouldn't last.  Fast-forward two years and he had dethroned Sting to win the WCW Title, trading wins and losses in some of the best matches of the year.  For my money Sting was Vader's greatest opponent due to his mix of power and athleticism; Sting could take Vader's pummeling and dish it right back.  Vader dominated the promotion for the next three years, feuding with Sting, Cactus Jack, and Ron Simmons, and maintaining his standing as the company's most fearsome villain.  Sadly a feud with Hulk Hogan damaged his credibility somewhat, and he jumped to the WWF in early 1996, where he was immediately pushed as a killing machine.

Vader made a splash in the Royal Rumble that year, eliminating a few opponents and clashing with the WWF's resident monster heel Yokozuna.  This Battle of the Bulls kept Vader occupied through the winter/spring months, and Vader more or less took over Yoko's spot in the company, aligning himself with Jim Cornette, Owen Hart and Davey Boy Smith.  These three were the company's top heels through the summer, and their feud with Shawn Michaels and friends climaxed at SummerSlam with a stellar WWF Title match.

Vader and Shawn put together a fascinating big man-little man war, where Shawn managed to stay a step ahead for much of the bout but eventually felt the brunt of Vader's punishing offense.  Shawn took a countout loss before Cornette goaded him into restarting the match, followed by a disqualification and another restart.  In the end Shawn pinned Vader, but the 400-pounder looked dominant in defeat.  Backstage politics prevented the planned Surivor Series rematch, but Vader was back in the title picture in mid-1997, this time feuding with The Undertaker.  Alas, WWF gold eluded him throughout his tenure there, but for two years he was one of the company's best heels.

I've long considered Vader the greatest superheavyweight in wrestling history.  At roughly 400 pounds the man could move like someone half his size and deliver excellent matches like no one else in his weight class.  Vader balanced brutal power moves like his thundering powerbomb and stiff forearm strikes with one of the most impressive moonsaults this side of Keiji Mutoh.  Anytime our heroes got in the ring with Vader, we legitimately feared for their safety.

Anyone who hasn't seen Vader's work should check out the following:


That'll give you a pretty good idea about what a unique and special talent the man was.  If anyone has recommendations for some of his work in Japan, comment below.

RIP Leon White - you will never be forgotten.