Dude.  Holy actual fucking shit.  If Okada-Omega IV wasn't the greatest match of all time, I dunno what is.  I went into this saying "Well, they're gonna try to top everything they've done before, and if two guys could do it, it's Okada and Omega.  But let's be realistic, it'll probably be their second or third-best match.  And that's good enough."  But no, they actually fucking topped everything they've ever done before.  If there had previously been a case to be made against Kazuchika Okada and Kenny Omega being the two absolute best wrestlers in the world (and really, there wasn't), there definitely isn't now.  These guys set an impossibly high bar for themselves at WrestleKingdom 11 and somehow managed to clear it at Dominion 2018.  This main event was about as perfect a match as I've ever seen. 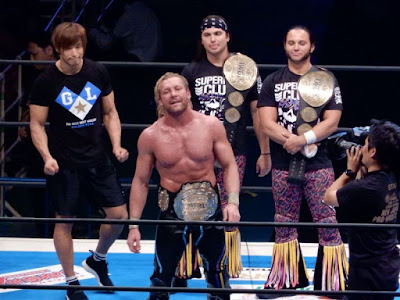 But first let's talk about the rest of the show.  Even if the undercard of this PPV had sucked, the main event was so incredible it's an 8/10 show for that alone.  But fortunately the undercard did not suck at all.

The opener was a short but entertaining Jr. Tag Title match, with Roppongi 3K challenging El Desperado & Kanemaru, hoping to regain the straps.  The heels took advantage of a slight ref bump and Kanemaru used a whiskey bottle on SHO for the win.  Very odd choice keeping the belts on SZGN here but I imagine RPG3K will get them back sooner or later.  Nothing spectacular in this opener, it was fine.  **

Next up was Jay White & Yoshi-Hashi vs. Juice Robinson & David Finlay in another short bout.  This was all about setting up White vs. Robinson, which it did nicely.  Robinson got the pin on White with Pulp Friction, and these two will face off for the US Title at the G1 Special.  Just a quick 7-minute match.  **

A third undercard tag match pitted Tomohiro Ishii & Toru Yano against Minoru Suzuki & Zack Sabre Jr.  This was the best of the three openers, mostly due to the Ishii-Suzuki interaction (a big singles match is upcoming and should be glorious).  Sabre got the win for his team by tapping out Yano, but after the match Ishii and Suzuki brawled into the back.  Another fun little match.  **1/4

The first really noteworthy bout was the NEVER Openweight triple threat.  Hirooki Goto and Michael Elgin carried most of the weight here while Taichi played the chickenshit heel who picked his spots and tried to stay out of danger.  After some nice three-way spots and some good powerbrokering from Goto and Elgin, Elgin won by buckle bombing Taichi into Goto and then Elgin bombing Taichi for the pin.  Elgin vs. Goto is already announced for Kizuna Road, so that should be a helluva fight.  This match wasn't your usual NEVER slugfest but had some clever spots and was well worked.  ***1/2

Here's where the show really started to take off.  The Young Bucks, freshly moved up to the heavyweight tag division, challenged Evil & Sanada in an energetic, dramatic bout where both Bucks sold injuries - Matt's back became an issue again, and Nick missed a kick on the apron and whacked his foot on the post.  Both injuries played into multiple spots and the Bucks were in peril for much of the bout.  Matt and Nick Jackson have successfully transitioned from spotfest wrestlers to really great storytellers, and this match felt different than their Jr. division stuff.  I'm really excited to see how the heavyweight class looks with them in the mix.  After multiple exciting false finishes, the Bucks took the match and the straps with More Bang for Your Buck.  One of the best heavyweight tag title matches I've seen in NJPW.  **** 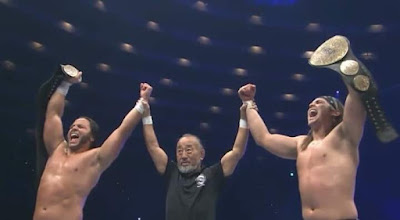 The special attraction match was next as Hiroshi Tanahashi, Jushin Thunder Liger and Rey Mysterio teamed up against Cody, Hangman Page and Marty Scurll.  This was a fast-paced, fun encounter, with Rey and Scurll doing some nice Jr. spots and Cody further establishing his dominance as a budding main event heel.  I should've seen it coming that Liger would take the pin here - Cody recovered from a hurricanrana and nailed CrossRhodes for the win.  Nothing epic here, just a romp of a six-man tag.  ***

The final trilogy of bouts, as often happens with NJPW shows, is what Dominion will be remembered for.  Will Ospreay defended the Jr. Title against Hiromu Takahashi in a pretty fantastic 20-minute match that had the requisite high spots but made use of them when they really meant something.  Both guys took a cringe-inducing bump or two (I'm convinced Ospreay doesn't want to see 40) but there wasn't anything as worrying as Ospreay's near-death Spanish fly spot against Scurll.  Ospreay at one point countered a triangle hold with a twisting powerbomb move that looked like it legit murdered Takahashi, and later Takahashi hit a butterfly piledriver (This has to be the most dangerous variation).  The match ended after a corner suplex followed by a Time Bomb.  One year after dropping the belt to Kushida, Takahashi is once again the Jr. Heavyweight Champion.  A crisply worked, excellent tertiary main event.  ****1/2 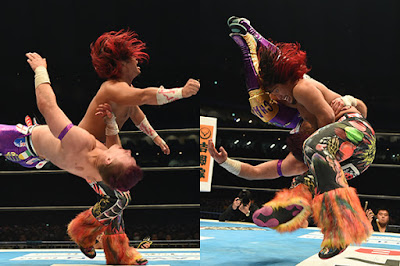 The semi-main slot of course went to Jericho vs. Naito, in a brutal fight where it legit looked like these guys wanted to kill each other.  Jericho attacked Naito before the bell, put him through one table and DDT'd him onto another (Naito got spiked right on his head and it looked absolutely vicious), and generally beat the piss out of him for a good 7 minutes outside the ring.  Finally the action moved inside and the match started for real.  Jericho dominated the first third, taking his time and enjoying picking apart the Intercontinental Champ.  Finally Naito made a comeback, oddly drawing some boos from the crowd when he fought Jericho's heel tactics with his own.  There was one missed spot where Naito went for Destino and Jericho didn't quite catch him right, but they recovered quickly and moved on like pros.  Naito later hit Destino but Jericho got his hand on the ropes, used the ref to block a second Destino attempt, and hit a low blow and a Codebreaker to get the upset title win.  With that, Chris Jericho is the first man to win both versions of the Intercontinental Title.  Not sure where they'll go with this - I would've expected a rematch at the G1 Special but Naito is already booked in a tag match.  Maybe we'll see Jericho vs. Evil, since Evil saved Naito from Jericho's post-match attack.  Jericho's taken his heel persona to a new place in NJPW, adopting a Terry Funk-esque, chaotic attitude (with a little of the Joker thrown in?) where you literally don't know what he'll do next.  This style works great for him at this age since he doesn't have the agility of his 20s and 30s.  The match wasn't at the same level as Jericho-Omega, but for a wild, anarchic brawl this was fine stuff.  **** 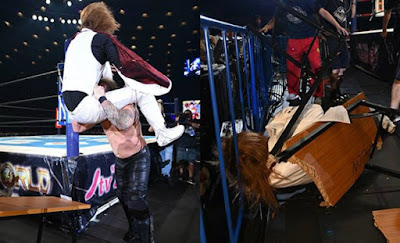 Alright, now for that goddamn main event.  This match went 69 minutes if you include the two rest periods between falls, and it flew by in a way I've never felt an hour fly by in a wrestling match.  Even the best Royal Rumbles don't feel this quick.  The first fall lasted roughly 28 minutes, and with every five-minute interval announcement I said, to no one, "Wait, seriously?  It's been 20 minutes already??"  Okada and Omega picked up right where they left off in the G1, cutting a wildly fast pace considering how long they had to go.  This first fall was action and drama-packed, with the wrestling spilling to the outside numerous times (At one point Omega hit a crossbody off the top rope over the barricade, and at another point Omega got knocked off the apron and crashed ribs-first into the railing), and both men hitting most of their signature moves (At one point I said, to no one, "What are these guys gonna have left for the second and third falls??").  Late in the fall Okada hit a dropkick off the top rope that sent Omega careening backwards like he'd been shot with a bazooka, one of my favorite spots in the match.  Both men went for multiple finisher attempts but neither could land them.  Finally Okada countered a sunset flip a la Davey Boy vs. Bret to take the first fall.  This was a spectacular 28-minute match, and it was only part 1.

The second fall was much slower, like the second act of a classic drama.  Okada exerted his dominance early on, actually smiling as he enjoyed his one-fall advantage. Omega made a comeback, hit a double stomp through a table, and after more traded finisher attempts on the outside, hit a reverse rana on the floor.  The back and forth exchanges toward the end of this fall were breathtaking.  Omega finally nailed two V-Triggers and the first One-Winged Angel of the match to take the second fall.  Okada sold this throughout the rest period like he was dead.  Tonally if the first fall was A New Hope, this was The Empire Strikes Back; darker, heavier and with loads of selling.

Okada looked to be totally screwed as Omega hit a V-Trigger and went for OWA, but he leveled the playing field with a Rainmaker.  From here on it was a story of both men just struggling to stay upright and finding new moves to throw at each other; Omega broke out a Styles Clash and a Phoenix Splash attempt.  My other favorite spot of the match was Okada going for a Rainmaker but being so exhausted he couldn't follow through, and collapsing mid-move.  Late in the fall both men were on their knees throwing strikes with nothing behind them.  The fatique being sold was palpable.  The last ten minutes were a bevy of finishers and reversals, with Omega taking multiple Rainmakers that Okada simply couldn't follow with pin attempts.  Finally Omega hit an OWA near the ropes, followed by a V-Trigger and another OWA for the win and the IWGP Heavyweight Title, ending possibly the greatest championship reign of all time (Stay tuned for an article on Okada's two years as champ).  The Young Bucks came down to celebrate with Omega, and the three embraced mid-ring, putting their emotional feud to bed.  Ibushi joined in and it seems all is right with the newly anointed Golden Elite.  Let's get Kota Ibushi a championship now, huh?  Maybe do a 1988 Four Horsemen thing?  Also I should note, the commentary here was excellent, particularly Don Callis's obvious pro-Kenny bias.  He was Bobby Heenan-great calling this match. 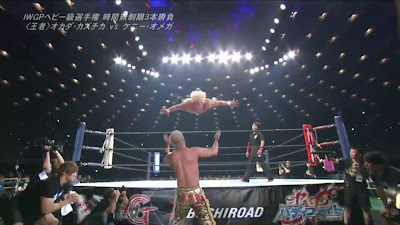 Anyway, like I said, this may have been the greatest wrestling match in history.  It built on everything these two had done before and took new twists and turns.  It was like an amalgam of their previous three bouts.  Like their first match, this was divided into three acts, but instead of being built around spectacle this was about drama and selling.  These two threw almost everything at each other in the first fall, sold like crazy in the second, and went for homerun swings in the third, all while fighting to maintain consciousness.  It was booked exactly the way a 2/3 Falls match realistically should be booked.  The first fall is the longest and most intricate, and each successive fall becomes more about selling the cumulative effects of the match as it wears on.  This is likely to be the defining match of this era.  Best 2/3 Falls match ever.  Best hour-plus match ever.  Probably the best match of any kind, ever.  ******  How many stars do you want, guys?  Take 'em all.

So while Dominion didn't boast as stacked an undercard as WrestleKingdom 12, it had the all-time masterpiece of a main event to catapult it to PPV of the Year status.  I'm gonna say there's zero chance anything tops it this year.  What a big night for Canadian wrestlers, huh?