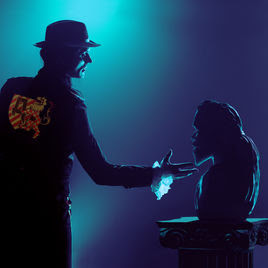 I first became aware of Swedish metal band Avatar around the time their 2016 album Feathers & Flesh was released.  Right away frontman Johannes Eckerstrom's outlandish appearance and wildly energetic charisma caught my eye, and the band's mix of melodic and death metal elements coupled with their general sense of humor hooked me in.  I'm generally not much of a death metal fan, but Eckerstrom's approach to that style of singing is uniquely visceral and he uses the technique to punctuate the vocal melodies as opposed to relying on it completely.  The band's quirky guitar riffs and harmonized double leads also set them apart from similar groups, giving Avatar a blend of thundering brutality and comical eccentricity.

Avatar's latest album Avatar Country runs a lean 43 minutes and contains a number of very good songs.  Unfortunately of the ten tracks only six feel like fully fleshed-out ideas.  The concept album about a fictional king (who is mentioned in every song title) opens with a sarcastically funny anthem of sorts, "Glory to Our King," which features layered vocal harmonies over symphonic backing tracks.  My ears perked up when I first heard the melodic strains, but at a mere 51 seconds the song ends before it can really get going.  I would've liked this idea to be further explored and run maybe two or three times as long.

The first real track is an 8-minute epic called "Legend of the King," which features Avatar's signature melodic metal sound, with a harmonized guitar riff serving as one of its main hooks, plus a lofty, operatic chorus.  This is probably the album's strongest song and feels like a band stretching its prog-metal legs.

Maybe the most instantly grabby tune is the AC/DC-esque title track, "The King Welcomes You to Avatar Country," a bouncy midtempo blues rocker on which vocalist Johannes Eckerstrom channels a bit of Brian Johnson while also providing some super catchy harmonies on the chorus.

The other two standouts are the European power metal-infused "Statue of the King," which has probably the strongest chorus on the album, and the de facto closing song "King After King," an uptempo tune with a bittersweet tone (Its lyrics deal with the king's death and remembrance).

The record finishes in anticlimactic fashion with a pair of rather forgettable instrumentals that seem like they were added to artificially extend the album to full-length.  Avatar Country is essentially a six-song EP stretched out to ten songs.

Overall despite its strong points, this record feels like a bit of a disappointment after the hugely satisfying Feathers & Flesh; with not enough meat on its bones and several promising ideas left partially unexplored.  It's fine as an interstitial release, a la Anthrax's Attack of the Killer B's, but it leaves me hoping Avatar gets back in the studio sooner rather than later.