IT: Chapter Two is to its predecessor like Kill Bill vol. 2 was to vol. 1.  In both cases the first half is a visceral, thrilling exercise in style, while the second deals more with the consequences and the characters, lending added weight and profundity to the story as a whole.  It has its share of scary moments, but it's about something much more substantial than that.  I kinda loved this movie. 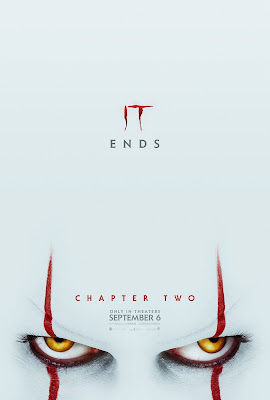 We pick up 27 years after the first film; an adult Mike Hanlon (the one Losers Club member who stayed in Derry, played by Isaiah Mustafa) summons the others back home because the evil entity Pennywise has returned.  Bill Denbrough (a somber, emotive James McAvoy) is now an accomplished author/screenwriter (who like Stephen King himself has developed a reputation for writing bad endings - meta-joke alert!); Eddie Kaspbrak (James Ransone looking like a grown-up dead ringer for Jack Dylan Grazer) is a Manhattan risk assessor, married to a woman much like his domineering mother (played by the same actress, in a nice touch); Richie Tozier (show stealer Bill Hader, in a breakout performance of biting sarcasm masking genuine melancholy) is a hotshot standup comedian; Ben Hanscom (Jay Ryan) is a wildly successful architect, now buff but lonely; Stanley Uris (Andy Bean) is an accountant, ever consumed by fear; and Beverly Marsh (Jessica Chastain, wonderfully sympathetic as always) is a successful fashion designer married to an abusive bastard.  The early scenes in which we catch up with these characters and see them reunite felt like visiting old friends again; their dinner reunion scene was note-perfect and I could've watched them interact for hours (maybe the only gripe I have with this film is that scenes like this didn't go on longer).

The adult actors are all brilliantly cast to match up with their childhood counterparts, and their touching performances and chemistry form the backbone of this film.  Yes, Pennywise and his scary clown antics are what sell the tickets, but for me Chapter Two was much more about these damaged adult children overcoming their respective childhood traumas (stuff like this is why IT 1 & 2 will become perennial viewings in my house).  I think that was always what Stephen King was getting at with this story, thus complaints of "Not as scary as Chapter One" seem to be missing the point.  This film is probably not as scary as the first; we go into this one already knowing what Pennywise is about and how he operates, thus the scares mostly play out as we expect.  But since the characters are so well-drawn and brought to life, we care about what happens to them and the horror elements work both from a technical and emotional standpoint.  I actually found myself tearing up one more than one occasion, a reaction I'm not sure any other horror film has brought out of me.
As for Pennywise, Bill Skarsgard is chillingly fantastic once again, swinging for the fences and delivering multiple unnerving moments, the best of which occurs early in the film under the bleachers at a baseball game (This scene is fucking HORRIFYING).  But Pennywise seems to have less screen time here, as more of the film is devoted to the Losers Club, their friendships, their tribulations.

I've read several reviews complaining about the film's near-three-hour running time, but for me Chapter Two felt long in a good way, suitably epic, but not once did it drag, and when the lights came up I didn't want it to be over.  I wanted to spend even more time with these characters and see how they all turned out.

One of the most effective sections for me is an extended sequence where each of the Losers, who have strangely forgotten most of what happened to them in 1989, have to retrieve an "artifact," something meaningful they left behind as kids.  This task triggers memories they buried, of a time when their group friendship fell apart for a month.  Said sequence features numerous additional scenes of the child actors (newly filmed and digitally altered to "de-age" the kids, mostly seamlessly), and we get to discover more of what happened to them that summer and why they were drawn back to each other.  This further fleshes out both incarnations of our Losers Club characters and invests us fully in the eventual showdown with Pennywise, making it more than just a flashy light show.

Now taken as a whole, IT becomes an epic two-part parable about conquering everything used to divide us - hate, fear, intolerance, guilt, suffering - and finding strength in each other, stamping out our personal demons, and above all being guided by love (Wasn't it Mickey Knox in Natural Born Killers who said "Love beats the demon?").  For its flaws, IT: Chapter Two is wonderfully touching and makes the first movie more meaningful, elevating it above other roller coaster horror films.  It is an equal, and in some ways superior, to Chapter One.