Tool's first album in thirteen years, Fear Inoculum, is finally here at long last.  If I were to sum up my swirling multitude of feelings about it in one sentence, it would be this: I like it quite well, but I was hoping I'd love it. 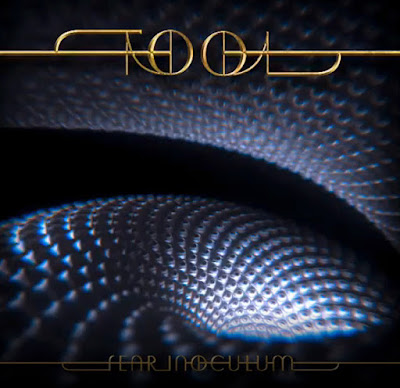 Fear Inoculum consists of ten tracks (three of them digital-exclusive transitional pieces) over a sprawling, patience-taxing 86 minutes.  Of the seven proper songs, one is a roughly five-minute Terry Bozzio-esque drum-showcasing instrumental, and the other six are all ten minutes or longer.  Those are some looooong songs, even by Tool standards.  So this is an album that, as Maynard James Keenan pointed out, requires a lot of aural stamina and several listens to fully absorb and appreciate.  I think I'm up to six rotations so far.

So here's what the album is lacking for me, and let me preface this by saying I like every song on here.  The transitional tracks are skippable (but then I've always felt that way about Tool's tone poem stuff), but I enjoy all seven full-length songs.  That said, I don't think I'd place any of them on my list of Greatest Tool Songs.  The album is missing an "Aenema," or a "Patient" or a "Vicarious," that one song (or more) I can't wait to hear every time I press play.  In listening to Fear Inoculum my excitement level is at a steady 7.5 or 8 out of 10 but doesn't ever spike from there.  Every song sounds like Tool; the intricate instrumental performances are first-rate, the production crisp, clean perfection, but the album is missing the emotional connection and dynamic songwriting of Tool's prior releases.  It doesn't have the nihilistic gloom of Aenima, the tranquil melancholy of Lateralus, or the mournful weight of 10,000 Days (Unpopular opinion: Undertow is my least-favorite Tool record).

I think much of that has to do with Keenan's vocal parts, which for me don't build to a peak like they have in the past.  His vocals are sparse to begin with, especially given the marathon length of each song, but he tends to hover around a surprisingly small melodic and emotive range on this album.  Was he not as emotionally connected to the music this time around?  Did the band's repeated compositional renovations over the last few years take him out of the zone once it was finally his turn to contribute?  I dunno, there's just something missing for me.

As for the instrumental performances, as I said, they all sound great.  Adam Jones's guitar parts are as intricate as ever, Justin Chancellor's bass wonderfully complements them as always, and of course Danny Carey shines behind the drum kit.  But the ideas themselves don't effervesce the way they used to.  Each of the last three albums had me saying "Oooh, they've never done this before!"  Fear Inoculum almost sounds like a summation of everything Tool has done on previous records; Jones's double-string pulloff technique introduced in "Jambi" makes a return here in "Invincible," Carey's syncopated tabla groove in "Fear Inoculum" brings to mind "Reflection," and so on.  There's also so much material written in 7/4 time that it's often hard to remember which bits are from which song.

I realize from everything I've said thus far it must sound like I hate this album.  I don't, at all.  As I said earlier, I like it quite well.  It's just that Tool's last three albums have been such transcendent works of art it's hard to settle for something that's simply a competent addition, particularly after a thirteen-year wait.  My favorite tracks are the 15-minute closer "7empest," which seems to warn of an impending storm awaiting a political demagogue ("No amount of wind could begin to cover up your petulant stench and demeanor"), "Invincible," taking on a sorrowfully autobiographical bent as Maynard sings of aging warriors "struggling to remain relevant," with phrases like "Once invincible/Now the armor's wearing thin," and "Descending," a societal cry for help, pleading that someone or something "rouse all from our apathy," imploring that we "Stay the grand finale/Stay the reading of our swan song and epilogue."  This album has a lot to enjoy, plenty of math-rock puzzle pieces to assemble, Maynard's usual thought-provoking word-imagery, and Tool's signature psychedelic tone.  I think if I had my way I'd trim two minutes from each song and add an eighth proper track, one that knocks my socks off.

Fear Inoculum is an ambitious, expansive piece, from a band that's been sorely missed.  It's great to hear them confounding our senses again after such a long absence.  I just wish I loved this album as I do the others.