Music Review: KoRn's The Nothing is a Return to FoRm

Nu metal pioneers KoRn are back with a new album, The Nothing, and since we did this for their last album, my colleague Mike Drinan (@mdrinan380) and I are back to discuss its merits.  Maybe an argument will ensue, who knows? 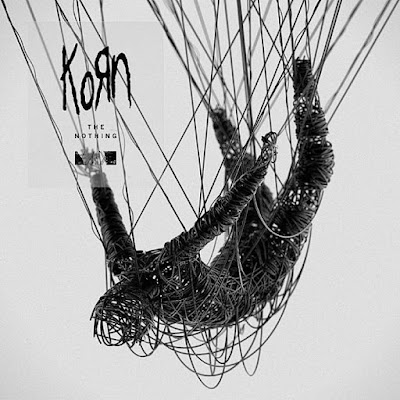 Justin: The Nothing is a moody record (as really all KoRn albums are), made more poignant by Jonathan Davis's lyrical focus on the loss of his ex-wife, who passed away last year.  This theme of despondency and loss permeates every song on the album and somewhat returns KoRn to the "music as therapy" vibe so prevalent on their early records.

Mike, what is your take on The Nothing?


Mike: Oh man, I really enjoyed this album. Knowing what happened with his ex-wife, I went into this album expecting it to be dark but I was a little caught off guard by just how dark it was, thematically speaking. Jonathan's weeping at the end of the first track really sets the tone for this project and I was ready for all of it. Everything I love about KoRn is on this album, even if there is a real prevalent late 90s nu-metal sound and feel to it, the band sounds fresh and invigorated. Ray Luzier's drumming is incredible, the riffs are really good, especially on "The Ringmaster," and Jonathan's vocals sound amazing from the deep, gutteral growl to the spiny, sing-songy style that has become his trademark over the years. Fieldy's bass adds muscle and provides the emotional punch to the music that ties the album's theme together. This album is a huge step up from their previous album, The Serenity of Suffering, and it's not even close for me.


Justin: Right off the bat, Luzier and Fieldy's presence are felt much more on this album than on Serenity.  Fieldy's trademark percussive bass attack is back, and Luzier's grooves are rock solid (I've said it before but Ray is miles ahead of Dave Silveria as a drummer).  As unfortunate as his thematic motivation on this album, Davis actually sounds like he means it this time, where TSOS sounded like a once angry guy going through the motions just so it would still be a KoRn record.  I do feel like he hasn't quite recaptured the visceral sandpaper screams of Life is Peachy, but maybe that time has passed.  Still his melodies are head and shoulders above those on TSOS, I love that he's rediscovered major keys, and the bridge of "This Loss," brief though might be, is probably my favorite stretch of music on the album.  It's the most soulful singing of Davis's career and I wish they'd built the entire song around that section.  Maybe that can be a blueprint for the next one.

I don't think I'd call any of the songs truly great, but The Nothing is a very easy album to listen to and its 44 minutes fly by.  Every song has at least something to bring you back for repeat listens and the bulk are very well-crafted.  Highlights for me include "Can You Hear Me" (a welcome Untouchables throwback; my only complaint about this song is it's so short), "The Darkness is Revealing," and "The Ringmaster," all three of which have very memorable chorus hooks.  With TSOS I was bored by the end.  That's not at all the case this time.

Mike: Yeah, none of the songs are truly great but I can hear a ton of fan favorites coming out of this project. "Cold," "The Ringmaster," and "H@rd3r" being a few that stick out to me. Especially the latter of the three, with Jonathan's rapid fire delivery "harder and harder and harder" combined with Ray's drumming on top of it, should be a concert staple from here on out. The build up in that track is insane and it's one of my favorites.

I never once felt bored by this album either, which was surprising to me considering the more I listened to "You'll Never Find Me" it began feeling flat to me, as if it was a track I could do without. Now, even though it's not close to an extraordinary song, I found myself enjoying it a lot more within the context of the album. It no longer felt like a skippable song. Maybe "Finally Free," and that's a strong maybe only because there are a ton of Linkin Park elements to JD's vocals, especially in the chorus.

Highlights for me are "H@rd3r," "The Ringmaster," "Cold" and "The Darkness Is Revealing." I'm throwing "Cold" in there because it really gives the album a great jumping off point and is going to sound amazing in an arena.

Your biggest beef with TSOS was the songwriting was lackluster. How do you feel about it on this?


Justin: "You'll Never Find Me" is definitely my least favorite; it's odd how often their first single from the album is not a standout for me - "Got the Life," "Falling Away from Me," "Twisted Transistor" and "Never Never" are some other examples.

The songwriting is a big step up from TSOS - Jon's melodies are far more memorable and feel more organic.  There are nice little keyboard and guitar flourishes too that I felt were missing on the last album.  The songs here feel less like they were obligated to make them as heavy as possible for fear of pissing off their diehard fans.  The heaviness is more a byproduct of the mood than a product in and of itself.


Mike: The band is known for those guitar flourishes, those little licks add some kind of weird, uneasy claustrophobia to the songs and both Head and Munky are brilliant using them. I agree with your take on the songwriting. The overall sound and arrangement of this album seems more natural and fluid. I think it's the reason the band sounds as good as they do on this.

I also found the lyrics to be excellent. More noticeable to me on this album than previous releases is the amount of pronouns Jonathan uses. The lyrics are evocative yet vague, and the pronouns left me uneasy and agitated which helped connect me to the themes of the album as a whole. Like on "The End Begins" where he repeatedly warns "they're coming" and in the song "The Seduction of Indulgence" where he sings "Looking at me oh, they take their time." Jonathan's lyrical ability is on full display and it's great to see. There are a few lines on this album that do fall a little flat for me, like the chorus on "Gravity of Discomfort." They just felt a little too basic for what I expect out of him but it doesn't come close to diminishing the song in any way. That might be the only beef I have with this album.


Justin: Munky and Head are great with little guitar textures but also the use of keyboard pads is great here, like on Untouchable, Untitled and The Paradigm Shift.  They're very Nine Inch Nails-y and they fit perfectly in KoRn's songs.

I think my favorite quote (coincidentally from my favorite segment) is during the bridge of "This Loss," when he sings "Happiness is a club I'll never be in."  Sums up KoRn's music quite succinctly I'd say.


Mike: Yeah, that line stuck out to me with each listen. Probably because I read an interview he gave about how he has to put up with all these shitty things in his life but when he hears how his songs have helped other people he is okay with how everything turned out. It's a lyric of acceptance, not of self-pity which is probably why it stuck out to me.

My favorite line so far is from "The Darkness Is Revealing" - "Everything I had to hide is all on my sleeve/And behind the curtain lies my soul, I’m bleeding." For me, it's the album's thesis statement.


Justin: A lyric of acceptance, I never really thought about it like that but I think you're right.  It's comforting in an odd way; KoRn's music has always been about coping with trauma as opposed to conquering it.  You never really get over a damaged childhood, you just learn to manage it and find some sort of unsteady peace.

Anyway, The Nothing is definitely a good steer in the right direction.  The songs are all solid, the performances are much stronger than on TSOS, there's enough aggression to please the core audience but a bit of experimentation to set it apart from other records.  It's a satisfying effort from a band that seems to thrive on the latter but is financially bound to the former.


Mike: The band returned to their sound on TSOS, but on The Nothing they are full on leaning into it. The songwriting, performance, lyrics and the overall feel of this album is a welcome improvement from its predecessor that it should make KoRn fans happy and excited. They've found their strength again, turning tragedy into inspiration and creating a project that finds them in vintage form.