AEW All Out Review: Chris Jericho is Buddy Rogers

AEW turned in a very strong PPV showing this past weekend, with a lineup that included a few ****+ matches, one of which was a Match of the Year contender and a throwback to a more dangerous time in wrestling.  We saw the crowning of an inaugural champion, an old school face vs. heel story-based match, a violent car wreck triple threat, and above all the further building of a brand.  All Out had a little something for everyone, and while still not an instant classic show, there was plenty to like and plenty to be optimistic about. 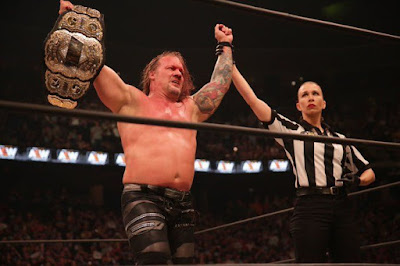 The PPV kicked off with a very fun six-man tag, as So-Cal Uncensored faced the Jurassic Express.  The consummate veteran SCU team played the de facto heel role (though very few stars on this show got booed) against the excitingly wacky trio of Jungle Boy (screaming "future star" as always), freakishly tiny Marko Stunt, and the super-over Luchasaurus.  I'd have liked to see Jurassic Express take this win, but the match was more about establishing SCU's status as a premier trio while still showcasing the young guys.  After twelve minutes of fast-paced back-and-forth action, SCU hit the Best Meltzer Ever on both Jungle Boy and Marko Stunt, pinning Jungle Boy for the win.  A fine opener.  ***1/4

Bizarrely the second match was Kenny Omega vs. PAC - what is this, a WWE show??  As expected, this was an excellent bout, and both guys made the most of a tough last-minute situation (Jon Moxley of course was forced to miss the scheduled match with Omega due to a MRSA infection).  This match had great action and lots of big spots, PAC came off like a major star with a chip on his shoulder, and Kenny was his usual self.  PAC is yet another example of a guy WWE bafflingly missed the boat on, once again proving it's not the wrestlers, it's WWE's creative team that's the problem.  Throughout this match PAC had Kenny's big moves well-scouted and was able to counter them frequently.  Late in the match there was a somewhat botched Poison Rana, but aside from that everything here looked crisp.  PAC locked in a Brutalizer (more or less a Rings of Saturn with the victim in a standing position), and Kenny dropped to the mat and quickly passed out for the upset loss.  Kenny is now 1-2 in AEW singles matches, which seems kinda crazy to me.  I wonder how they'll have him rebound, as he seems the clear choice to be the top babyface star over the next year.  But PAC has now announced himself as an upper-tier badass, rounding out the title contenders.  This was pretty great.  ****1/4 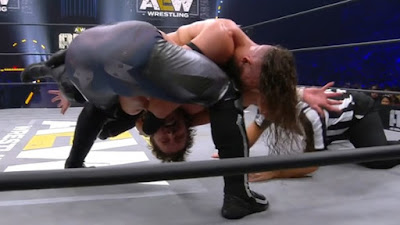 The most violent match of the night was next as Jimmy Havoc, Darby Allin and Joey Janela tried to murder each other in a Cracker Barrel Clash hardcore bout.  Unlike most matches of this kind it wasn't all just sloppy brawling; all three guys punctuated the violence with innovative high spots and managed to get the barrels over as a new crowd-pleasing weapon.  At the beginning of the match Allin and Janela duct taped Havoc to a chair, forced thumbtacks into his mouth and taped it shut - Jeezus that's dangerous - and then Allin dove on top of him while he was taped up.  Other highlights included Havoc giving Janela paper cuts between his fingers and across the corners of his mouth, Janela hitting a Destroyer over the ropes and through a table, and Allin breaking out a skateboard covered with thumbtacks and hitting Janela with an ollie from the top rope, leaving a couple dozen tacks in his back.  At the end of the match Allin took himself out, missing a barrel-assisted Coffin Drop onto the steps, and Havoce finished Janela with a Rainmaker through a barrel.  You can't do these matches every night, but as a once-in-a-while car wreck this was tremendous.  I'd have given Allin the win here, as he has the most upside for me.  But this was one of the more entertaining garbage matches I've seen in years.  ****
The next two matches inevitably suffered from their placement after two really hot bouts.  First we had best Friends vs. The Dark Order, in a solid but ultimately forgettable encounter designed to get Evil Uno and Stu Grayson over.  Both guys looked good here but they desperately need better ring gear.  Uno looked like an out-of-shape, part-time indie guy, like the Disgustng Blob character from Billy Madison.  Best Friends admirably bumped around for them and provided some nice dives.  After thirteen minutes Uno and Stu hit their Fatality finisher on Chuck Taylor for the win.  Orange Cassidy made his debut after the match and aligned with Best Friends.  This was fine but kind of tepid.  The Dark Order's act needs some tweaking.  **1/4

The lone women's match on the main show pitted Riho against Hikaru Shida, and while both women worked hard and most of the action was tight, the crowd was only mildly into it.  Shida to me screams "division centerpiece" and I can't fathom having her lose here, but they did.  Riho is a good worker and a likable babyface, but she comes off as a timid little girl, while Shida has incredible presence (understandable since she's also a professional actress) and is just as strong a worker.  If Shida isn't the top women's star in 3-6 months I'll be shocked.  Anyway, Shida dominated her tiny opponent for much of the match but couldn't keep her down, and after a series of nearfalls, Riho scored a headscissors cradle for the quick pin.  Riho will now face Nyla Rose on October 2nd to determine the first AEW Women's Champion.  Rose appeared on the ramp after the match and licked her lips at the prospect of avenging her earlier loss to Riho.  This was alright.  ***

The final trio of matches were all quite good, starting with Cody vs. Shawn Spears in a delightfully 80s-style contest.  Tully Blanchard played the role of Spears' manager, and was perfect here, distracting the referee, handing Spears foreign objects, and generally being a dick.  I hope Blanchard sticks around.  He's also in fantastic shape for 65.  This got started before the bell as Cody attacked and both men brawled through the crowd.  After that Cody would get the upper hand only for Spears and Tully to take advantage of ref distractions and steal the momentum.  At one point Spears took off Cody's weight belt and threatened to use it, but Earl Hebner would have none of it, yelling at Spears and taking the belt away.  But then Tully gave Spears his own belt and he whipped Cody while Earl wasn't looking.  Later Cody hit a CrossRhodes but Tully pulled Cody off.  Cody's wingman MJF went after Tully, but Spears took him out, and then Arn Anderson showed up out of nowhere, the crowd went apeshit, and Arn hit a spinebuster on Spears to level the playing field.  Arn looked really out of shape, like uncomfortably so.  After Arn's exit, Cody hit a draping DDT and another CrossRhodes for the win to cap off a very entertaining semi-main event-type match.  Cody is a hugely over babyface and I assume he'll be the first to challenge Jericho for the title.  ***3/4 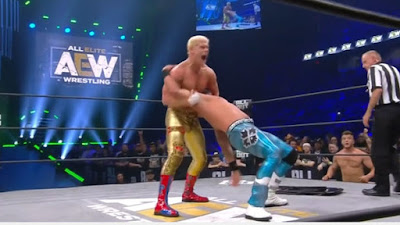 The match of the night, quite easily, went to Lucha Bros vs. The Young Bucks, in one of the wildest and most dangerous ladder matches I've seen in years, if not ever.  This match blew away every WWE ladder match since the TLC classics, and while not quite matching that level of career-shortening danger, came pretty damn close.  On several occasions the two younger brothers would hit simultaneous moves on their older opponents, and vice versa, which was fun.  This match was chock full of crazy high spots, including multiple top rope dives, an absolutely brutal (but safe) Canadian Destroyer by Penta on Matt Jackson, over a ladder and through a table, and late in the match a spot where Nick was atop a tall ladder going for the belts only for Penta to push the ladder over and send Nick crashing through a ringside table.  Nick's feet got caught on the top rope and he went violently head-first through the table, miraculously avoiding injury.  Matt swiped Penta's mask at one point, which drew big boos from the crowd, but Penta recovered and the Lucha Bros hit their tandem cradle piledriver on Matt onto a ladder, then grabbed the belts to retain.  Post-match two men in Bill Clinton and JFK masks (a nice nod to Point Break) attacked both teams and revealed themselves to be LAX.  This match was goddamn awesome and one of the best ladder matches of the last twenty years.  ***** 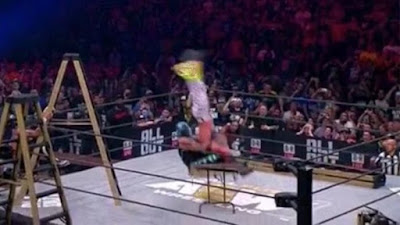 The Chris Jericho-Adam Page main event was in the unenviable position of following an impossibly good match, but both guys worked hard to live up to their main event spot.  One thing of significance was Aubrey Edwards as the referee, making this the first-ever PPV main event to be officiated by a woman.  They started out slow but picked up the pace quickly, with Page hitting a tope and going for his apron shooting star press only for Jericho to counter with a Codebreaker on the floor.  This was a great spot.  Page narrowly beat the count back in and Jericho worked him over, locking in the Walls for a near-submission.  Page hit Jericho with some legit punches, opening a cut above Jericho's eye that bled everywhere.  Jericho countered a Buckshot Lariat with another Codebreaker, but Page came back and hit his Deadeye tombstone for a nearfall.  He hit the Buckshot for another two-count but Jericho suddenly hit his Judas Effect spinning elbow to get the win and become the first AEW Champion.  Considering what they had to follow, this was a very good main event.  Jericho's slowed a lot over the last five years but he's adjusted his style accordingly, while Page came off as a top-flight up-and-comer.  Making Jericho the first champion was the right move; as Lords of Pain's Rich Latta stated, he's AEW's Buddy Rogers, an older established star waiting for Bruno to unseat him.  I imagine Kenny Omega has to be Bruno, but we'll see.  At any rate, this was a fine main event.  **** 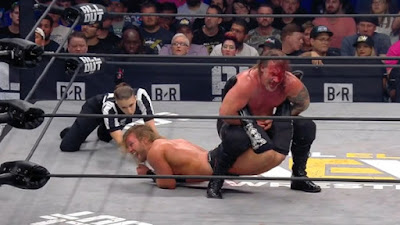 All Out was arguably AEW's best offering to date, not without its flaws but with lots of enjoyable matches and one absolutely amazing spectacle.  We have four weeks till their TNT debut and the pieces are more or less in place for a memorable kickoff show.  It'll be interesting to see how they build to their November PPV and whether they're able to snag any other big stars in the next few months or whether they'll just concentrating on introducing new ones.  It's an exciting time in pro wrestling.

Best Match: Lucha Bros vs. Young Bucks
Worst Match: Best Friends vs. Dark Order
What I'd Change: Put Omega-PAC much later so you have four big matches in a row, have Shida defeat Riho.
Most Disappointing Match: Nothing really disappointed.
Most Pleasant Surprise: The Cracker Barrel Clash
Overall Rating: 9/10

Posted by Justin Enuffa Ballard at 11:36 AM