Alright, it took me a few days to watch this whole thing (lotta shit going on these days), but I finally finished it last night, and goddamn this was a good show.  AEW has outdone themselves with Full Gear, a seven-match main card featuring a stellar double main event and a slew of good-to-great undercard bouts.  Some new talents got big wins here, we got a great heel turn, and two of the main event guys tried to murder each other (if you're into that sorta thing).  This was one of the best shows of 2019. 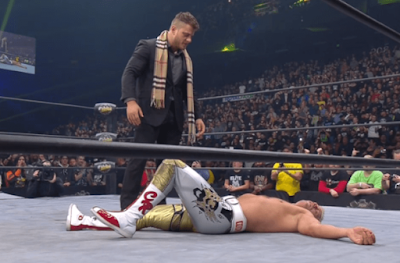 The show kicked off with a Bucks Hot-Opener Special, as they mixed it up with hated rivals Ortiz & Santana (I hate the name Proud & Powerful for these guys - they need to come up with something better).  This was wild and blistering, as one expects from a Bucks match, with lots of high spots mixed with good psychology.  Notable were callbacks to two classic bouts - one was the Bucks vs. Evil & Sanada from Dominion 2018, with Nick missing a kick and injuring his leg on the post (which came back to haunt him when it was time for the Meltzer Driver), the other was the Steiners-Headshrinkers match from WrestleMania 9, as Matt countered a Street Sweeper attempt with a powerslam off Ortiz's shoulders.  The match went a fairly epic 21 minutes and came to a head when Matt missed a corner charge and P&P hit the Street Sweeper on Nick for the sudden pin.  Post-match they got into it again but the Rock n' Roll Express, who were seated at ringside, got involved and Ricky Morton actually hit Ortiz with a fucking Canadian Destroyer and then did a tope to the outside.  At age 63.  Just insane.  Anyway, pretty great stuff and the right team went over.  This feud will continue, as evidenced by the backstage brawl on the following Dynamite episode.  **** 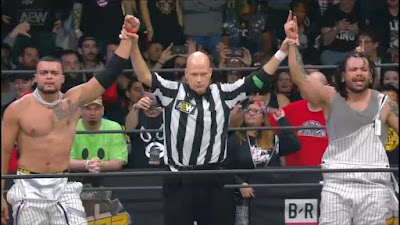 Hangman Page vs. Pac was a fantastic battle that made both guys look great and served as a definitive Page match.  These two put together a great mix of brawling and high impact signature moves, with Pac avoiding the Buckshot multiple times and Page cutting off the Black Arrow and hitting a top rope fallaway slam.  The most brutal-looking spot came midway as Pac hit a brainbuster onto a ringside chair; this looked like it killed Page.  At the end of the bout Page missed another Buckshot Lariat and Pac tried to low-blow him, but Page caught it and nailed the Deadeye piledriver for the win.  Just excellent stuff from both guys.  ****1/4 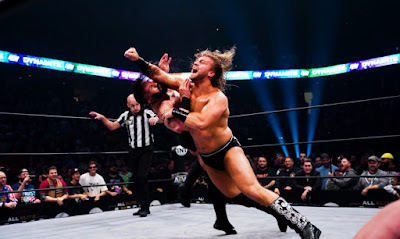 The weakest match on the proper PPV (which was still a solid bout) was Shawn Spears vs. Joey Janela, given the unenviable task of following the first two matches.  But Spears looked strong here and Janela got to do a few daredevil spots, including taking a snap powerslam on the apron.  At one point Spears cleverly tied Janela's hair to the turnbuckle using the tag rope and got in several free shots.  The finish involved some great heel tactics - Spears untied a turnbuckle pad, forcing the referee to put it back on, and he and Tully did the old Brain Busters spike piledriver on the floor.  Spears then rolled Joey back in and hit his Death Valley Driver for the decisive win.  Nothing amazing but a very watchable match to help establish Spears as a rising heel star.  **3/4
The three-way Tag Team Title match was exactly what you'd expect.  Non-stop action and lots of wild aerial fare, with all three teams getting plenty of room to shine.  Ray Fenix got in the most spectacular spots as usual, but everyone looked good.  The finish came after SCU broke up the pin following Private Party's Gin & Juice finisher, and then hit Kassidy with their SCU Later to retain the belts.  Post-match Lucha Bros ran wild on SCU but the lights went out and a duplicate Pentagon appeared, hitting the real Pentagon with an STO and Angel's Wings before unmasking to reveal the returning Christopher Daniels.  Seems like this angle should've happened during the match, but it was still clever.  This match was fun spotlighting AEW's burgeoning tag division.  ***1/2

The best women's match in AEW history was next, as Riho and her mentor Emi Sakura put together a wonderfully intense battle that built to a ferocious peak with reversals and counters all over the place.  Sakura was visibly tearing up at the outset, as this was their 269th match together but the first on a worldwide stage.  Sakura dominated much of the action using her size and strength advantage, but Riho played the classic underdog, outmaneuvering her larger opponent and hitting kicks and double stomps.  Riho narrowly escaped after a Torture Rack drop by getting her foot on the ropes, and then came the aforementioned finishing sequence, built around La Magistral cradle.  Each woman kept countering the other, exchanging rollups and cradles, until Riho finally held on for the three-count.  Fantastic closing stretch to cap off a really good match.  ***3/4 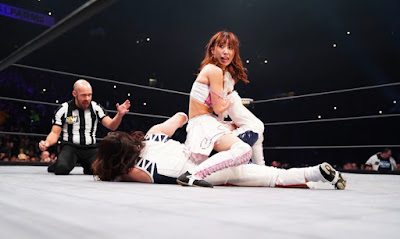 The semi-main event slot went to the much-anticipated, brilliantly built Chris Jericho vs. Cody Rhodes AEW Title match, which had a panel of judges in case of a time limit draw, and where if Cody failed to win the belt he vowed never to challenge for it again.  Both guys had corner men; Jake Hager accompanied Jericho while MJF was in Cody's corner (since Dustin is still recovering from the parking lot attack a few weeks ago).  This started slow with the clear intention of tricking the crowd into thinking it would be a Broadway, but picked up the pace in the second half.  A "happy accident" occured after about fifteen minutes when Cody went for a plancha over the ropes but missed and landed forehead-first on the entrance ramp, opening a sickening gash on his forehead.  While that was obviously cause for concern it also added drama to the bout and played into Jericho's second- and third-act domination.  Cody's last gasp came when he countered the Judas Effect and hit the CrossRhodes but Jericho kicked out at the last second.  He hit Dusty's Flip Flop Fly elbow but only got another two-count.  Cody went for the Disaster Kick but Jericho countered it into a Codebreaker, then began whipping him with his weightlifting belt (which he wore to troll Cody).  He locked in a Liontamer but Cody made the ropes.  Jericho argued with Aubrey Edwards and shoved her, but she shoved him right back, leading to Cody snaring a small package for a nearfall (How hilarious would that ending have been?).  Jericho locked in another Liontamer and stomped on Cody's head, and finally Cody's best friend MJF had had enough.  MJF, on the verge of tears, threw in the towel to have the match stopped.  Jericho celebrated with his buddies, while Cody confronted MJF, teasing that he might attack him for costing him the match.  MJF apologized profusely, and then suddenly kicked Cody in the groin, smirking with evil glee as the crowd ripped him apart (one fan actually threw soda at him as he walked to the back).  This was an absolutely stellar old-school match with a well-executed heel turn angle that a) sets up a high-profile match for the next PPV and b) gives Cody an out from his promise, since MJF screwed him over.  The following dynamite episode MJF cut a career-making promo to explain his actions.  This kid has IT (he's 23 and he cuts a promo like a 20-year veteran), and this feud will be amazing.  ****1/2 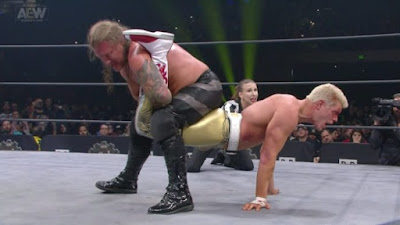 The main event was of course the controversial Lights Out match between Jon Moxley and Kenny Omega, which went nearly forty minutes and was full of cringe-inducing violence.  These guys were out to make people uncomfortable and they did that in spades.  This isn't my favorite type of match by any means; I'd like to see them just have a regular scientific match at some point.  But in terms of this match doing what it set out to do, this was a rousing success and extremely well executed.  In Roger Ebert's terms, "It's not what the film is about that matters, it's how it is about it."  These guys started with plain old brawling but within minutes they were going under the ring for plunder.  Moxley whipped out the barb wire baseball bat and made Kenny bleed from his back and forehead almost immediately.  Kenny returned the favor and then brought out a board covered with mouse traps.  But Moxley used it against him, suplexing him on it (making me wonder how many of the traps actually pinched him).  Other weapons included a garbage can, a long gold chain, Kenny's barb wire broom, a bed of barb wire, part of the entrance set, and for fuck's sake a bag of broken glass.  After Kenny suplexed Moxley on the aforementioned barb wire bed, the fight went back into the ring, where Mox undid part of the canvas and exposed the wood planks.  Both guys took some painful-looking bumps on the wood, culminating with Kenny missing a Phoenix Splash and falling victim to the Paradigm Shift DDT to give Moxley the win.  On balance I thought this was a really strong spectacle of a garbage match and appreciated that it had teeth unlike most hardcore matches these days.  That said, I felt like they relied too much on the weapons and should've gotten to them more organically rather than constantly going outside to find new stuff to use.  But this crowd ate it up, so it certainly worked.  I'll give the match ****1/2. 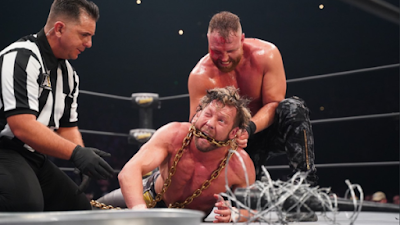 So yeah, four ****+ matches and two ***+ ones, with the worst match still a solid effort.  That there is a pretty great PPV, and easily AEW's best so far.  This company is coming together nicely and planning long-term, building new stars and solidifying their upper tier guys.  This is wrestling.

Best Match: Overall I'll go with the old-school awesomeness and starmaking MJF angle.  Chris Jericho vs. Cody Rhodes
Worst Match: Shawn Spears vs. Joey Janela, and if that's your worst match you've put on a fine show.
What I'd Change: The main event could've reached five stars if it relied more on wrestling and the weapons involvement had been more organic.
Most Disappointing Match: Nothing really.
Most Pleasant Surprise: Page vs. Pac was even better than I expected
Overall Rating: 9.5/10