It's the first AEW PPV since the launch of Dynamite, which means it's the first PPV the company has been able to hype in the traditional fashion.  Thus for me it's the most exciting PPV of AEW's young history.  Let's talk Full Gear! 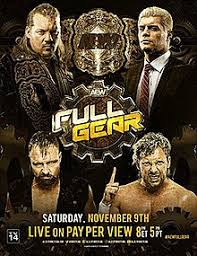 This Saturday's extravaganza has to be considered the most stacked AEW show thus far, with a huge AEW Title match, a triple threat tag title scramble, and three big grudge matches, including the delayed Kenny Omega-Jon Moxley war.  This show on paper has PPV of the Year potential.

I realize I haven't been writing much about Dynamite as a show.  Five weeks in, the fledgling primetime series has already reminded me how much fun a two-hour weekly wrestling show can be.  With its strong balance between good wrestling, hot angles, emotive promos (it could use more of these), and innovative video packages, Dynamite is an incredibly easy show to watch and in many ways feels like what RAW used to be when RAW was consistently good (something that last happened nearly two decades ago).  The wrestling is fun, the crowds are always raucous, the promos are genuine and don't overstay their welcome, and I absolutely love the commentary team.  Jim Ross, Excalibur and Tony Schiavone have an easy chemistry, actually get along with each other, and seem happy to be there, unlike WWE's various announce teams, who come off as scripted corporate shills and bicker incessantly.  I enjoy spending time with the AEW announcers, and it's a pleasure to hear Ross and Schiavone together again after so many years.  Dynamite isn't a perfect show, but it is a truly enjoyable one.  I look forward to seeing this show reach its full potential.

Alright, back to Full Gear.  This show's stacked.  Let's pick some winners... 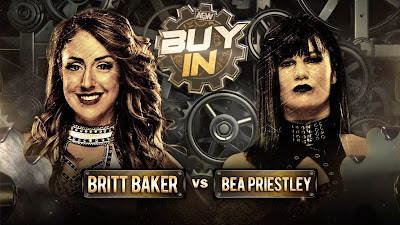 Considering how well they've built up this feud I'm actually a little sad this match isn't on the main card.  Baker is definitely green but her Pittsburgh homecoming a couple weeks ago was handled so perfectly she came off like a megastar, and this should be her defining match thus far.  Hopefully the in-ring work will deliver.  I have to think Baker gets the win here. 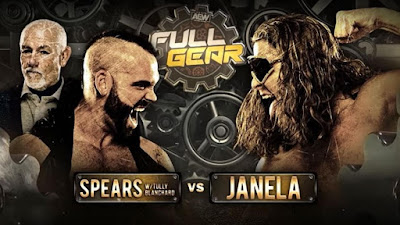 Spears has a ton of asshole heel potential and it seems like this is the beginning of his real push.  His short feud with Cody a few months ago served as more of a tryout as it turns out; I figured he'd beat Cody in their first match and feud for the rest of the year, but that wasn't in the cards.  Spears needs a big win here to establish himself just below the top tier of stars, otherwise it's a waste to have a talent like Tully Blanchard as his manager/mouthpiece.  Side note: I'm not sure what Tessa Blanchard's contract situation is, but if she's a free agent, AEW needs to snap her up immediately and pair her with her father and Shawn.  As for Joey Janela, he'll bounce around like crazy to make Spears look like a brutal jerk, so this should be a solid match. 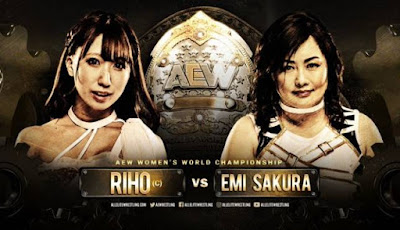 It seemed to me an odd choice for Riho to be the company's first Women's Champion, as she's very young and thin as a rail, but man is she over with this audience.  My pick to build the divison around would've been Hikaru Shida, who for me just has that "IT" factor, but I have to give AEW credit for seeing what they have in Riho.  This will be her first PPV Title defense, and it's against her mentor Sakura, who just scored a pinfall victory over her this week.  The match should be good, and as with all Riho matches the crowd will make it even better.  Riho obviously needs to keep the strap. 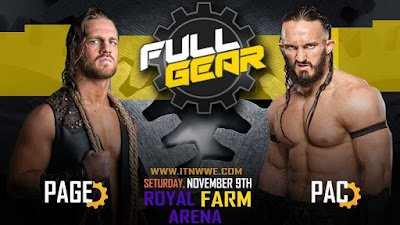 These guys are both on the verge of cracking the top tier and this feud has been well-built.  It's simple and personal, but it's also a case of "I need to beat you to elevate myself."  Pac has looked amazing since leaving WWE and is a brilliant mix of in-ring wizardry and character badassery.  Page is still growing as a performer and needs some character defining to really turn the corner.  This match should be a standout.

Pick: I'm going with Pac, as I think he's fully ready to be a top guy 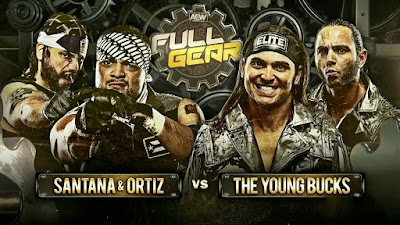 Maybe a bigger match than the Tag Title bout, this grudge match is another potential show stealer.  After being prematurely and unceremoniously eliminated from the title tournament, the Bucks shifted their attention to Chris Jericho's upstart tandem, and the animosity has been palpable.  I was worried that Matt and Nick's star power would be damaged by their shocking first-round elimination, but they recovered quickly by presenting this feud as so high-profile.  There's a five-on-five war brewing between The Elite and The Inner Circle, and this match will be a wild preview....

Pick: Santana & Ortiz should probably win the first round, even at the risk of hurting The Bucks as top attractions 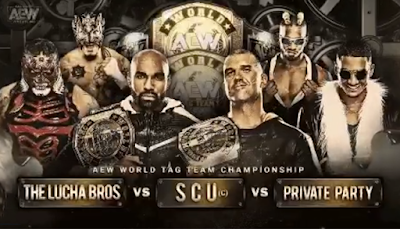 This will be insane.  Anything involving Lucha Bros is automatically nuts, but Private Party are fantastic young high-spot wrestlers, and SCU provide a great mix of grounded grappling and big spots.  The tag division in this company is fantastic so far.  Imagine if Scott Dawson and Dash Wilder are added to it next year.  Anyway, yet another match with show stealing potential.

Pick: SCU should retain in their first defense 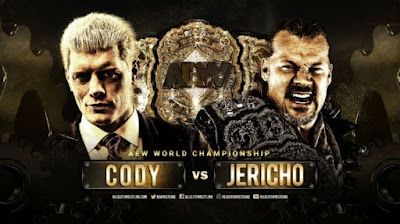 The build for this match has been old-school perfection.  A smarmy, chickenshit heel champion surrounded by an entourage, defending against a beloved, passionate babyface with a pro wrestling pedigree.  Cody's promo last night was fantastic, as was Jericho's amazingly hilarious video package.  My only complaint about this feud is the new stip that says if Cody doesn't win the belt he'll never challenge for it again.  They have now painted themselves into a corner.  If Cody loses they'll need to come up with some way around this stip in the future, thus cheapening it, but if Cody wins they'll have cut short Jericho's wonderful title run.  It's too soon to take the belt off him, but then Cody is so popular he'd be a great long-term babyface champion.  I just think Cody should chase the title for a while before he finally wins it.

Pick: With the stip Cody kinda has to win here 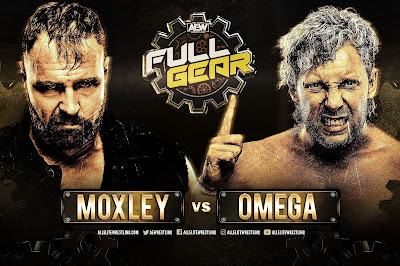 This feud has been boiling since Moxley's AEW debut at Double or Nothing; we were supposed to see this match at All Out but Moxley had a staph infection and Kenny fought a losing effort against Pac instead.  Now because of their history of pull-apart brawls this match has been made unsanctioned, meaning the win and loss won't count.  I don't like that idea much; if wins and losses are supposed to matter, how can the main event of a PPV not count?  But it's obviously a way to protect the loser.  Kenny's win-loss record isn't great so far, but if this doesn't affect it I suppose he can afford to lose this fight.  And I think that's the direction they're going.  Moxley is the company's no-DQ expert so he should win this type of match.  It also gives him a bigger chip on his shoulder if he beats AEW's golden boy but it doesn't count.  The match itself should be pretty awesome.


This show is loaded.  I count five potential Match of the Night winners, and hitting it out of the park on this PPV will surely create an even bigger buzz around this product.  It's a fun time to be a wrestling fan...