This Sunday is NJPW's last major show in Japan before the Tokyo Dome (they're returning to California next weekend but no word on what the cards look like yet), so let's take a gander at the half-card that's been announced for NJPW Power Struggle!

Power Struggle is one of the lesser major PPVs in the New Japan calendar but usually there are at least a handful of notable matchups and we get a further idea of what the WrestleKingdom card will be.  This year's show features two big singles championship matches plus the Super Junior Tag League final.  Let's predict some winners....

We've seen this match a thousand-or-so times, so this isn't the most exciting final I could've wished for.  But hopefully this will catapult Sho and Yoh back into title contention.  RPG3K vs. Ishimori and El Phantasmo would be a fine Jr. Tag Title match at the Dome I'd say.  This should be an okay match. 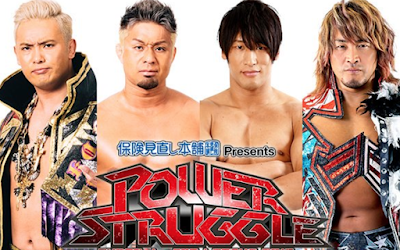 This is all about building up the Night 1 Dome main event (a match I'm quite pumped for), Okada vs. Ibushi.  Hashi seems out of place here but I guess he's the only choice left in CHAOS, what with Goto and Ishii being indisposed.  He's obviously there to take the pinfall.  Thus the logical pick is.... 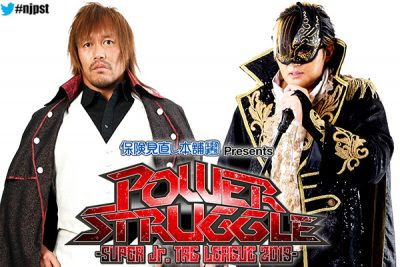 Here's one I don't care much for.  Haven't these two had pretty shoddy outings in the past?  Both these guys love to stall so half the match is probably gonna be that.  Naito needs a decisive win to get back on track.  I assume they're still toying with his pledge to unify the World and I-C belts? 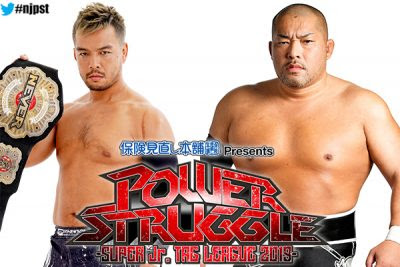 These guys had what should've been a pretty great match at Destruction, but it was derailed by an early-bout Kenta concussion.  Let's hope we get a match that lives up to its potential this time.  If that happens I'd say this steals the show.  Go forth and beateth the shit out of each other, gents, just watch the head. 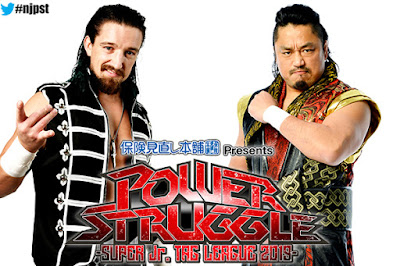 Mr. White is just beginning his third singles championship reign in New Japan and he's only the second man to have held the IWGP, Intercontinental and US Titles at one time or another.  White will obviously be in the second-night main event mix at the Dome, so I don't see him losing here.  This match should be quite good.

Well that's the show so far.  I'm sure the first four bouts will be tags and six-man tags, I'm just not sure why they haven't been announced yet.  Power Struggle will likely be an easy show to watch regardless, and then we'll be on the road to WrestleKingdom!