The NXT crew is nothing if not consistent.  This past weekend's TakeOver: WarGames show was yet another in the black & gold brand's loooooong line of good-to-excellent specials, a streamlined 4-match card featuring two double-cage schmozzes.  While not quite on the level of last year's WarGames, this nonetheless stole the weekend. 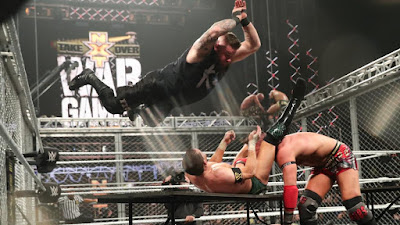 The first half of this double main event was, of course, the historic inaugural women's WarGames match, pitting Shayna Baszler, Io Shirai, Bianca Belair and Kay Lee Ray against Rhea Ripley, Candice LeRae, Tegan Nox and Dakota Kai (subbing for Mia Yim, who'd been attacked backstage during the kickoff show).  Longtime friends-turned-rivals LeRae and Shirai started the match and wrestled a fairly quick pace for the first five-minute period before Belair entered.  Candice took lots of punishment from both opponents before team captain Ripley entered, tossing in multitudes of weapons before officially getting in the ring (this took a bit too long considering Candice was in peril).  Ripley ran wild and looked like a total badass from the outset, before Kay Lee Ray entered to give the heels the numbers advantage again.  Ripley's next team member was supposed to be Dakota Kai, but Kai turned on her friend Tegan Nox, kicking her back into the on-deck cage and smashing her leg in the cage door.  Officials tried to pry her off, but she kept at it, even getting physical with William Regal.  The crowd went ballistic for this, and moreover it meant that Ripley's team had lost both the deserting Kai and the injured Nox.  Baszler entered, relishing the 4-on-2 advantage, and attempted to handcuff Ripley to the ropes before Candice made the save.  Candice hit a top rope reverse rana on Ray, but then Shirai came off the top of the cage with a gorgeous moonsault on Candice and Bianca, taking all three of them out for the remainder of the match.  Ripley whipped a trash can into an oncoming Ray (brutal-looking) and it was down to the two captains.  Shayna locked in the choke, but Ripley handcuffed herself to Baszler and then hit her with the Riptide through two chairs to get the shocking upset win.  This was a pretty great WarGames match, a step below last year's, but I'd say the best match of this show.  The story took unexpected twists, and while overcoming a 4-on-2 scenario is a tad unlikely, it was handled well and Ripley was a made woman by the end.  I said it in my Survivor Series review, but PUSH HER TO THE MOON RIGHT NOW.  ****1/2 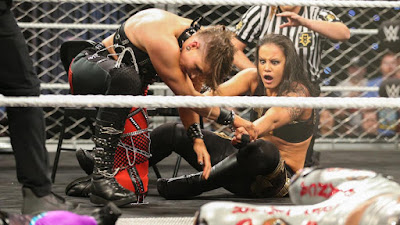 Given the unenviable task of following that match was the #1 Contender's 3-way of Pete Dunne, Damien Priest and Killian Dain.  These three cut a ferocious pace from the start, maybe too fast given how long they had to go.  There were a ton of big moves and reversals, and everything looked fantastic, but it was missing the flow that a great match should have.  Highlight moments included Dain using a Michinoku Driver on Dunne, on top of Priest, Priest Razor's Edge-ing Dunne onto an announce table, Priest hitting a heart-attack sudden corner dive, out of an Irish Whip, onto Dane on the floor, and Dain countering a chokehold with a senton onto Priest, leading to Dunne kicking Dain out of the ring and pinning Priest to win.  This would've been a great 15-minute match but it went almost 20 and was therefore just very good.  ***1/2 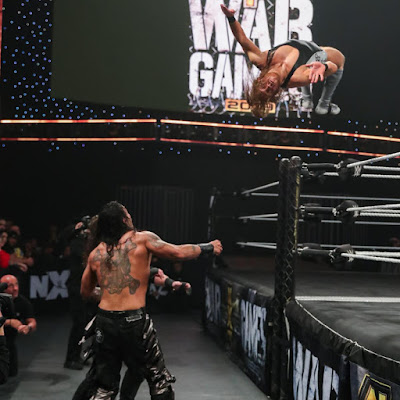 Finn Balor made his TakeOver return next, in a crisp bout against Matt Riddle that saw Finn looking more motivated than he has in years.  This was non-stop action for 15 minutes, which included Riddle trolling Goldberg with a spear/jackhammer combination, Balor countering a powerbomb attempt with a double-stomp, and finally escaping a Bro-mission and delivering the 1916 to get the win.  Nothing super fancy about this match, it was just an excellently worked homecoming match for Finn and another in Riddle's growing resume.  **** 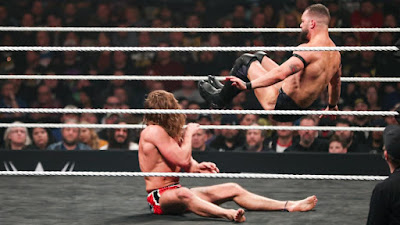 The men's WarGames match headlined, as Undisputed Era faced Tomasso Ciampa, Keith Lee, Dominic Dijakovic, and a mystery partner (who of course entered the fray last).  Ciampa and Roderick Strong started things out, and their five minutes was one of the better segments of the match, with nary a moment to breathe.  Kyle O'Reilly then entered and the heels double-teamed Ciampa until Dijakovic evened the odds with his superior power.  Bobby Fish was third for UE, and the heels took over once again, but Keith Lee flattened two of the heels with a crossbody.  Adam Cole was the final UE entrant, and he repeated the Ripley spot where he threw in a bunch of plunder before getting in, but he waited too long and Ciampa shoved him off the apron through a table on the floor.  Then it was time for the surprise partner, and after the countdown ended we got a delay of several seconds to build anticipation.  Then Kevin Owens' music hit and the place went nuts.  Owens sported his original NXT shirt, and ran wild.  With all eight men in the ring, the match officially started and we got a crazy series of big moves and finishers, including Cole hitting a Panama Sunrise on Owens, on the metal plate between the rings, plus a huge Keith Lee high crossbody from the top rope on several guys, and Dijakovic putting Fish through a table but getting caught with an O'Reilly triangle choke on top of another, which was broken up by an Owens frog splash.  But the finish to this bout was insane - Ciampa and Cole were fighting on top of the cage, and Ciampa lifted him up for an Air Raid Crash, all the way down through a table set up in the ring.  Just an absolutely brutal spot that I can't believe didn't result in injury.  Anyway, this match was a lot of fun but went probably 7 or 8 minutes too long and wasn't quite as satisfying as the women's bout.  Still it delivered big overall, so I'll give it ****. 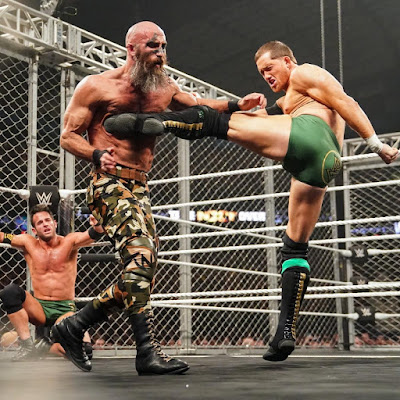 For about the thousandth time the NXT crew stole the weekend, with a pretty great TakeOver that featured three ****+ matches.  I liked the 2018 WarGames show better, but this was damn fun.

Best Match: Women's WarGames
Worst Match: Dunne vs. Dain vs. Priest by default, still very good.
What I'd Change: Cut about five minutes out of the triple threat and at least five out of the main event
Most Disappointing Match: Nothing
Most Pleasant Surprise: The storytelling of the women's match
Overall Rating: 8.5/10