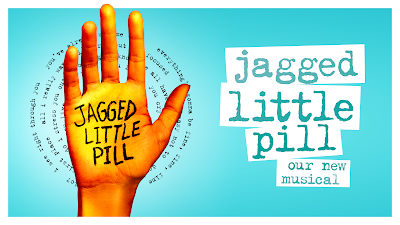 You are and have been the single greatest theatergoing experience of my life thus far.  I regret to inform you however, that your soundtrack's position of "music I choke back tears to on the way to work" is about to be usurped by the forthcoming soundtrack to Jagged Little Pill, the latest Broadway sensation based on the songs of Alanis Morissette.


What an emotional gut-punch this show is.  Jagged Little Pill uses Alanis's milestone album (plus several of her other tracks) as the inspiration and backbone for a family-centric drama that tackles issues of race, gender, sexual orientation, sexual assault, drug addiction, and marital strife.  That one show is able to juggle this many sociopolitical themes without stumbling over itself is remarkable, but book writer Diablo Cody (of Juno fame) weaves them over and around each other effortlessly, while introducing and developing an ensemble of relatable but flawed everyperson characters.

We open on an affluent suburban family.  The parents, Mary Jane and Steve, have a strained marriage, partly due to his being a workaholic and her behavior growing erratic after a car accident a year earlier.  Their son Nick is an overachiever (largely thanks to Mary Jane's incessant pushing), while their adopted African-American daughter Frankie is a high school activist who resents her parents' overcompensation at treating her as if she were white.  Tension ratchets up after Nick's best friend is accused of raping one of their classmates, while Frankie jilts her girlfriend Jo for a new boy at school.  What results is an emotionally and politically charged exploration of all these hot-button issues as each character is forced to confront their choices and relationships.

The performances by this extraordinary ensemble cast are all wonderfully poignant, and the arrangements and execution of Morissette's music are true to the spirit and brutal honesty of her original recordings.  Marveling at how effectively and seamlessly the songs are incorporated and repurposed, I was reminded why I fell in love with Alanis's megahit album in the first place.  These songs resonate well beyond their mid-90s timeframe, examining universal subjects and emotions with a stunning, raw frankness almost unheard of in pop music.  Their application in this show adds new layers of empathy and relevance, providing numerous choke-up moments as these characters are cracked open and spilled out. 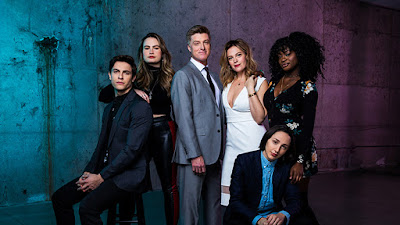 Of this stellar ensemble cast, the standouts for me are Elizabeth Stanley as Mary Jane, who brilliantly conveys a usually controlled woman slowly coming apart at the seams, Celia Gooding as Frankie, defiantly railing against her uptight upbringing and closed-minded suburban environment, and maybe the show stealer, Lauren Patten as Frankie's lover Jo, whose parents are hellbent on converting her into a good little hetero Christian.  Patten seethes under the surface, even as she uses sarcastic humor as a defense mechanism.  When her sardonic security wall finally comes crumbling down she scorches the theater with a breathtaking (I don't mean that figuratively, I actually became short of breath during this) rendition of Alanis's best-known song "You Oughta Know," that literally stops the show.  Patten is a talent to keep your eyes on - might as well at any rate; you won't be able to look away when she gets going.

Aside from the aforementioned show stopper, other killer numbers include "That I Would Be Good," "Wake Up," visually stunning Act I closer "Forgiven," and a haunting use of "Uninvited."  The staging and choreography is kinetic and full of energy, providing a lively backdrop for the drama, while the band is tight as a drum and mostly stays true to the orchestration of the original tunes.

Jagged Little Pill is a riveting, evocative, heartbreaking, cathartic, and at times hilarious drama that serves as both a reflection of our time and a love letter to the music that inspired it.  Alanis Morissette and everyone else involved in creating this show should be proud of the unforgettable experience they've crafted.  Rush out and see Jagged Little Pill.


Jagged Little Pill is currently in previews at the Broadhurst Theatre in Manhattan, and its official opening night is December 5th, 2019.