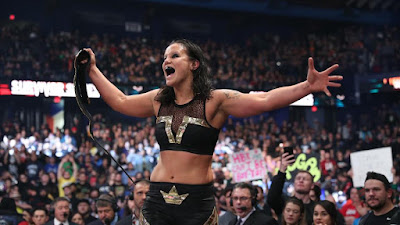 Welp, you could say many things about the 2019 Survivor Series, but one thing you can't say is that they didn't do their damndest to get NXT over.  Triple H's upstart crew took four of the seven head-to-head-to-head matchups and it was clear from the crowd reactions that NXT is the show WWE fans are into these days.  And with good reason; their roster is stacked to the gills with talent and their booking is mostly strong.  Going into this show I wasn't sure what to expect as far as mixing Triple H's booking philosophy with Vince's usual approach.  There were things that didn't make sense to be sure, and choices that were baffling and annoying, but for the most part this show worked really well for me.  For the fourth year in a row the Survivor Series mostly delivered, at times in spite of itself.  Say what you will about the idiocy of brand vs. brand, but this annual tradition has brought us some very good Survivor Series PPVs in recent years.  Yes, the triple threat approach was unwieldy and got old by the end, particularly in the main event, but I'll take a show like this over just about anything the main roster churns out right now.  So let's take the deep dive....

The show opened with the women's elimination match, with Charlotte Flair leading the RAW team against Sasha Banks's Smackdown squad and Rhea Ripley's NXT faction.  First off, let me applaud WWE for bringing the elimination match teams out all at once instead of giving all fifteen participants their own entrances.  I actually read a review complaining about this, and to that I say "Would you rather they spent 20 minutes on entrances for these two matches?"  Anyway, I think these matches would've been better if only two people were allowed in the ring at a time, but for some reason it was triple threat rules.  Still, most of the participants got a bit of time to shine.  Io Shirai and Kairi Sane had some good early exchanges, Carmella had an amusing moment where she kept trying to cover two downed opponents and screamed every time they kicked out, Charlotte and Bianca Belair got a nice battle of the super-athletic women, and Rhea Ripley came off like a fucking superstar.  Push this woman to the moon - she has IT.  The first two eliminations came, bafflingly, after a series of outside the ring dives, which apparently left Io and Candace LaRae "injured."  They were helped to the back, leaving NXT at a two-woman disadvantage.  No idea why they did this, as both of them showed up again at the end and were fine.  This was handled badly, but it's my only real complaint about this match.  NXT eventually evened the odds and more, not losing another member until RAW and Smackdown were down to one woman each.  Charlotte and Asuka got into a shoving match, after which Asuka sprayed mist at Charlotte and walked out, Bad News Brown-style.  Sasha and Natalya eliminated Toni Storm with a double-submission and then hit a Hart Attack on Belair to get it down to one-on-one-on-one.  Sasha then turned on Nattie and pinned her, and we were down to Sasha vs. Ripley.  These two had some nice exchanges and I definitely want to see more of this matchup.  Suddenly Io and Candace showed up to interfere and help Ripley put away Sasha.  Io hit a springboard dropkick and Ripley nailed the Riptide for the win.  I assume Ripley was the sole survivor but they didn't make it clear if Io and Candace were actually eliminated or not.  Regardless, I enjoyed this match a lot and the right team won.  Ripley should be the one to dethrone Shayna Baszler.  ***3/4 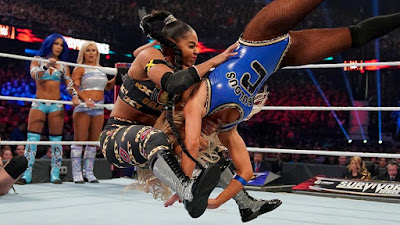 Next up was AJ Styles vs. Shinsuke Nakamura vs. Roderick Strong.  These guys worked very hard and delivered a very good match that could be seen as a mild disappointment given their talent, though I daresay it was almost entirely because the usually rabid Chicago crowd was subdued for basically this whole show.  There was little heat for most of this, but they won them over by the end, with tons of nearfalls and reversals, leading to AJ hitting Nakamura with the Phenomenal Forearm, only for Strong to toss AJ out and steal the pinfall.  I liked this match quite a bit, and in front of a hotter crowd it'd easily be over four stars.  On balance I'll give it ***3/4. 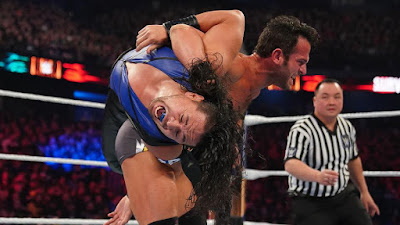 The match that arguably stole the show was Adam Cole vs. Pete Dunne for the NXT Title.  That Cole was even able to walk, let alone wrestle, after taking an Air Raid Crash off the top of the WarGames cage the night before, is miraculous.  The story of this match was Dunne's bad knee vs. Cole's injured ribs, and both came into play at various points.  Like the previous match, the crowd was very quiet for this but the guys won them over, and by the end they were super into everything, starting with Cole countering a Dunne moonsault by superkicking him in midair.  He followed that up with a Panama Sunrise on the ring apron, which looked absolutely sick.  Dunne barely made the count back in and ate a superkick that knocked out his mouthpiece.  Dunne did his finger-snap move but Cole hit another Panama Sunrise and the Last Shot to retain the title.  This was excellent.  ****1/4 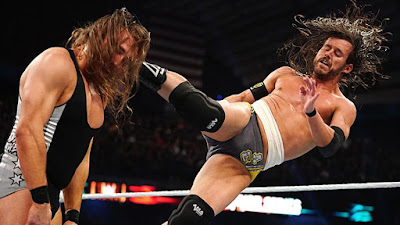 It was very odd to see a gritty, straight-up NXT-style match followed by a cartoonish Fiend match, but Bray Wyatt and Daniel Bryan delivered about as good a match as can be expected given the restrictions of this character.  I'm not sure how they can balance the goofy theatrics with good wrestling, but they need to figure that out or the Fiend thing is gonna get old real fast.  Lose the red lighting and make Wyatt's comebacks more organic and less Undertakery.  Wyatt dominated most of the match but Bryan made a comeback that the crowd bought into, hitting repeated missle dropkicks and Yes kicks, and finally the running knee.  Wyatt came back and went for Sister Abigail, but Bryan countered with a rollup for a very believable nearfall.  Bryan charged but Wyatt caught him with a Mandible Claw for the pin.  Not a great match but a good one, and easily The Fiend's best so far.  ***

The men's elimination match ran the gamut of really satisfying WWE/NXT action and nonsensical WWE booking.  The early and middle portions of the bout featured a series of rushed eliminations that shortchanged several very over guys.  But by the end the match got pretty great and made a potential new star in Keith Lee.  The most over guy in the match at the beginning was Walter, who got some good moments with Braun Strowman but was then unceremoniously Samoa Joed by a Drew McIntyre Claymore Kick, and the fans were pissed.  But like last year's men's match, they worked hard to win them back over.  Matt Riddle and Chad Gable got some nice exchanges in before Kevin Owens eliminated Gable.  Owens ran wild on the floor, hitting Roman Reigns with a cannonball and stunning Baron Corbin, but was caught on his way back in with a Ciampa draping DDT for the elimination (Way too much "guy runs wild and then gets pinned" in this match).  Damien Priest was bafflingly eliminated by Randy Orton without even getting to do anything; why was he even here?  Matt Riddle quickly rolled up Orton for a big elimination, but then Orton RKO'd him, allowing Corbin to pin him and kinda negating his big moment.  Braun Strowman got counted out after colliding with Keith Lee on the outside and eating a Claymore Kick; having a countout in a triple threat match doesn't make much sense, but whatever.  Ricochet was taken out by Corbin's End of Days, while Mustafa Ali got yelled at by Corbin for hitting a dive on him, Ciampa and Seth Rollins, distracting him long enough for Seth to hit a Curb Stomp and pin him.  Roman was pissed about this and speared Corbin, sacrificing his own partner and allowing Ciampa to eliminate him.  The last members of their respective teams, Seth and Roman teamed up to take out Ciampa, and it was down to those two and Keith Lee.  Lee countered a Stomp attempt with a jackhammer to pin Seth, a huge moment for Lee, and then had a fierce final exchange with Roman.  Lee got a nearfall with a sitout powerbomb, but eventually got hit with the spear to give Reigns the win, after which Reigns endorsed Lee with a fistbump.  Aside from the usual dumb WWE booking in spots, this match was a lot of fun and made Lee look like a burgeoning star.  ****

The final two matches were the weakest for me.  Brock Lesnar and Rey Mysterio had good heat but their match was too short and basic to amount to much.  Brock did his usual domination as Rey kept trying to get his lead pipe.  Rey's son Dominic ran down with a towel, pleading for Brock to stop, but Brock threw away the towel and went after Dom.  Rey got in a low blow, Dominic did the same, and they hit a double 619 followed by a pair of top rope splashes for a nearfall.  But Brock hit a huge German suplex on Dom and F5'd Rey to retain in just seven minutes.  Not much to this.  **1/4 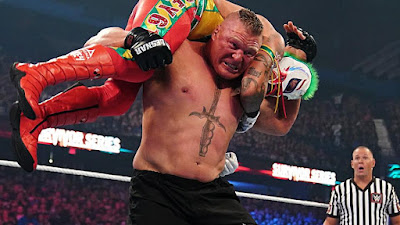 I was pleased to see the women's triple threat take the main event slot and hoped for a better crowd than greeted Becky's coronation at WrestleMania.  Alas, the action in this match wasn't good enough to get them into it.  Like Ronda Rousey, Shayna Baszler is really good at a specific type of match, but a triple threat isn't it.  I feel like Becky struggles in these matches too.  Bayley seemed the most comfortable here and actually controlled a lot of the action.  More than anything else this appeared to set up Becky vs. Shayna at WrestleMania, which I'm all for, but sadly this match was very nondescript.  The finish came when Shayna slammed Becky on a table, then countered a Bayley top rope elbow into her choke hold for the tapout, giving NXT a 4-2-1 lead for the night and establishing Shayna as a big deal.  Becky attacked her after the match and ledropped her through the table to further this feud.  A disappointing main event.  **1/2 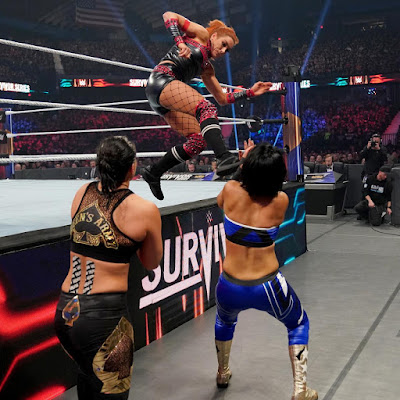 So this Survivor Series was definitely not as good as last year's, but it was certainly better than 2017.  We got two very fun elimination matches, two really good undercard matches, and three just-okay matches.  I wish the final two bouts were better, as the show felt like it petered out after the men's elimination match.  But this was easily one of the best main roster shows of the year and made NXT look like a million bucks.  I'll take that win.

Best Match: Adam Cole vs. Pete Dunne
Worst Match: Brock Lesnar vs. Rey Mysterio
What I'd Change: Not sure how I'd change the order, but putting two of the weakest matches on last definitely hurt the show a bit.  The men's elimination match definitely needed some changes.  Walter, Priest and Riddle deserved way more time.
Most Disappointing Match: Becky vs. Shayna vs. Bayley
Most Pleasant Surprise: I guess I underestimated Cole and Dunne
Overall Rating: 8/10
Better than WrestleMania, Royal Rumble and/or SummerSlam? - I'd say probably, yes and yes.


Posted by Justin Enuffa Ballard at 11:56 AM