Welcome to the official Enuffa.com predictions for this Monday's NJPW WrestleKingdom 10!

Well folks, I have now been a die-hard New Japan fan for a full year.  It was just before WK9 that I subscribed to the NJPWWorld.com network, and I've had not one regret since.  This company is light years ahead of anything else on the wrestling market these days (NXT is the only one that comes close), and January 4th is the date of their biggest PPV of the year, in Japan's most prestigious venue.  The last three WrestleKingdom shows have been absolutely tremendous, particularly last year's WK9 which I consider one of the two or three best PPVs I've ever seen.  Astonishingly, on paper this year's show looks even better than that one.  WrestleKingdom 10 will boast a streamlined nine-match card (plus a pre-show Rumble), and not one looks like a throwaway.  The main event is a rematch of last year's epic WK showdown, and the semi-main is a dream bout New Japan fans have been looking forward to for nearly two years.  Also the Ring of Honor World Title will be up for grabs on this show, New Japan will crown inaugural Six-Man Tag Champs, and every match but one is for a Championship.  This is as stacked a show as I can imagine this company putting together, and I'm breathless with anticipation.  We're going to see something really special next Monday. 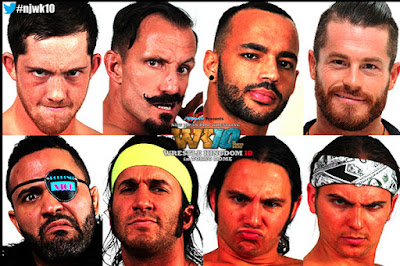 As with the last two WK shows, this year's extravaganza will open with a 4-way tag match.  While I would've liked to see just reDRagon vs. Sydal & Ricochet, I'm certainly not complaining about this.  These wild aerial-fests are always a fun way to kick off the show and I expect some great fireworks between these four teams.  O'Reilly and Fish have held the Jr. Tag belts for several months so I could easily see them dropping to one of the challengers.

Justin's pick: I think Sydal & Ricochet take it down.  This exciting new team has a very bright future in NJPW and I'd love to see them dominate the Jr. division for a while before graduating to the Heavyweights. 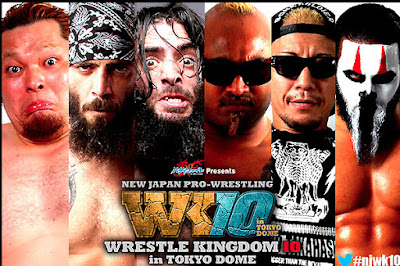 Initially I figured this for the obligatory six-minute throwaway match, but when it was announced that this would be Jay & Mark Briscoe's New Japan debut AND a match to crown the first 6-Man Champs, this became a whole new ballgame.  I'm loving the burgeoning relationship between NJPW and Ring of Honor, and it'll be loads of fun seeing the Briscoes on this big a stage.  I don't expect this to go much past ten minutes but it'll be a crazy brawl I'm sure.

Justin's pick: Yano & The Briscoes have to win here I would think.  No way Jay & Mark lose in their debut. 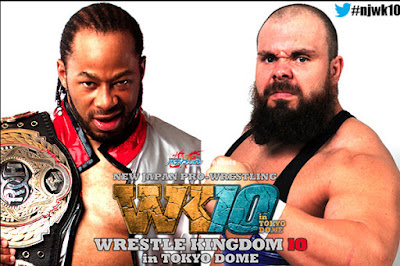 WK10 will also be Jay Lethal's New Japan debut, and adding an ROH World Title match to the card just makes it feel that much more stacked.  Elgin's already dipped his feet in the NJPW pool, having worked the G1 Climax tournament.  He wasn't a point leader by any means but he definitely looked right at home among New Japan's roster.  This match should be an excellent undercard-type match to begin the long crescendo toward the main event.

Justin's pick: This could go either way but somehow I would think ROH would reserve title changes for ROH PPVs.  I'll stick with Lethal to retain. 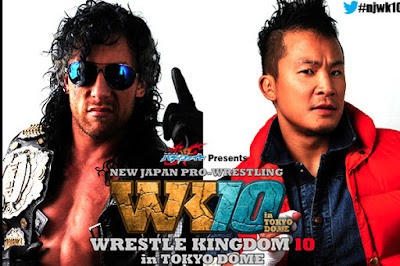 This will be their third PPV meeting, and a rubber match.  Both previous Omega-Kushida bouts have been quite good (the first especially), and I expect no different here.  Omega is a superb heel representative for this division and I imagine that will continue. 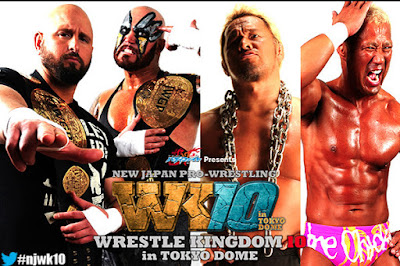 The one weak spot on New Japan's roster continues to be its heavyweight tag division.  Aside from Champs Anderson & Gallows there haven't been any full-time heavyweight teams over the past few years.  It may be time to combine both sets of belts into a NEVER Openweight Tag Title, so the teams can be mixed up and the division deepened.  Either that or NJPW needs to import some teams to keep Karl & Doc busy.  Makabe & Honma do present a formidable challenge to the Champs, and it would be very cool to see Honma finally capture gold.

Justin's pick: I'm going with G.B.H. to win the straps for a few months. 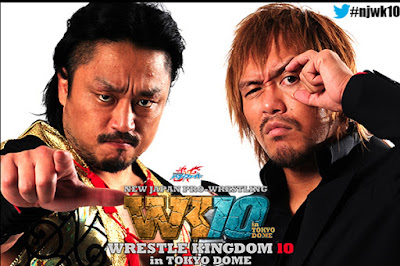 This grudge match came about a few months ago when Naito, sporting a new heel persona, became embroiled in a feud with Goto's ally Shibata.  Naito then brought in Takaaki Watanabe as his sidekick Evil, and Goto came to Shibata's aid.  Goto had a brief match with Evil at Power Struggle which ended in a post-match beatdown, and now Goto is out for revenge on Naito.  The late placement on this card indicates the importance New Japan is placing on this feud.  Naito in particular seems primed for a semi-main event (or possibly even main event) push, as his heel tactics are clearly getting over.  I could see him feud with one of the upper singles champions over the next year. 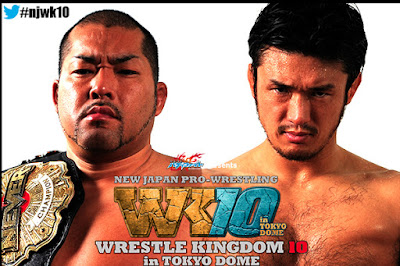 Oh man, this one's gonna be brutal.  Ishii and Shibata are two of the stiffest brawlers in the company and I anticipate them pulling out all the stops here.  Look for some cringe-inducingly painful offense from both guys and a somewhat short but intense battle rivaling WK9's Ishii-Makabe slugfest. 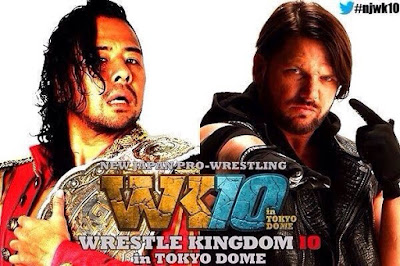 I'm calling it now, if both guys are healthy going in (Not sure about that with AJ's back issues), Nak vs. AJ is the 2016 Match of the Year.  This is the most anticipated match in my short time as a New Japan fan and I would be stunned if this didn't steal the show, a la Nak's WK9 bout with Kota Ibushi.  These are my two favorite wrestlers in New Japan and I can't imagine a more exciting pairing.  I don't care who wins or loses, I just wanna see it happen.

Justin's pick: Hard to call since both guys' contracts are up soon.  It's been rumored that NXT is interested in one or both of them, and while I do love NXT I honestly don't want to see either guy leave New Japan.  So hopefully both will re-sign and this will be the first of several bouts between the two.  Given AJ's back problems of late I imagine he'll take some time off after this show.  So Nak will likely retain, but hopefully we'll get to see this match again. 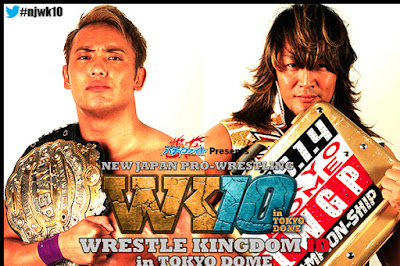 Wrestling matches in 2016 don't get any bigger than this.  Okada vs. Tanahashi is arguably the greatest rivalry in the company's history, and despite having seen them fight seven times before, it's a match I don't ever get tired of.  Like Rock-Austin or Flair-Steamboat, these two seem tailor-made to fight each other, and they somehow manage to build on their previous work to make each bout better than the last.  There's no question who's winning this thing, it's clearly Okada's time to finally carry the ball as NJPW's top guy.  But goddamn it's gonna be fun to watch.