Welcome to another edition of Beer Brawl, here at Enuffa.com!

This past weekend my wife Kelly and I visited not one, not two, not three, but FOUR breweries in and around Somerville, MA, and thought we'd share something of our experience.  You may recall that last year we hit up Night Shift and Idle Hands, formerly in Everett.  In that showdown we overwhelmingly favored one over the other, but this time the winner wasn't quite as decisive.  So let's get to bidness....

Our first stop was the strangely situated Downeast Cider House, located literally under the Tobin Bridge.  Downeast offers tours of their facility but we arrived during a rush and were informed there was a 1-2 hour wait.  So instead we enjoyed the outdoor drinking area, featuring several lawn chairs, high tables and a game of cornhole.  We first sampled the four available varieties and then settled on a full pour of our respective favorite.

I've only recently begun venturing into the hard cider realm, and a year ago I wouldn't have given it a second look.  But as someone who suffers from mild gluten intolerance I've been attempting to expand my alcohol options.  While many ciders are too sweet for me, I have managed to find a few I enjoy.

Original - Downeast's flagship cider is exactly what you'd expect; a mixture of sweetness and tartness with a refreshing bite.

Cranberry - This was my least favorite of the four since I'm not much of a cranberry guy.  But the cranberry was fairly understated.  I wouldn't go out of my way for this one but I wouldn't refuse it either.

Maple Pecan - My favorite of the four, much to my surprise.  The maple flavor doesn't kick in until about a second after you take a sip, and it doesn't bash you in the face either.  Really interesting combination.  We bought a growler of this one and I also had a full pour of it.

Lemonade Ginger - I had mixed feelings about this one.  I love lemony things, and I enjoy a bit of ginger.  I found the ginger flavor maybe a tad too prevalent.  This seems like a cider I could only drink in small doses. 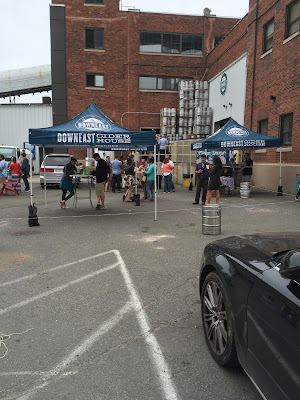 Kelly's Take: I loved them all.

The Lemon Ginger was one of my faves, but even better when combined with the Cranberry as suggested by the barkeep.  (Yes, I said barkeep).

Cool atmosphere, worth going under the Tobin for.

I liked how fresh each one tasted, and how simple each one was.  Did not at all seem overprocessed, or tinny tasting like some ciders can be.


Slumbrew boasts a quirky pub atmosphere, with a full food menu, the option of pints or tasting flights, and a bookshelf full of board games.  This is an exceedingly fun room and I could see myself frequenting this brewery as I would a local watering hole.  The on-tap selection was varied and delicious as well.  Kelly and I each got a flight with two common beers and two differing ones. 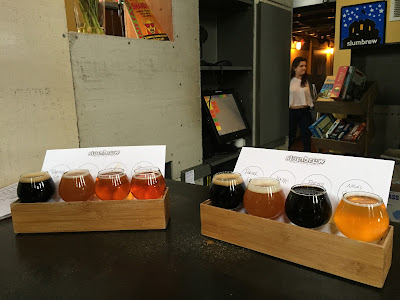 Happy Sol - This is a blood orange-infused hefeweizen with a nice citrus/wyeast flavor combination.
Justin: As someone with a weakness for hefs, this was an early favorite of mine.

Kelly: Agreed. It made my tongue happy.


GF Yourself - A gluten-removed pale ale

Justin: Gluten-removed is definitely the way to go for anyone who doesn't have severe celiac.  Unlike gluten-free beers made from alternate grains, this is made with traditional beer grains, after which the gluten is broken down by an enzyme, thus it still tastes like a beer.  Very balanced for a pale ale.  I'm not the biggest pale ale fan but I'd drink this.

Kelly: This was the best of anything gluten sensitive that I've tried. I'm excited for Justin to have found something that tastes like beer and not imposter beer.


Trekker Trippel - Like the name suggests, a Belgian trippel ale

Justin: This was malty and sweet like a saison and tasted bourbon barrel aged (Which would certainly explain the 9% ABV).  The dominant flavor is the bourbon, which would normally bug me but it wasn't overwhelming here.

Kelly: Yes. This is a true statement.

Justin: I love porters and stouts, and this was nice and chocolaty.  Very rich without being overfilling.

Kelly: Definitely an easy-drinking porter. I would love to drink this with a nice piece of dark chocolate cake. It would go perfectly.


Porter for Paradise - Another porter with a much different bouquet and flavor, aged on toasted coconut and coffee

Justin: COFFEE.  This smells like an espresso and tastes almost creamy.  If you like coffee you'll love this.  Essentially hard coffee.

Kelly: This is one of the most coffee-focused porters I've tried. Not very carbonated; I wish it were a bit more bubbly, but I'd love to try it paired with something rich and beefy. 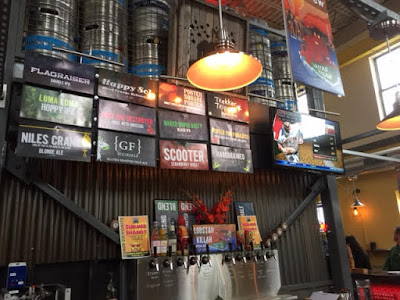 Justin: A very neutral, basic drinking beer.  I could see myself downing a bunch of 'em.

Kelly: Easy drinking for sure. Simple hot afternoon beer. Betcha it would be good by the pool straight out of the cooler.


Justin: In addition to the beers we split a plate of barbacoa tacos, with really tasty seasoned beef, tomatoes, onions, cheddar and lime sour cream.  This went well with the lighter beers. Kelly preferred it with the Happy Sol, but the Niles Crane worked with it as well. It also went alright with the Porter Square, but not quite right with the Porter for Paradise.

Kelly: The Barbacoa was definitely the star player of the tacos. All of the additions were perfectly balanced with the flavor, and the corn tortillas had a great texture. The rice was very plain, but came in handy as a carb-sponge for the booze.


The CBC is essentially a restaurant that happens to have a microbrewery inside.  We didn't sample the food but I ordered a tasting flight and Kelly just got a pint of a Hefeweizen with a gose twist, which she wasn't in love with. 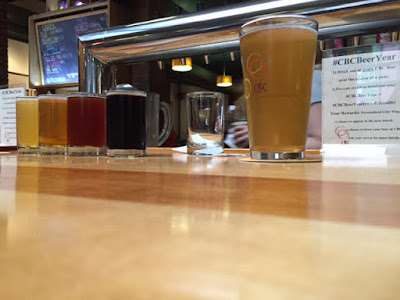 House Lager - This was nice and light.  Nothing fancy, easy to drink, probably by the caseload.

Tall Tale Pale Ale - Your typical hoppy and basic pale ale.  Pretty balanced so the hops don't stomp all over everything else.

Cambridge Amber - This had notes of caramel and malt; kinda sweet but not too heavy.

Charles River Porter - Easily the best of the bunch, with a nice chocolaty flavor.  Strangely pretty light for a porter.

Kelly: Reminded me of chocolate beer from my childhood... Wait.


Our final stop was Aeronaut, which includes the brewery and several other food counters, live music, art for sale, and video games projected on the wall.  The venue is very quirky and artsy.  Unfortunately the experimental art-rock band that night was a distraction rather than an enhancement.  But the beer itself was top-notch.  I got another tasting flight while Kelly had a pint of the Saison. 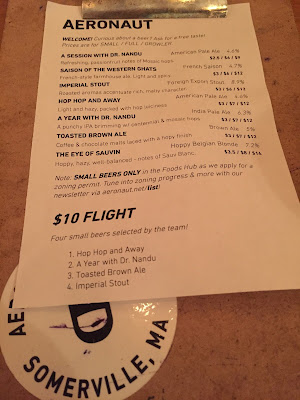 A Year with Dr. Nandu - A bolder IPA, which was plenty hoppy but not overpowering.  This had a good balance and a bit of a tanginess to it.

Toasted Brown Ale - This had almost stout flavor, with hints of chocolate and coffee.  The color looked like a stout more than a brown ale.

Imperial Stout - With an 8.1% ABV, this was a very rich stout that had a sweet malty flavor and hints of chocolate.

Saison of The Western Ghats - A French-style saison with a nice Belgian wyeast flavor and a hint of orange.  Probably the best Aeronaut beer we tried. 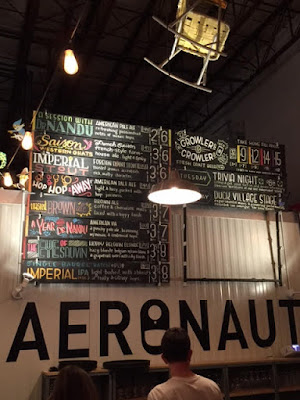 It's safe to say our brewery tour was a rousing success.  We enjoyed all four venues on some level, but the two standouts were Slumbrew and Aeronaut.  Both had a fun, inviting atmosphere and excellent beers on tap.  But which was our absolute favorite?

Kelly: I like Slumbrew. Just more my style. The food was good and I'd go back and try other dishes for sure. Loved the overall atmosphere and would have stayed for several pours if we didn't have other places to be.  Aeronaut was cool, and maybe on another day might be more tolerable. But that music was just awful. I get that some people might like it, so I hate to see that be the thing that took that brewery down a notch, but I felt like it was a visit to a strange land, and I was not as excited about sticking around there.

Justin: I agree.  The beers were comparable but the atmosphere and food put Slumbrew over the top for me as well.