Last week my family and I ventured up to Portland, Maine for a Sea Dogs game (They're the Red Sox AA team - go up for a game if you get a chance) and to check out some local breweries.  We did the obligatory stop-off at Shipyard but also did a tasting and a light lunch at Liquid Riot, a brewery/distillery and resto-bar right on the water, with indoor and outdoor seating (we opted for the latter).

Inside the venue has kind of a utilitiarian, industrial feel, with visible HVAC and bare cement floors, complete with a full view of the brewery floor behind the bar.  There is very ample seating both at the bar and around the room, plus pool tables in case you fancy a game of billiards.  The outside seating consists of a back deck overlooking the docks - nothing fancy out there and the view is a bit obstructed by other seaside businesses, but on a nice day you could do worse. 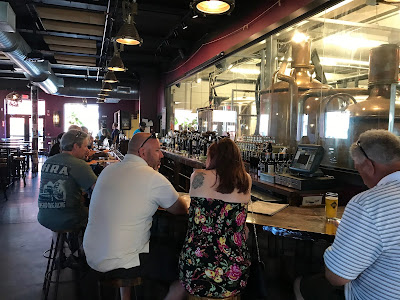 Our lunch consisted of two shared apps.  The first was house cut fries, which come with two sauces - we went with ketchup and beer cheese.  The cheese wasn't the most flavorful - it was inoffensive but fairly bland; I've had better in this department.  The fries however were quite good, freshly made and seasoned with sea salt.  The other app was the veggie nachos, which seemed rather phoned in to me - they were topped with black beans, avacado, cherry tomatoes (whole ones, which I found odd), cheese sauce (never a proper substitute for freshly grated cheddar) and a few other things, but the toppings were a bit skimpy and the dish didn't have much personality.  I'm not sure how their various sandwiches, sliders and fish tacos are, but the apps left something to be desired for me. 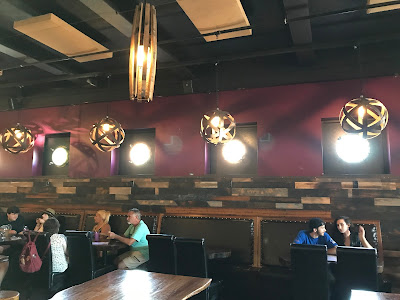 Fortunately the beer was the main attraction (I don't drink whiskey), and Liquid Riot has some fine craft libations to offer.  Below are the five beers I tried, followed by my take on each: 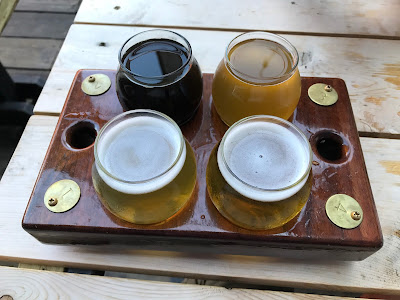 I liked this one a lot.  The Albino had a very unusual mix of flavors, with the vanilla and cocoa playing off each other well.  This beer is super smooth and rich.

The lager was light and crisp with a Pilsner edge to it.  Easy-drinking summertime fare.

This was very similar to the lager and also had a bit of that Pilsner sourness to it.  The Bunyan and the Lagerbier were fairly interchangeable for me.

This one was my favorite of the day.  I love a good coffee stout, odd considering I am by no means a coffee connoisseur, and the coffee here was front and center, giving this a bold, robust flavor.  I liked this one so much I got a full pint after my tasting flight.

Liquid Riot has a host of other beers as well, including a couple IPAs, a pilsner, and two sour ales.  Plus their gift shop offers cans and bottles, souvenir glasses (one of which I picked up) and other paraphernalia.

This brewery has a lot of personality, and their beer matches that with plenty of variety and unique flavor options.  I wasn't crazy about the food, so there's room for improvement there, but if you're just looking for some good brews, check out Liquid Riot. 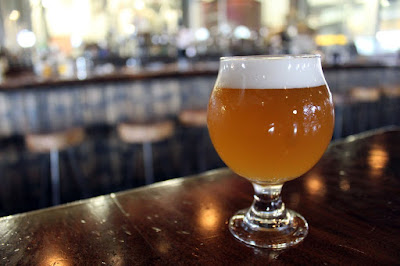