Welcome to another Brewery Reviewery, here at Enuffa.com, where I visit a local purveyor craft beer and let you all know what I think of it.  This past weekend we took a gander at 10th District Brewing Company, in Abington, MA!


This modest-sized taproom opened in 2014 and has a layout similar to that of a takeout pizzeria, with just a few tables and most of the space occupied by the brewing floor.  It's fairly no-frills, but there are some board games and a couple TVs to keep you entertained as you enjoy some beverages.  The two-man staff (at least on the day I was there) is friendly and happy to have your business as you sample the beer roster.  If you need some sustenance they often partner with a food truck which parks outside for the day. 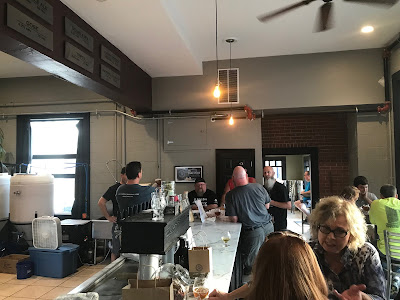 Currently there are eight offerings on the menu (see below), and I was able to try four of them (including one not shown on the menu). 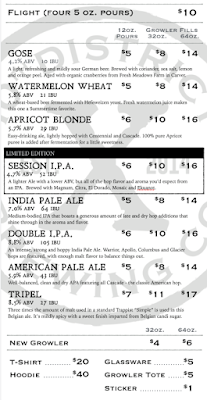 Tripel - I started with an old reliable; as a diehard Belgian beer fan I was overjoyed to see this on the menu.  This tripel was a pretty excellent take on the traditional style, with robust body, strong wyeast flavor and a slightly bitter finish.  At 8.75% ABV this'll get you feelin' good in no time.  This was my favorite of the day, and I picked up a growler of it to enjoy at home.

Extra Special Bitter - This English style ale, not on the paper menu, was a welcome surprise.  For those not familiar with ESB, they actually aren't very bitter at all and in fact have more of a malt-forward taste.  This was very smooth and easy to drink, and superior to Shipyard's version.  I'd order this again in a heartbeat.

Gose - There are a couple categories of goses; one is the sour variety which I'm not fond of, and the other is more floral with cucumbery notes.  10th District's gose is the latter, and I actually liked this pretty well.  It's light and crisp, and the flavor is understated, like a pleasant spring morning.

IPA - The final one I tried was in growler form.  I've never been much of an IPA guy, though there are exceptions when the flavor is a little more subtle and balanced.  This one for me was kind of a typical IPA, where I liked the hoppy aroma better than the flavor.  It's a perfectly solid IPA and if you're an enthusiast you'll dig it.  It just lacked the nuance I generally prefer in that type of beer. 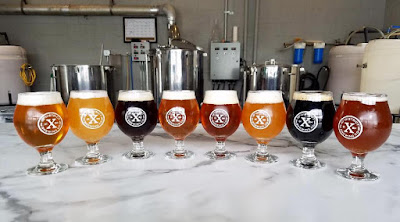 I also picked up two of their goblet-style glasses; at five bucks a pop that's a steal (They also have pint glasses available at the same price).